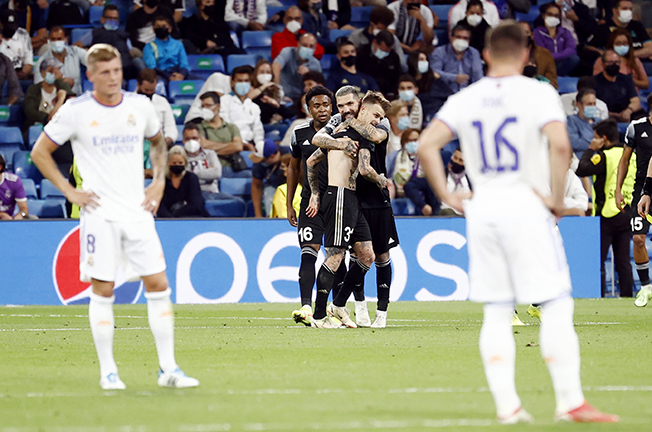 According to Gracenote, minnows Sheriff had a 1.4% chance of winning the match

Moldovan club Sheriff Tiraspol pulled off one of the biggest upsets in Champions League history when they beat Real Madrid 2-1 and their win has been ranked the most shocking since the Euro Club Index was launched by data analysts Nielsen’s Gracenote in 2010.

Champions League debutants Sheriff pulled off a miracle at the Bernabeu on Tuesday as a first-half goal from Jasurbek Yakhshiboev and a stunning 89th-minute strike from Sebastien Thill helped them beat the 13-times European champions.

According to Gracenote, minnows Sheriff had a 1.4% chance of winning the match.

The previous biggest shock had been Celtic’s 2-1 win over Barcelona in November 2012, where the Scottish club had a 7.1% chance of victory against the Catalans.

Atalanta’s 2-0 away win over Liverpool in November last year was ranked third in the most surprising wins in the competition, followed by Ajax’s 4-1 thrashing of Real in March 2019.

Lyon’s 3-1 away victory against City in August last year was ranked eighth, followed by Swiss club Basel’s 2-1 win away to Chelsea in September 2013. Manchester United’s 2-1 win at Juventus in November 2018 completed the top-10 list.