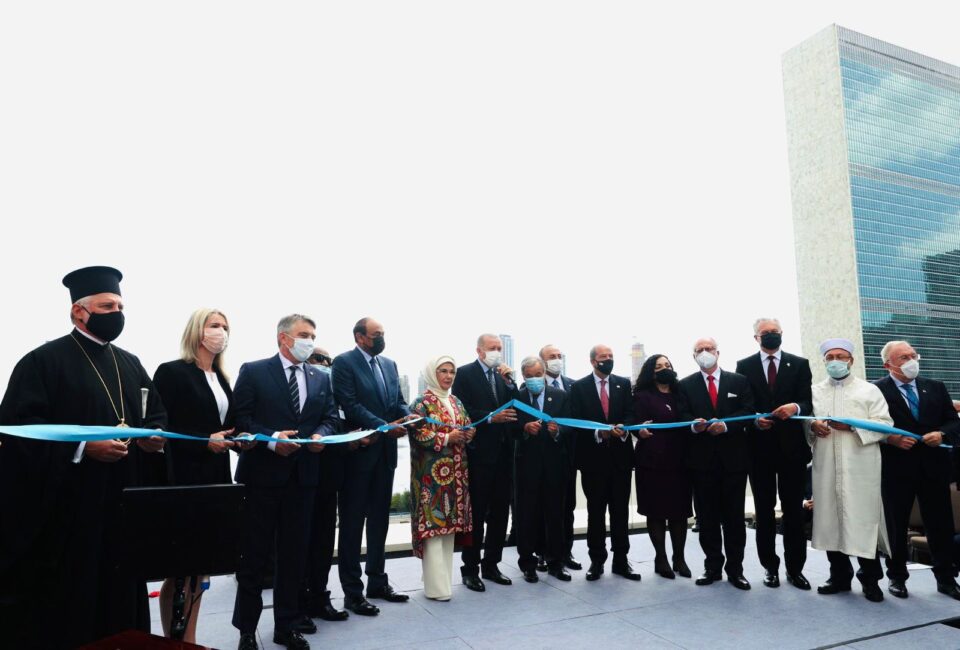 A defence of Archbishop Elpidophoros, the Greek Orthodox church religious leader in the US

My eyes filled with tears. I was reading the public apology of Archbishop Elpidophoros of America, which was written to diaspora Greeks and to Cypriot Hellenism. Has anyone considered how Archbishop Elpidophoros, with his ecumenical vision, felt when he was blessing the Turkish House in New York? What could he have felt as he stood next to Erdogan, who only last July converted the Haghia Sophia into a mosque?

Has anyone realized the archbishop’s fortitude as he attended the ceremony with the sole purpose of reminding us that the flame of the Phanar (Ecumenical Patriarchate of Constantinople) is still burning, emitting strength and hope? The Cyprus problem cannot be solved by comingling the global with the local, but rather by elevating the issue to an international level on the basis of violation of fundamental human rights and freedoms.

What I have to say is this: I salute Archbishop Elpidophoros for being thoroughly Ecumenical.

Since the time of the Ottoman Empire until today, all of us Greeks have been brought up fearing the Turks. The Turkish invasion and their ongoing occupation of Cyprus, as well as repeated provocations in the Aegean, keep reminding us that Turkey’s expansionist policy remains unaltered. Nevertheless, we too are impervious to history. We don’t seem to realise that Turkey’s greatest weapon against us is discord between Greeks, as well as Christians in general.

During the Ottoman period, the Turks used clerics for tax collecting. They were aware of the close ties between the people and the church. They had no qualms about hanging them in plain view in order to belittle, terrify and scorn the Greeks.

I have the great honour of being acquainted with Ecumenical Patriarch Bartholomew. I have worked with experts of international acclaim toward promoting the work of ‘The Green Patriarch’, to try and offset the oppression suffered by Christians in Constantinople and the insufferably hostile, divisive attitude of the Turks against non-Muslim minorities.

A strategy focused on the protection of the environment was cleverly designed in a way that enabled the Patriarch to demonstrate that yes, although Constantinople was conquered by the Turks, the Phanar is here, in operation.

Soon thereafter, I located stolen treasures that belonged to Mount Athos and to the jurisdiction of the Ecumenical Patriarchate. That was the first time I was given the opportunity to collaborate with Elpidophoros. As early as back then, I saw the nobility of his soul, his assertiveness. But above all, I saw his low profile, something that has helped him achieve a great many things behind the scenes.

Each time that Cyprus was in the throes of adversity, the Greeks of Turkey paid the price. In the 1955 September pogrom, the Turkish mob attacked and pillaged Greek property, pillaging churches and raping Greek women. Nobody has asked the president of the Republic of Cyprus to apologise for the sufferings of the Greeks in Constantinople.

Consecrated church items in Turkey have either been destroyed or stolen and sold to international art traffickers. I have worked with Elpidophoros when he served as secretary of the Holy Synod, and was pleasantly surprised to observe the aristocratic manner of the Greeks of Turkey. At the same time, I was taken aback by how little of their great work is known to the rest of the Greeks; how the oppression, persecution and deprivation they suffer on account of the Turks goes largely unnoticed.

Elpidophoros went on to become Metropolitan of Bursa. You must not think that the Phanar (Fener) is a palatial edifice like the archbishopric and the bishoprics of Cyprus. When one converses with Ecumenical Patriarch Bartholomew, who can speak six languages, one becomes aware of his high religious and moral standing. He is a profoundly educated man, like Elpidophoros, but they live in fear of the Turks, in conditions of continuous oppression.

Soon after Elpidophoros rose to the rank of Metropolitan of Bursa, he became cognisant of Turkish plans to convert a church into a nightclub. He mobilised to collect money to avert such action. I suggested that he write a letter to the wealthy Church of Cyprus, headed by the current Archbishop Chrysostomos, in request of financial aid.

Instead of aid, Elpidophoros was endowed with the refusal of the Church of Cyprus. I was embarrassed as I was the one who had suggested that he appeal to his Cypriot brothers. A monk gave Elpidophoros the necessary money and so the church escaped ruin. Elpidophoros went on to restore it, humbly and discreetly, as befits a proper cleric.

Government has given green light for Spehar’s replacement – reports