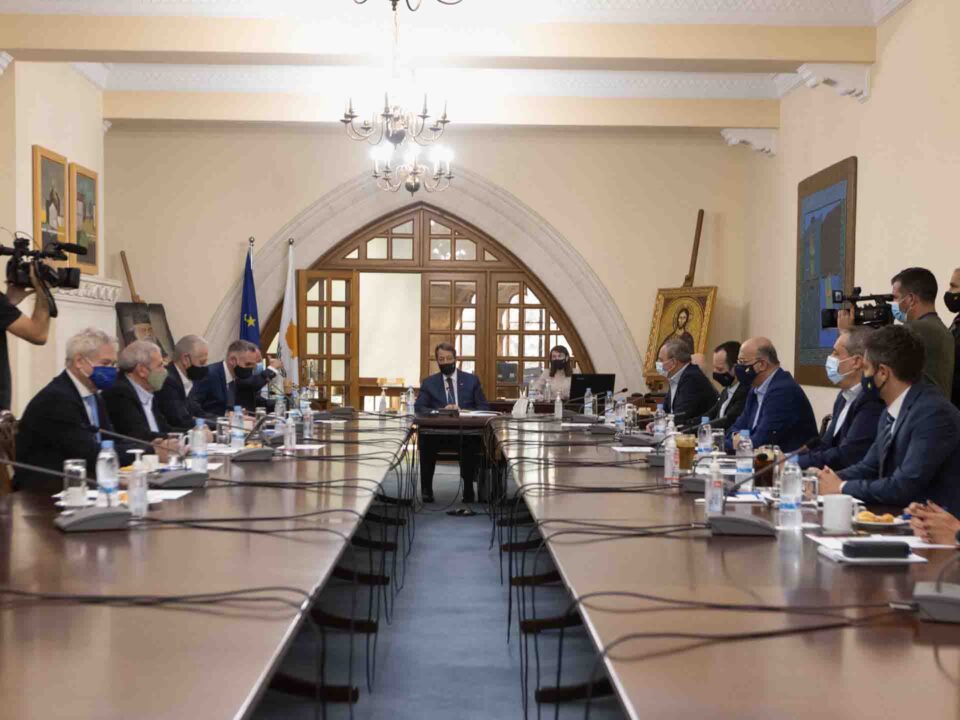 The president and the government expect the UN Secretary-General to appoint a special envoy who will assist in efforts for the resumption of the negotiations process, spokesman Marios Pelekanos said on Monday.

Following a meeting of the National Council, Pelekanos said President Nicos Anastasiades had briefed the party leaders in more detail on his contacts in New York last month with UN chief Antonio Guterres and on the joint meeting the latter had with the two leaders.

He said the various political parties at Monday’s meeting had taken a stand on various issues and an exchange of views had taken place.
“The President and the government expect that the UN Secretary-General to proceed with the implementation of what has been agreed during the informal lunch,” Pelekanos said, referring to the appointment of a new envoy.

“It is the UN Secretary-General himself who has asked the leaders of the two communities to submit proposals and ideas in order to remove the impasse,” he added.

“All the efforts made by our side move within this framework, without deviating in any way from what is provided for in the summit agreements and the resolutions of the UN Security Council. It’s the other side that is submitting proposals that are far removed from what the Security Council resolutions provide.”

In comments following the National Council meeting, main opposition Akel leader Stefanos Stefanou said that from the briefing it was obvious that the Turkish side’s intransigence had grown.

“It has always been our position that in view of this heightened intransigence but also due to the provocations of Turkey, we should consistently insist on what the UN Secretary-General has been saying for four whole years about the resumption of negotiations from the point at which they were suspended in Crans-Montana,” he said.

If the Greek Cypriot side holds fast to this position, it will encourage the UN Secretary-general to re-promote this stance and the Turkish side will be called to take the position of the Secretary-General.

“The strength of this position lies in the fact that it is a position of the UN Secretary-General,” he added.

At the same time, when asked about the government’s position, Stefanou said that “new ideas” the president has from time to time put forward, clash with a unified position on the resumption of talks from where they left off in Crans-Montana.

“So what exactly is the position of the government?” he said. “This should be addressed to them.”

Diko leader, Nicolas Papadopoulos said that accepting the position of equal sovereignty with he Turkish Cypriots would mean the end of the efforts to resolve the Cyprus issue.

“Unfortunately, it is clear that Turkish intransigence and the demand for recognition of equal sovereign status of the pseudo-state with the Republic of Cyprus prevents the resumption of negotiations”.

“This absurd demand has even led to a torpedoing of the UN Secretary-General’s idea of ​​appointing a special envoy to start contacts between the two communities,” he added.

He said that “for a very long time”, Diko has been insisting that the Greek Cypriot side not enter into the process that Turkey is trying to shape.

“We believe that costs must be incurred for Turkey so that the message is passed that the non-settlement of the Cyprus issue has some concrete consequences,” he concluded.

Edek leader Marinos Sizopoulos said he believes the president and his associates should be very careful in how they will manage the issues, given that “unfortunately the attitude of the Secretary-General is not absolutely clear”.

“In many instances, it seems to be in a state of flux and in too many cases appears to facilitate the Turkish side,” he added.

Green leader Charalambos Theopemptou said new ways must be found to bring Turkey back to the negotiating table.

“We have to secure the support of foreign countries and that is the only way,” he said.

“We need to take serious measures, to use all the means at our disposal to achieve the return of the Turkish side back to the negotiating table. This delay goes against us.”

Young mother was burned to death after collision, autopsy shows