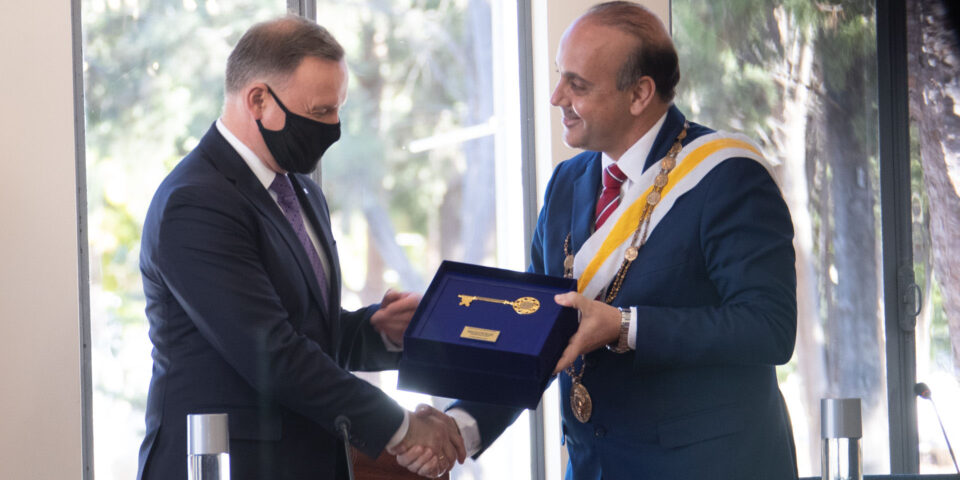 Polish President Andrzej Duda was on Friday given the golden key to the city of Paphos by Mayor Phedonas Phedonos.

Paphos was the last stop made by the Polish leader during his official visit to Cyprus.

Handing the city’s golden key to the Polish head of state, Phedonos said the visit to Paphos constituted “an exceptional honour” acknowledged both by the municipality as well as by Paphos residents.

Addressing Duda, Phedonos said the visit sent a message of support to the Polish archaeological missions which for 56 years have been carrying out excavations in ancient Paphos.

Receiving the key, Duda said he considered the gesture as a sign of love on behalf of the citizens of Paphos towards the Poles, especially those residing in Cyprus.

Noting that he hails from Krakow, which by European standards constitutes an ancient city, Duda described Paphos as “one of the cradles of European civilisation.”

He also referred to the Polish archaeological mission, with continued presence in Paphos since 1965, noting that he was very happy that Polish archaeologists contribute “to unearthing antiquities which constitute the foundation of European civilisation.”

While visiting Paphos, Duda toured the famous mosaic floors and the city’s Ancient Agora where a Polish archaeological mission carries out excavations

Earlier on Friday, Duda met House President Annita Demetriou. According to a statement issued by the House following the meeting, Demetriou expressed her appreciation for Poland’s long-standing principled stance on the Cyprus problem.

Duda, on his part, reaffirmed Poland’s firm position on the issue, underlining his country’s commitment to make sure Turkey respects international laws and ends provocations in the Eastern Mediterranean region.

The Polish President’s statements echoed the ones he made on Thursday after meeting President Nicos Anastasiades and said Cyprus can count on Poland’s support when it comes to the island’s political problem.

On arrival in Cyprus, Duda laid a wreath at the statue of Archbishop Makarios III.

More than 100 killed and wounded in mosque blast in Afghanistan