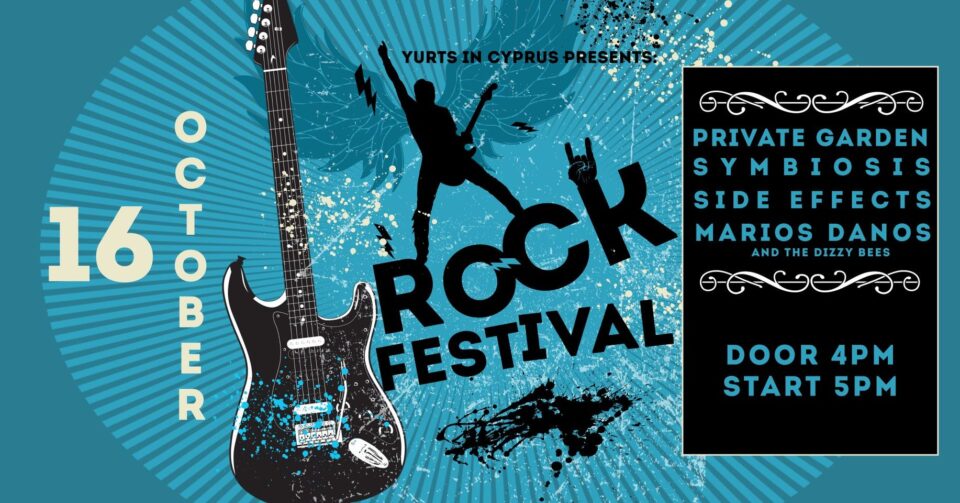 Calling all rock music lovers! The unique Paphos venue with its famous Mongolian tents, The Yurts in Cyprus, is organising a rock festival this month. On Saturday four bands will pump up the mood in Simou valley playing pure rock music.

The festival’s gates will open at 4pm with the first band taking the outdoor stage an hour later. Rock trio Private Garden will open the evening’s music with singer/guitarist Nikolas Christodoulou, Max Daniels on bass and Stefanos Meletiou on drums. The band was formed in 2019 and their sound is a blend of garage and grunge rock with dominating heavy riffs, bluesy vocals and beefy drum grooves. Their debut EP titled Mr TV contains four songs and is ready to be released later this year.

Following their act will be Symbiosis, a four-piece rock band that has had a lot of success playing both venues and concerts across the island. There have been many changes to the band members but the one constant has been Jay Georghiades, frontman, guitarist and founder. Joining him on stage are Konstantinos Chekmak, Kiril Todorov and Sergei Sergienkov. Their aim is to play famous and much-loved rock anthems that are instantly recognisable to almost all ages and guarantee to get the crowd going.

“This coupled with high energy while on stage makes them a must-see band,” say organisers. “Their fan base is in the thousands across Cyprus and they have every intention of building on that by doing what they do best!”

Next on the festival’s agenda is the Side Effects band, which performs an eclectic mix of rockabilly and blues-rock with Stefanos Ioannides, Stelios Frangos, Ian Richard Cole and Fidias Ferekides. Born of a desire to spread their infectious love of rock’n’roll with roots, blues and funk-rock influences, Side Effects are working on their first EP – My Guitar Wants to Kill Your Jazz.

The last band to take the stage is Marios Danos & The Dizzy Bees, usually a Power Rock Trio that swings from Blues to Rock and covers songs from past decades they will transform into a four-piece band with a subtle taste of Psychedelia and improvisation which unfolds the textured and atmospheric vibe that defines their sound. This time they have a special treat planned as they will add the sultry melodies of a saxophone to their well-established soundscapes. The band consists of founder Marios Danos, Donn Torres and Dimitris Panayides. This time they will have Marios Papares joining them on stage with his saxophone.

Tickets are on sale on the venue’s website (www.yurtsincyprus.com) and apart from the live music the festival will also include a variety of drinks, light meals and plenty of good vibes. One thing to remember is that all of The Yurts’ events have recently gone plastic-free which means bringing your own water flask or reusable cups.

Rock Fest at The Yurts