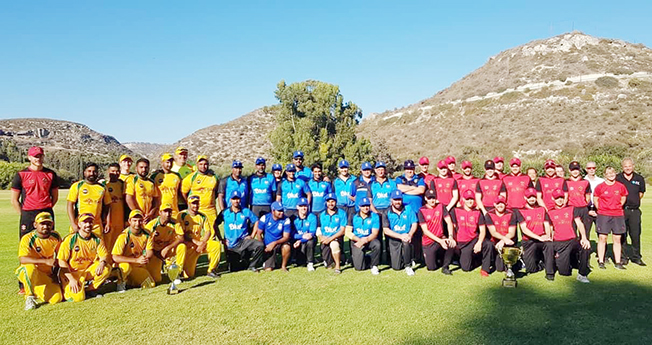 Cyprus, Estonia and Isle of Man (left to right) line up for a group photo at the Happey Valley ground in Episkopi

The first official international Twenty20 cricket matches played in Cyprus proved to be a success for the island and a triumph for the Isle of Man.

Eight matches were played across four days at the Happy Valley ground at Episkopi. The first day saw a two-match series between Cyprus and Estonia, which the hosts won 2-0.

There followed a three-way series between Cyprus, Estonia and the Isle of Man, with each team playing each other twice. The results were conclusive, with Isle of Man winning all four of their games, while Cyprus beat Estonia twice more but lost twice to Isle of Man.

The matches were keenly contested but played in a good spirit under the experienced eyes of umpires Steve Ross and Tom Smith from the UK, Suleman Saeed from Pakistan and Tim Heath from Estonia.

The Cyprus team produced a great recovery in the first match. After limiting Estonia to 102-8, with three wickets apiece for Qasim Anwar and Tejwinder Singh, they slumped to 4-4 before captain Mike Kyriakou steadied the ship with 44 not out, aided by Neeraj Tiwari and Yasir Mehmood, to reach victory in the 19th over with four wickets in hand.

The second match was more comfortable. Although Estonia performed better to reach 130-6, with Yasir claiming three wickets, Cyprus stormed to victory by eight wickets in only 14 overs, led by Gurpartap Singh (54 off 25 balls), ably assisted by Chamal Sadun, Roman Mazumder and Tiwari.
The first match of the tri-series proved a rude awakening for the Cyprus team, as they were bowled out for 92 by a young, fit and hungry Isle of Man team, with the only innings of note coming from Tiwari (33) and Yasir (31*). Isle of Man wasted no time in knocking off the runs inside 12 overs.

After Isle of Man beat Estonia by six wickets, they faced Cyprus again, and this time it was a much closer affair as the home team got into their stride, knocking up 149-7, thanks to scores of 46 by Tiwari and Zeeshan Sarwar.

Although Isle of Man got off to a good start in reply, Cyprus kept plugging away and taking wickets – three each for Gurpartap and Waqar Ali, and at 135-7 there was a real chance of a Cyprus win. But the Manxmen have a deep batting lineup and got home without further loss, with an over to spare.

Undeterred by this setback, Cyprus continued their improvement in the afternoon by amassing 187-8 – the highest score of the week – against Estonia. Mazumder led the way with an excellent 53, with other scores over 20 from Gurpartap, Scott Austin, Tejwinder Singh and Sadun. Waqar’s 4-13 and Tiwari’s 3-28 saw Estonia dismissed for 108 in reply.

Next day the same teams met, and again Cyprus came out on top. Zeeshan’s sweetly struck 61 with good support from Mazumder and Gurpartap saw Cyprus to 160-9, which was enough for a 39-run victory.

The tournament ended with a rampant Isle of Man thrashing a tired Estonia side by eight wickets to seal the trophy. They demonstrated the level to which the home team need to aspire if they are to be successful in international cricket, but nevertheless it was in many ways an impressive effort by Cyprus in their first ever T20 internationals, and coach Richard Cox will have seen some good talent to work with.

Cyprus will now look forward to the T20 World Cup qualifying tournament next year, and will be hoping to arrange some warm-up matches in the period leading up to that event.

Domestically, on Sunday in the 2021 #BAOFINANCIAL T20 Cup, Sri Lanka Lions clinched their place in the semi-finals with a convincing 55-run win over Amdocs, led by Chamal Sadun’s 97 not out, sharing a century partnership with Tharanga Pathirana, and a great performance in the field by Sujith Tennakoon who took a wicket, held a catch and performed two excellent run-outs.

The Lions will need to be at their best when they face Punjab Lions, with the other semi-final being between Cyprus Moufflons and Black Caps.

Investing in Bitcoin: Everything you should know about Bitcoin before buying it!