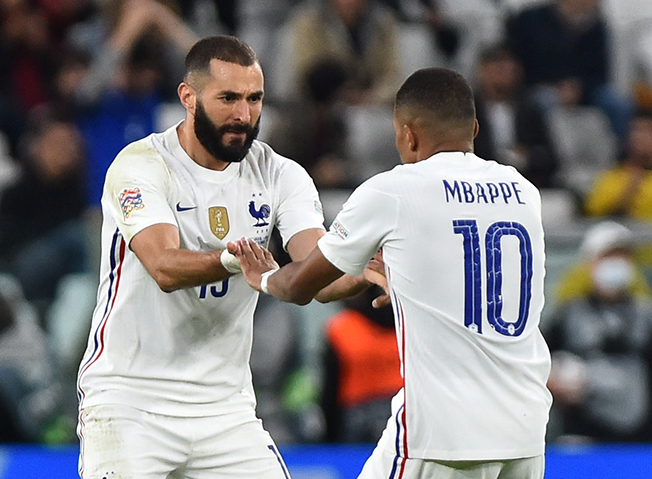 Karim Benzema and Kylian Mbappe both scored against Spain

The Nations League Final Four may only be a bite-sized mini-tournament, but this week’s action still provided a reminder of one of the game’s most enduring truths – it is strikers that win matches.

France beat Spain 2-1 in Sunday’s final at the San Siro stadium with goals coming from two of the finest forwards in the modern game – Karim Benzema, who struck a beautiful shot into the corner and Kylian Mbappe who showed outstanding composure for the winner.

In contrast to the world champions’ clinical finishing, Spain had dominated the opening 45 minutes, enjoying two thirds of the ball possession but, playing without a recognised striker, they barely tested France keeper Hugo Lloris.

With first-choice centre forwards Alvaro Morata and Gerard Moreno missing this week’s games due to injury, Spain coach Luis Enrique had opted against bringing in a ‘pure’ striker.

The absence of a real ‘number nine’ was barely noticed in Wednesday’s 2-1 semi-final win over Italy, where winger Ferran Torres was given a central role and scored both the team’s goals.

But against the French, Torres was moved back to his preferred position on the right of a three-pronged forward line and not only was he less effective in that position, without him Spain lacked a central presence.

Mikel Oyarzabal did most of the work down the middle with Pablo Sarabia coming in from the left wing more in the second half and for the most part, France’s defence coped, despite losing Raphael Varane to injury in the first half.

Oyarzabal did put Spain ahead but after Benzema’s wonderful curling effort to level and Mbappe’s cool finish to put France ahead, Spain’s frantic attacks lacked the presence of a centre forward.

Every time France attacked with Mbappe’s directness, pace and disorientating movement and Benzema’s constant probing for space, there was a sense of anticipation from their supporters.

In contrast, when Spain attacked, it was pleasing on the eye but rarely carried a sense of danger.

There is so much talent in Luis Enrique’s highly promising side and teenagers like Gavi and Yeremi Pino showed here that the production line from LaLiga continues despite the financial problems at the country’s two biggest clubs Real Madrid and Barcelona.

But for Spain to get back to the very top in the international game and regain the World Cup they won in 2010 or the European titles they won in 2008 and 2012, they will surely need to add a top striker to their long list of quality midfielders and wingers.

France though will head to the World Cup in Qatar next November with a frontline that, in itself, makes them one of the favourites.

Mbappe continues to develop as a player, his superb control and lightning pace, combined with a smartness in terms of his ability to exploit spaces and use the ball cleverly when others are in better positions.

Crucially he is now forming a genuine understanding with Benzema in their strike partnership.

Not only are both capable of outstanding individual goals, but they combine with an effectiveness that coach Didier Deschamps would have hoped for when he brought Benzema back into the fold for June’s European Championship.

With the subtle creativity of Antoine Griezmann just behind the pair, France have a front three that is arguably unmatched in the national team arena.

France beat number one ranked Belgium and then Spain without their key central midfielder N’Golo Kante, but with Paul Pogba delivering a fine all-round display in the final.

With the switch to using wing backs in a 3-4-3 formation, Deschamps appears to have found the right formula to get the most out of the talent at his disposal.

Luis Enrique has made real progress in rebuilding Spain after their struggles in the past few years and his side are capable of beating anyone when everything clicks — as they showed against Italy on Wednesday.

But how he must wish he had an Mbappe or a Benzema of his own.