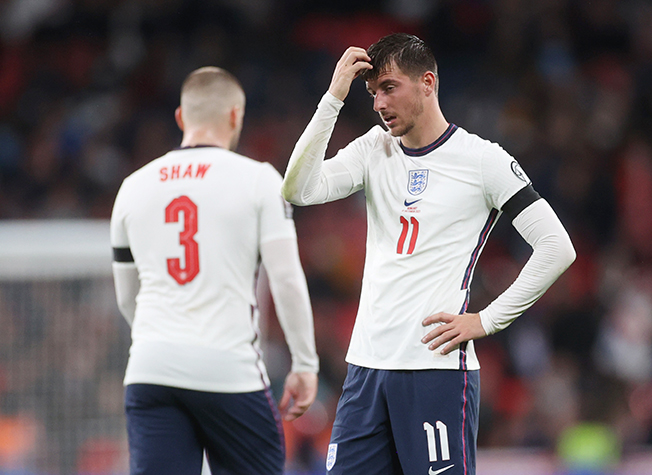 The Three Lions were left frustrated at Wembley

England took another, somewhat faltering, step towards 2022 World Cup qualification when they drew 1-1 with Hungary at Wembley on Tuesday to stay top of Group I with two games remaining.

In a game marred by fighting in the stands between Hungary fans and police, the visitors went ahead with a Roland Sallai penalty after 24 minutes, with England equalising in the 37th through John Stones after a Phil Foden free kick.

England were packed with attacking talent but were unable to impose themselves on a team they beat 4-0 in Budapest last month and created few further chances against the battling Hungarians.

The result leaves England top of the section on 20 points, with the Albania v Poland game still being played.

The Euro 2020 runners-up are still strong favourites to win the group via their remaining games against Albania and San Marino next month, while Hungary, in fourth place on 11 points, need a miracle to snatch second place and a playoff berth.

Denmark reach World Cup with 1-0 win over Austria
Denmark became the second European nation to reach the 2022 World Cup in Qatar with two games to spare after a 1-0 home win over Austria on Tuesday left them top of qualifying Group F with an unassailable lead over their rivals.

After Germany advanced to the 32-nation tournament on Monday, the Danes secured their own berth as a 53rd-minute goal from Joakim Maehle helped them to an eighth successive qualifying victory.

Denmark missed several chances before Maehle beat visiting goalkeeper Daniel Bachmann with a neat finish inside the near post thanks to good work by Thomas Delaney, who set up the wing back after a darting run through the middle.

Denmark and Germany joined Qatar, who gained an automatic spot in the finals as the host nation. Only the group winners from European qualifying advance directly while the runners-up enter the playoffs.

Magic Isak inspires Sweden to 2-0 win over Greece
Alexander Isak won a penalty that was converted by Emil Forsberg before scoring himself as Sweden beat Greece 2-0 on Tuesday to move to the top of World Cup qualifying Group B on 15 points, two ahead of Spain with two games left to play.

Things did not start well for Swedes, who had the assistant referee and the woodwork to thank in the first half as an early goal by Giorgos Masouras was ruled out for offside and he also hit a post while Vangelis Pavlidis headed off the crossbar just before the break.

Isak was felled in the box by Konstantinos Mavropanos and Forsberg rattled the resulting spot kick low to the left for his second penalty in two games.

Isak added the second in the 69th minute, exploiting a hesitant Greek defence to latch onto a long ball by keeper Robin Olsen before rounding the keeper and calmly chipping the ball home.

Greece found themselves down to 10 men in the 86th minute when Pantelis Hatzidiakos was shown a second yellow card, snuffing out any chance they might have had of making a late comeback.

The Swedes are away to Georgia on Nov. 11, while the Spaniards take on Greece in Athens before the two group leaders meet three days later.

How did bitcoin market value crash to $5,400 on a network glitch?