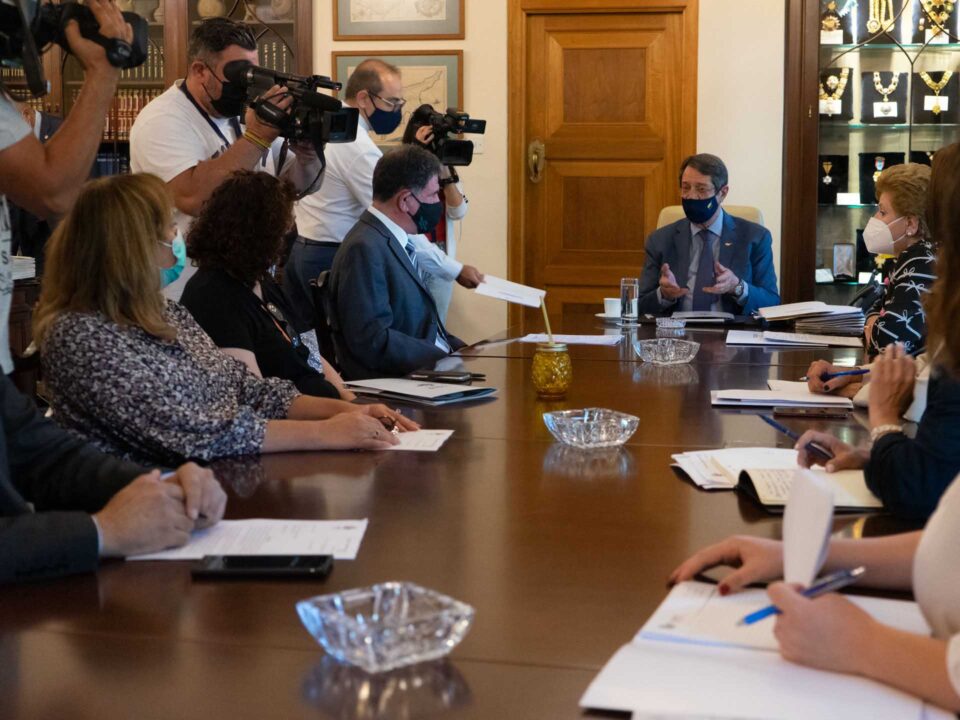 President Nicos Anastasiades on Tuesday said he was determined to resolve the all the problems currently being faced in the operation of public hospitals.

The Presidential Palace on Tuesday was a hub of activity as a wide range key players in the health care system met the president, which resulted in a planned nurses’ strike being called off.

During a meeting with doctors and nurses unions, Anastasiades said the government will take all appropriate measures to make sure public hospitals are competitive and the flagship of the national health system Gesy.

He also dismissed suggestions that state healthcare assets are being privatised – or ever will be – instead praising Gesy as one of the most decisive social reforms ever realised in Cyprus.

State nurses’ union Pasyno meanwhile rolled back their protest – planned for later this week – after meeting Anastasiades, without however ruling out further measures if the government’s promises are not kept.

The previous day, state nurses announced they would be holding a demonstration this coming Thursday during a House health committee session to protest the understaffing of the neonatal intensive care unit at Makarios children’s hospital.

But following the meeting with the president, during which he pledged to see to it that the issue is resolved, the union called the demo off.

The meetings came a day after the president met Health Minister Michalis Hadjipantelas and Okypy representatives to discuss an action plan to tackle the problems currently facing public hospitals.

Pasyno head Panayiotis Georgiou told CyBC following Tuesday’s meeting that nurses’ concerns were met positively by Anastasiades, who assured them that “public hospitals will remain the backbone of Gesy and will under no circumstances be sold or forced to close”.

He also commented on statements by Okypy spokesman Charalambos Charilaou, who said earlier that the state health services had immediately moved some nurses from Nicosia general hospital to the neonatal intensive care unit at Makarios.

“We are hoping for permanent solutions, not just patch-ups,” he said.

Head of Osak Marios Kouloumas was satisfied with the meeting, saying it gave him a chance to communicate the patients’ perspective and concerns on issues they face at public hospitals, also giving him the chance to make suggestions on their behalf.

Last week, he told the Cyprus Mail that Okypy’s inability to resolve these issues was leading the state health facilities “downhill”.

“There is serious inability and disorganisation. It is impossible to respond to the needs of the patients,” Kouloumas said at the time.

He said the union and the president were “in complete agreement” during the meeting, with Anastasiades reiterating the government’s resolve to continue supporting Gesy and working towards solutions that will benefit both the patients and the public “without sacrificing its philosophy or structure”.

He expressed the hope that “once again the intervention of the president will be decisive and drastic, so that public healthcare can finally proceed to autonomy without obstacles and problems,” as a patient-centred system that offers equal access to quality health services while promoting solidarity among the public.

“We are satisfied because the president said outright that just as the government is responsible for implementing Gesy, the government will be the one to solve its issues,” Kouloumas said.

“[Anastasiades] assured us that he has no intention as president, nor does his government, to leave state hospitals in disarray so as to facilitate their privatisation – [a view] expressed by some,” Koumas said.

The nursing personnel of the mental health branch of Pasydy argued that those with mental health issues are treated as second class citizens, noting that the sole care facility for such patients – Athalassa – is in a “tragic” state currently at 140 per cent capacity.

They also cited a Eurostat report which found that Cyprus is second from last in the EU as regards the number of hospital beds available for mental health patients per 100,000 of the population.