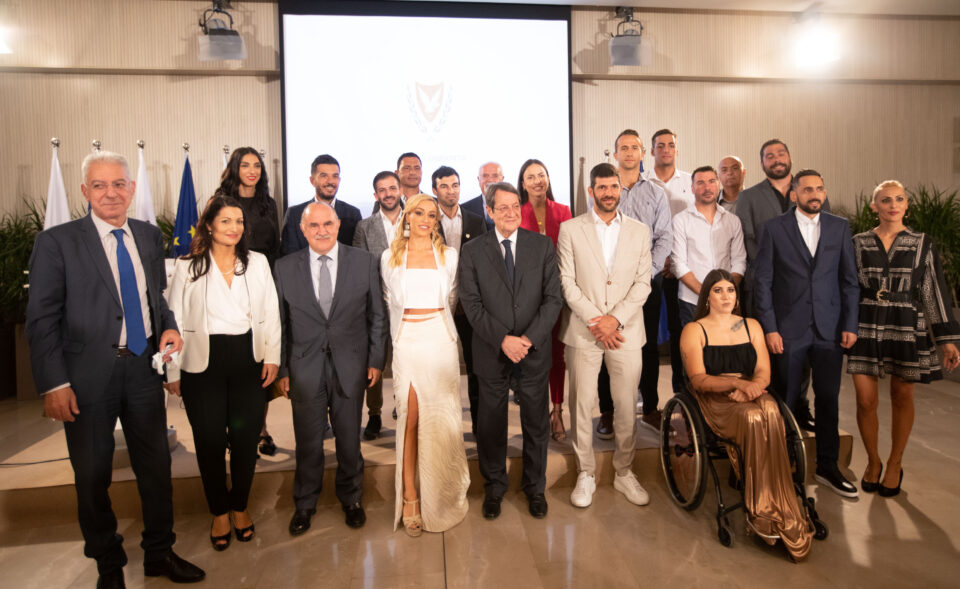 The state honoured the athletes that took part in the Tokyo Olympic and Paralympic Games in a ceremony late on Wednesday.

The event took place at the Presidential Palace in the presence of sports dignitaries and other officials as well as relatives of the Cyprus team, with President of the Republic Nicos Anastasiades assuring that the government will continue to support, upgrade and develop sports on the island.

He also underlined the government’s dedication and consistency in implementing the plans towards this goal.

Addressing the athletes, the President said that the two Olympic medals, distinctions, honorary positions as well as participation in this top athletic gathering, “rank you among the global elite in your field and your success is considered a success for the whole country”.

The President referred to the actions the government is undertaking to promote sports, including the drafting of a National Sports Strategy, adopting a plan for the Professional Rehabilitation of High-Performance Athletes as well as grants to athletes, their associations and sports’ academies as well as other actions. Since 2018, he added, many projects have been completed and another 62 are under implementation at a cost of €50 million.

Acknowledging the blow suffered by athletes and sports clubs as a result of the Covid-19 pandemic, “we have made it a priority to support them, always to the extent possible”. In addition, €300,000 were granted to the athletes who participated in the Summer Olympics for better and more effective preparation.

The President of the Republic further assured that “our primary concern remains the creation of a sports’ framework that will be in line with modern social demands and provide athletes and their coaches the opportunities to do their utmost to exploit their abilities”.

On behalf of the athletes who took part in the Tokyo Olympic Games, the Cypriot Olympic champion sailor, Pavlos Kontidis, said that “the race continues, it is a daily thing. Paris is only three years away,” he noted, and thanked for the financial support from the state, pointing out that it is necessary for all athletes.

Paralympic gold medalist Karolina Pelendritou said the state’s support is absolutely necessary for the athletes if they are to excel in the biggest sporting events. The Paris Games, she added, are not far and wished all athletes to give Cyprus even greater victories.

Cyprus Sports Organisation President, Andreas Michaelides, in his remarks, said the Cypriot athletes who took part in the Olympics are models of excellence for the younger generation. He also pledged the organisation will continue to support them.

NBA star Irving ‘being true’ to himself by not getting vaccinated