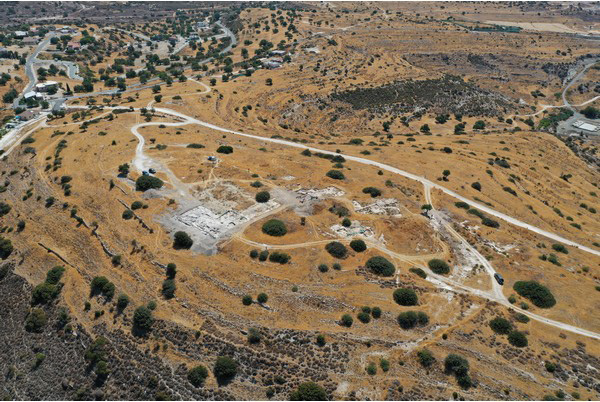 A workshop complex at the Middle Bronze Age settlement at Laonin tou Porakou on a high plateau on the eastern Kouris riverbank held a pivotal role and a peculiar ideological significance for the Erimi community, the Department of Antiquities said on Friday announcing the completion of the 2021 fieldwork season of the Italian Erimi Archaeological Project.

It said that a team from the University of Siena, directed by Professor Luca Bombardieri, had excavated four relevant coeval contexts different in use and function, aiming to clarify aspects of the ideology and social development of the prehistoric community.

The workshop complex on the top of the hill was mainly intended for the production of dyed textiles. By extending the investigated area towards the northern wing of the complex a series of three new roofed units were fully excavated. The location of these units in the northernmost extension of the atelier, facing the valley cliff, is a strong indication of the coherent design of the complex, which now appears to be characterised by a central working open courtyard enclosed by three series of parallel closed building rooms to the North, West and South, it said.

To the West, a unit appears directly open to the North through a small entrance into a massive wall and may be connected to a possible path running from the Kouris river to the workshop complex.

A complete small installation devoted to the processing and food preparation was found in the adjacent unit to the West. The installation is equipped with two spaces separated by vertical limestone slabs where a mortar, a grinding stone and a clay mealing bin were located. Both these units were opened to the South to a large open courtyard.

The department said the compound functioned as a small workshop shrine with ritual function, presumably connected with the productive activity and its ideological implications. In this view, the presence of a small kitchen installation could be interpreted as a space for food preparation specifically connected with the ritual performances that may have taken place in the workshop shrine.

Excavations in the residential quarter revealed a long-term use and transformation of the settlement layout, with a domestic space. The stratigraphic sequence within the room revealed that the unit was severely destroyed by fire. The collapsed materials pertaining to the walls and roof structures sealed an extremely rich assemblage of ceramic containers, including nine pithoi and 40 small and medium-sized vessels with a large repertoire of cooking pots and fine table ware types. Additional materials recovered in the collapse filling are terracotta spindle-whorls and groundstone tools.

Given the unusual number of objects deposited on the floor, it seems likely that this room may had been deliberately filled with objects originally not used in this room before being destroyed by fire. Such an action can be paralleled to the already observed ritual destruction carried out in the workshop complex before the abandonment of the settlement at the latest stage of Middle Bronze Age period.