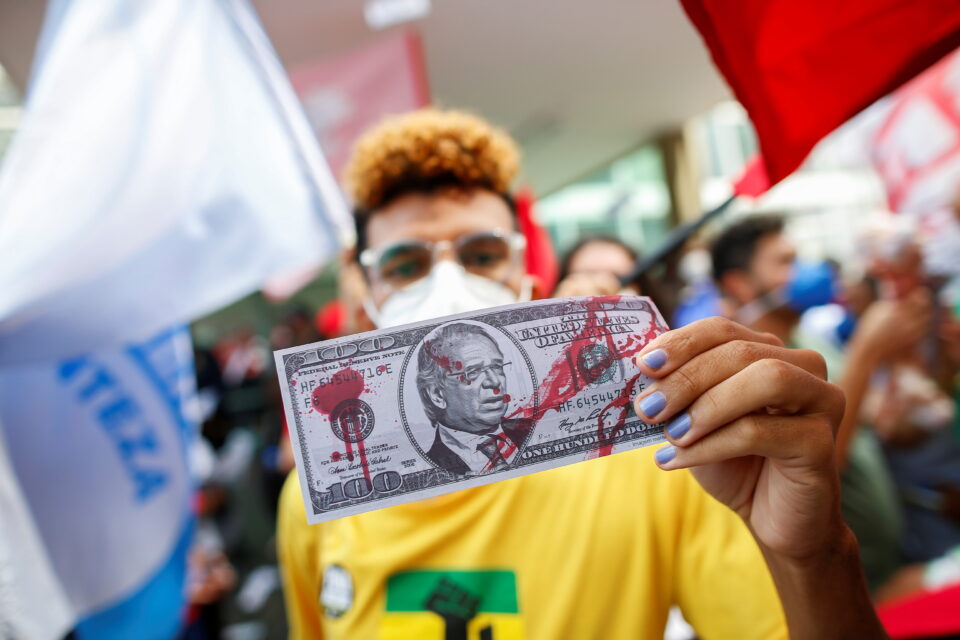 Protest in Brazil against government ministers' link to the Pandora Papers, one of many demonstrations against leaders worldwide

The “Pandora Papers” are a cooperative international project of a large group of journalists, which aims at promoting economic transparency, particularly amongst those who have a leading role in the political arena. The issue of transparency is a multidimensional problem and is not open to an oversimplified, one-dimensional analysis.

What constitutes a moral or immoral transaction is not an issue on which there is universal agreement. I suspect that in Europe most people would consider drug trafficking, human trafficking and blackmail to be immoral acts but would consider it legitimate to protect the confidentiality of business transactions. Because the dividing line between moral and immoral transactions is shifting over time, depending on the prevailing social perceptions, one of the goals of the Pandora Papers campaign is to clearly delineate the line between morally acceptable and immoral acts, so that the fight against immorality can become more focused and effective.

A related issue is the problem of money laundering. Obviously, we cannot talk about money laundering, without having a clear understanding of where the dividing line between clean and dirty money lies.

One of the activities that is being targeted by the Pandora Papers is the provision of financial or other incentives to people in power to secure, in return, a privileged treatment. This is the well-known “ladoma” (Greek for oiling the wheels), which can range from literally a bottle of oil to many millions of euros.

Some 50 years ago, pressure started to be exerted in the direction of eliminating or at least containing these practices. What is certain is that they have not been eliminated. One of the goals of the Pandora Papers is to enhance the efforts to combat these practices, which result in the channeling of wealth into the pockets of people, who have managed to get themselves into positions of power.

Then, there is the distinction between tax evasion and tax avoidance. Tax evasion is a criminally punishable offence. Tax avoidance, i.e. the structuring of the taxpayer’s economic affairs in a manner that legally minimises the incidence of taxation, is a fundamental right of the taxpayer. One of the goals of the Pandora Papers is to eliminate the loopholes found in tax legislation, sometimes as a result of intentionally planting them to facilitate special deals, to generate business for the tax consultants who are active in this field or out of sheer incompetence on the part of the legislators.

End of the offshore company

In May 1988, the Bank of Cyprus published a booklet titled “The Cyprus Offshore Company”. I was the editor of that publication. The event sprang to my mind because in those days the promotion of the concept of an offshore operation, attracting tax between 0 and 4.25 per cent, was a legitimate and respected proposition. In fact, the suggestion of Cyprus differentiating itself from the 0 per cent tax havens, by offering a low (rather than a zero) tax rate came from the Netherlands. Since then, a lot of water has passed under the bridge.

In the past few months, the Organisation for Economic Cooperation and Development (OECD) coordinated the attainment of an international agreement amongst 136 countries, which anticipates the introduction of a minimum tax rate of 15 per cent. The countries include all the member states of the European Union and the 20 economically larger countries of the world (G20). The new US government orchestrated this initiative. Very few countries have not (as yet) acceded to the agreement, Pakistan, Sri Lanka, Nigeria and Kenya. It should be mentioned, however, that these new rules primarily concern the large multinational companies, which have an annual turnover of over €20 billion and a profit margin in excess of 10 per cent. The detailed drafting of the relevant rules and their approval is expected to be completed by the end of October, with the aim of implementing the rules as from January 1, 2023. One of the goals of the Pandora Papers is to pave the road for the aforementioned tax reforms.

The Pandora Papers and Cyprus

The Pandora Papers are not focused on Cyprus or any of the leading Cypriot politicians. Nevertheless, given the recent sinful history of Cyprus in the field of collusion and corruption, it was inevitable that some attention would be paid to Cyprus. This is because of our politicians’ persistent refusal to adopt a properly and effectively working system of statements of wealth, which would secure the desired transparency in the financial dealings of the senior members of the executive, the legislative and the judicial arms of the state.

The Pandora Papers very aptly highlight the fact that the people who have the power to combat corruption and collusion are, in fact, those who derive benefits from perpetuating these practices. They are the people who are involved in these practices. They are the people who insidiously and infernally fight against any attempt to clearly differentiate the immoral, the impermissible, the criminally punishable acts from the acceptable acts, while, at the same time, they proclaim their pretentious determination to stamp out corruption and collusion.

This is the play that we have been watching in Cyprus over the past 17 years, ever since the “pothen esches” law was first enacted. As the journalists involved in the Pandora Papers point out, the people in power abhor transparency. They are very comfortable with the prevailing confusion and uncertainty as to what constitutes an “indecent” act. They are very keen to distinguish between merely “politically unacceptable behaviour” and a “criminally punishable act”, because they thus manage to get away even if they are caught red handed. They all vocally proclaim their opposition to the criminalisation of politics.

In Cyprus, we have witnessed many such cases in the recent past. These are the social attitudes that hundreds of honest journalists have set out to combat with their involvement in the Pandora Papers. Three cheers for them.

Admittedly, I have observed that, following the pressure exerted, some limited progress has been attained in shifting the positions of our politicians on the issue of the “pothen esches” in the correct direction. However, serious issues remain which if not resolved will lead again to the total failure of the system.

The journalists involved in the Pandora Papers gathered some 12 million (yes, 12 million) documents, spreadsheets, images etc. in order to highlight the problem of corruption and collusion amongst the politically exposed persons. This is the gist of the Pandora Papers. Past history and the punishment of those who have utilised their positions to illegally enrich themselves is an issue, but of secondary importance. The first and foremost goal is to design and activate the necessary tools, such as “pothen esches”, to stop the decay from now on. This is the message which the Pandora Papers are seeking to transmit.