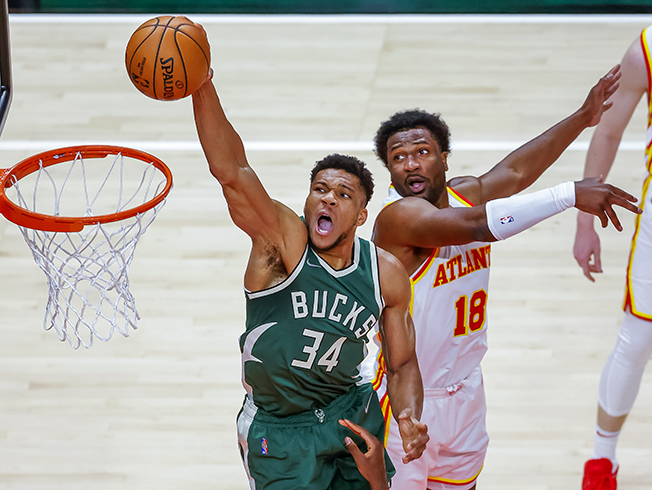 The Bucks went on to dominate overtime, survive Durant’s dominance and beat the Brooklyn Nets. A little over a month later, Giannis Antetokounmpo helped them celebrate their first NBA title in 50 years.

Antetokounmpo and the Bucks receive their championship rings and raise their title banner, all while turning the page to begin their defense of the championship when they host Durant and the Nets on Tuesday night in the first game of the NBA season.

Milwaukee’s roster from its six-game victory over the Phoenix Suns in the NBA Finals remains mostly unchanged.

The Bucks’ only loss in free agency from their primary playoff rotation is P.J. Tucker, who signed with the Miami Heat. But Milwaukee also gets a few pieces back from injury, including forward Donte DiVincenzo.

The Bucks are looking to repeat behind their core of Antetokounmpo, Khris Middleton and Jrue Holiday following a spectacular postseason run where they overcame a pair of 2-0 series deficits against Brooklyn and the Suns.

“I’m not satisfied,” Antetokounmpo said. “I’m not even close to being satisfied. That’s the tone we’ve got to set as a team. And as a leader of this team, that’s the tone that I’m going to set. We understand that teams are coming for us, but we’re going to be ready.”

Antetokounmpo averaged 35.2 points and 13.2 rebounds while shooting 61.8 percent from the field in the Finals after missing two games in the Eastern Conference finals with a hyperextended left knee. He was just as dominant against the Nets, averaging 31.9 points and 12.9 rebounds on 57.4 percent shooting, and in Game 7 he delivered a 40-point, 13-rebound performance.

“We continue to say we feel like Giannis has got a lot of room for improvement, which is a lot of respect for how much he already does and how great a player and how impactful he is to winning,” Milwaukee coach Mike Budenholzer said.

Brooklyn is healthier than it was against the Bucks. But the Nets are still shorthanded. Durant averaged 35.4 points in the series, had 48 in Game 7 and a triple-double in Game 5 to extend the series.

He dominated the series when Kyrie Irving missed the final three games due to an ankle injury and James Harden missed three games and was severely limited due to a hamstring injury early in the series opener.

Durant and Harden are available for the season opener but Irving is unable to participate in team activities due to being unvaccinated against COVID-19.

New York City regulations stipulate Irving must be vaccinated to play home games. Although he could play in road games, the Nets decided last week they were unwilling to entertain Irving being a part-time player.

Without Irving, the Nets might attack differently. Harden will play more of an on-ball, point guard role as he did with the Houston Rockets.

Free-agent addition Patty Mills, previously with the San Antonio Spurs, could help fill the production void during Irving’s absence. Primarily off the bench last season, Mills averaged 10.8 points, 2.4 assists and shot 37.5 percent from 3-point range. Head coach Steve Nash also described Jevon Carter, acquired in the Landry Shamet trade from the Phoenix Suns, as a “guy who will play for us.”

The Nets are still among the favorites to win the NBA title thanks to Durant and Harden, who gave Brooklyn fans glimpses of their star talent during the regular season.

Durant played in only 35 games last season but averaged 26.9 points, and Harden averaged 24.6 points and 10.9 assists in 36 games following his arrival via a January trade with Houston.

“What we have on paper is cool,” Durant said, “but we’ve still got to get out in between the lines and play.”

The Nets refreshed their roster by picking up Mills and Paul Millsap in free agency, and retained Blake Griffin along with Bruce Brown, who will replace Irving in the starting lineup.

“Now we get a full year of togetherness and you can’t beat that,” Harden said. “But we showed glimpses last year without being healthy and being full. This year it’s going to be a different story.”