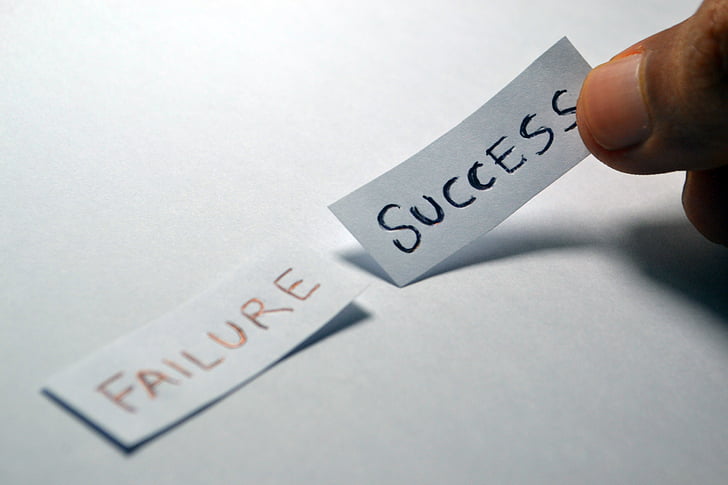 We don’t celebrate failure properly. Someone who has failed is someone who has tried, quite unlike those who sit on the sidelines and criticise. Failure has to do with encouraging and celebrating effort rather than outcome, something that is often lost as we tend to focus only on the “winners” in particular industries, sectors, sports, etc. By focusing on effort, we encourage everyone to get involved to move forward, take a risk, and contribute towards achieving the common goal. In contrast, if we focus on “winners” we glorify success and discourage those who are not confident enough or who don’t want to risk failing.

I refer to “winners” in inverted commas, simply because “winning” is not a singular thing. Being in business means that you are building something, a product or a service or a combination thereof, which also means that your efforts to build, sell, and manage never stop. Furthermore, winning can be defined any way you want it to, e.g. turnover, absolute profit, profit margin, number of employees, etc. For example, using 2020 numbers, Walmart is the largest company in the world by turnover ($559,151m turnover, $13,600m profit), Microsoft is the largest by profit ($168,090m turnover, $61,270m profit), and Apple by market capitalisation ($2.1tr).

When you are building a business, a lot of people will offer you advice, but none will tell you to “make lots of mistakes”. They might say “take risks”, “don’t hold back”, or “I trust your abilities” but they probably won’t be able to support why they say it or indeed be willing to help you achieve your goal. Supporting from the sidelines requires zero effort on their part and of course zero risk of them being associated with a potential failure of your business. Of course, when the business becomes successful, they will be the first to say, “I told you all would be fine” and even try to gain some credit for making a random recommendation. This is similar to the government or bank employee approach to building a career: avoid doing anything because by doing something you risk it failing, so stay in your place and wear your blinkers until you get promoted to the top as a result of never doing anything wrong.

In business, you need to celebrate failure, define success on your own terms, and be prepared to do things on your own. So, let’s talk about mindset; if you are never failing, you are probably never really winning either. If everything you do is working, you probably aren’t taking enough risks, which means that even if you are achieving small wins every day, you aren’t challenging yourself to achieve big wins that will set you apart in a meaningful way. Taking calculated risks is great, but it’s the uncalculated ones and those that go beyond what is obvious that will move you forward.

When someone on your team fails, talk about it and even celebrate it. It’s much easier to talk about failure in hypothetical terms than it is to actually embrace it, but highlighting these moments when they happen helps ensure this mindset becomes an active part of the culture you are building. That means creating a space where it’s okay to publicly share what went wrong, and what the team can learn from that failure for next time. That’s why failure is a good thing – someone tried something, it didn’t work out, and now you are all wiser from it.

Which brings us to WiRE: What is our goal? To bring transparency to the real estate market. What does that mean? To collate all the information and data that relate to every single property on the planet, make it accessible to everyone for free, and thus help people make better decisions about their homes. Isn’t that too grandiose? Yeap. That’s why is worth it.

According to all known laws of aviation, there is no way that a bee should be able to fly. Its wings are too small to get its fat little body off the ground. The bee, of course, flies anyway. Because bees don’t care what humans think is impossible (from the Bee Movie).