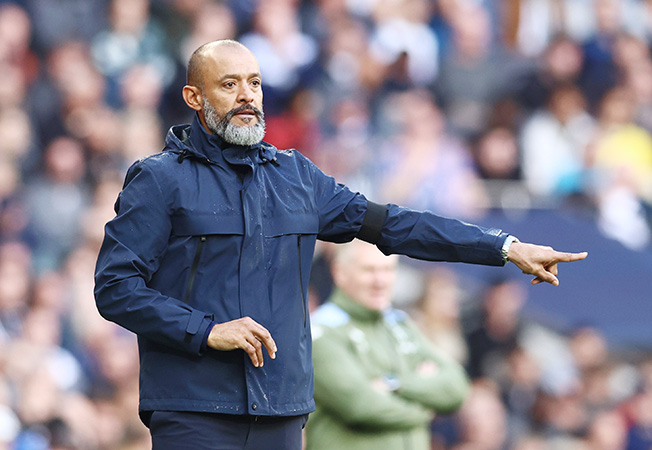 Tottenham boss Nuno Espirito Santo does not think it is a risk to leave his big guns at home for the Europa Conference League trip to Vitesse Arnhem.

Nuno has confirmed that none of the outfield players who started last weekend’s 3-2 win at Newcastle will travel to Holland for Thursday night’s game, instead staying in London to train with Sunday’s trip to West Ham in mind.

It is a tactic Nuno has used before for the qualifying game with Pacos de Ferreira, where, although they lost 1-0 on the night, they won the following Premier League game against Wolves.

Nuno says he has weighed up all of his options and thinks this is the best course of action.

Asked if it was a risk, he said: “No. It’s not about that. If someone gets that interpretation, I cannot do anything.

“So it’s about trying to analyse and see what is better for us in terms of our process during the week and for the future.

“Next week we are going to have another game midweek. So we have to measure all these things. But what you are trying to say, if you allow me, is not right.

“We respect all the competitions, we respect all the games. And we consider that it’s better for us to start the players that are going to start, leave some players here, work, recover well, so we can be able to compete better on the Sunday, and then we have Wednesday, and over and over again.

“But I repeat myself with the way I started, if you think about risk, you’ll not decide.”

One of those players who will be starting is Steven Bergwijn, who has returned from a six-game injury absence.

The Holland international started the season well and Nuno says he is an important part of his plans.

“Stevie started the season very, very well. Very, very well,” Nuno said. “Unfortunately he got injured in the national team and since then he’s struggled again.

“He has things that can really help us. He’s fantastic in one v one, offensive, he’s fast, he gives us speed. We need Stevie. I repeat myself: we need Stevie.”

The winger is in his second full season in England and he admits people are yet to see the best of him.

“I know I have more in house, but I started this season positively and well,” Bergwijn said.

“Last season was difficult for me, but this season started positively and then I got the injury but I kept the confidence from the staff here and you will see the best of me soon.”

Bergwijn, who left PSV Eindhoven in 2020, has an insight into Thursday’s opponents.

He added: “When I played in Holland, Vitesse were always difficult to play, especially at their stadium.

“They like to play football and they always have good players. It’s not going to be an easy game but we are Tottenham so we need to win and I think we have enough quality.”