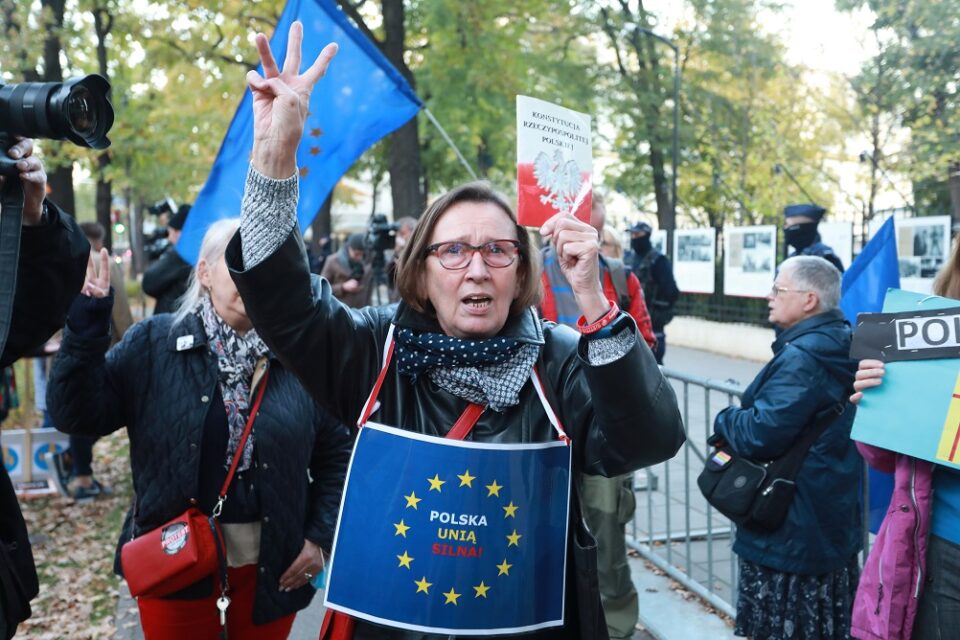 People demonstrate in front of the Constitutional Tribunal building in Warsaw

The spat between the European Union (EU) and Poland concerns every member state and every citizen of the EU except the union’s Turkish Cypriot citizens in northern Cyprus where the writ of the EU does not run.

The principle involved is the primacy of the EU legal order – the acquis – in member states. According to the EU, it is the gel that holds the union together; in other words primacy over the laws and constitutions of member states is necessary for the union to exist – it is an existential principle no less!

The problem is that not all the principles of the acquis were conferred on the EU by treaty law. It was the European Court of Justice (ECJ) that decided very early in the life of the European Community (EC) in the 1960s – EU after the Treaty on European Union 1992 (TEU) – that the acquis has primacy whether or not it was conferred by the EC treaties.

Under the TEU the principles that govern the distribution of powers between the EU and its member states are those of conferral, subsidiarity and proportionality but let’s park the last two as they are not relevant to the EU-Poland spat.

The EU contends that the treaties task the ECJ (now called the Court of Justice of the European Union) with the duty of ensuring that the law is observed in the interpretation and application of the treaties. According to the EU this means that it is the ECJ that is the final arbiter of the meaning and effect of the treaties including issues of EU competence.

The ECJ has always been an unashamedly political court. Therein lies the problem because Poland and Hungary argue that the primacy of EU law in areas outside the EU’s competence cannot trump the constitutions of democratically elected sovereign states.

There is a genuine legal problem here except that under the law of treaties Poland and Hungary have no leg to stand on as they must have known when they acceded to the treaties that the EU legal order as interpreted by the ECJ has primacy.

The understanding of the government of Cyprus that joined at the same time as Poland and Hungary in 2004 was that the primacy of EU law was a condition of membership and amended Cyprus’ constitution accordingly.

The amendments make the constitution expressly subservient to measures taken by the government of Cyprus as a result of its obligations under EU law. Moreover, the constitution cannot prevent measures emanating from the EU having legal effect in Cyprus and no laws may be passed by the legislature repugnant to the EU legal order.

It is true that Cyprus was not much enamoured of her constitution and was more than happy to give the acquis primacy over it, but it is also true that the primacy of the acquis was a requirement of accession – though the way it was incorporated into national laws was for the constitutional arrangements in member states. Thus when the UK joined in 1973, it passed a constitutional statute – repealed after Brexit – that made provision giving EU law primacy in UK law.

The arguments are obtuse but a brief excursion into how the problem arose sheds a flood of light on why primacy is of existential significance in the EU.

The ball was set rolling when the Supreme Court of Ireland sought a ruling from the ECJ on what to do about an alleged lack of judicial independence in Poland on account of changes made by the government in Poland in 2017.

The facts were simple but important. Poland had sought the extradition from Ireland of an alleged drugs dealer under the European Arrest Warrant (EAW) issued by Poland that enables member states to seek the surrender of alleged criminals quickly and efficiently.

Easy extradition between member states, however, is based on shared values and mutual trust that the system of justice in all member states guarantees a fair trial by an independent and impartial tribunal that respects the rule of law and basic human rights.

According to the Irish court, ‘the wide and unchecked system of justice’ in Poland was inconsistent with the rule of law and respect for the right to a fair trial by an independent tribunal.

The ECJ advised the Irish court that where there is a real risk of a breach of the right to a fair trial on account of systemic deficiencies in the independence of a member state’s judiciary the court of a requested state must determine specifically and precisely whether there are substantial grounds to believe the accused will not get a fair trial if surrendered and refuse extradition where unfairness is proved.

The case shows that the EU was fully justified in raising concerns about the independence of the judiciary in Poland and why it is necessary for the ECJ to be the final arbiter of issues such as the rule of law that affect all member states of the EU.

Right on cue, Poland’s constitutional tribunal has now come full circle with its decision that the Polish constitution has primacy over EU law, which drives a coach and horses through the founding principles on which the EU is founded. As in football so also in the European club: you can’t move the goalposts.