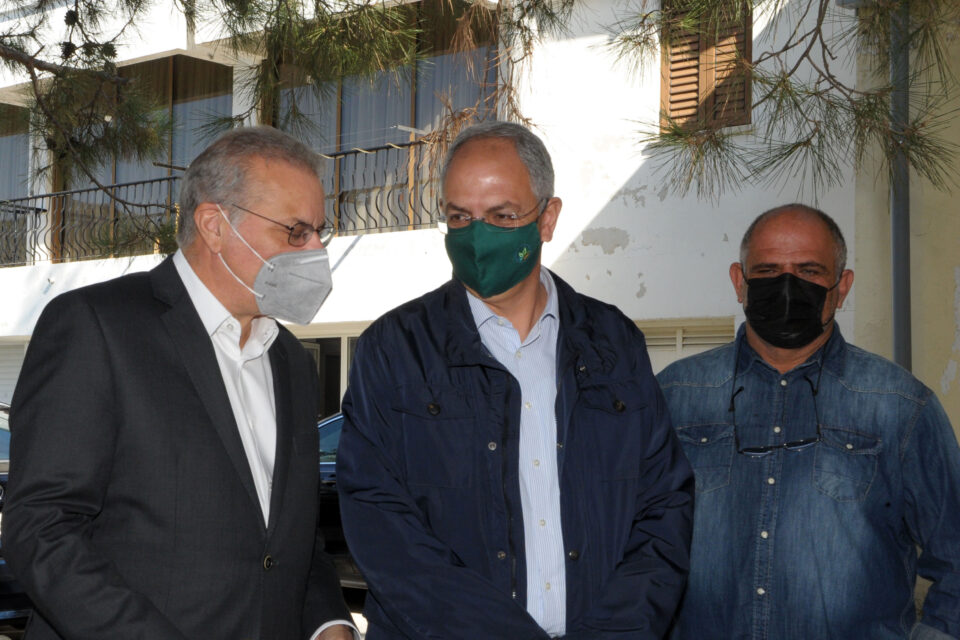 The two ministers in Vavatsinia

Agriculture Minister Costas Kadis and Interior Minister Nicos Nouris on Tuesday met the community leaders of mountainous areas in Limassol and Larnaca that were devastated by fires in July.

The meeting was held to bring the ministers up to speed with the progress of the measures announced by the state in the aftermath of the fires, which killed four men and destroyed some 55 square kilometres of forest, crops, homes, and other property across a number of communities.

“I believe that our dialogue with the community leaders clearly showed that the government acted quickly and effectively,” Kadis said.

He added that the agriculture ministry helped to immediately restore water supply to the affected areas, and offered grants so professional farmers could return to work as soon as possible.

In addition, the ministry is working on three more schemes aiming to help both professional and amateur farmers restore 100 per cent of their damages, he said.

“We also discussed the anti-flooding works that are due to finish in the next few days, as well as anti-landslide works and efforts to restore vegetation between the communities through the planting of 25,000 saplings which will be executed by the forestry department”.

Kadis added that following requests, some measures have been tweaked to include certain farmer categories such as beekeepers, bird breeders and greenhouse owners.

“We will continue to monitor the situation to ensure these measures are implemented fully,” he said.

As regards other sectors that suffered property damage but have not been compensated, Kadis said that it might take some time as grants need to be approved by both the Council of Ministers and the EU.

“Today’s meeting, as one of many that have taken place recently, has proven that we have moved on from the phase of providing emergency help and support to the communities, to a different phase of medium-term planning for the future,” Nouris said.

The interior minister added the fact the latest meeting included discussions about the building of parks and cultural centres and improving school infrastructure is “proof that we have dealt with the problem to a large degree”.

Everyone has received the help they were initially promised from the state, but the meeting was held specifically to hear about any additional issues that may have arisen since then, he said.

“The community leaders gave us a list of issues that the interior ministry will continue to examine, like improvements to housing schemes that will consider the areas disadvantaged because of the catastrophe”.

The ministry will also consider granting some additional aid to those who left the area so that they can return, he added.

Vavatsinia community leader Andreas Gavriel was positive following the meeting, telling reporters that it helped straighten out some of the issues posed by the communities and reassured them that the rest will be looked into.

“Today’s discussion was exceptionally planned by the two ministers, who were ready to answer all our questions,” he said. “We hope they will keep their promises so the area can be rejuvenated and come back to life”.