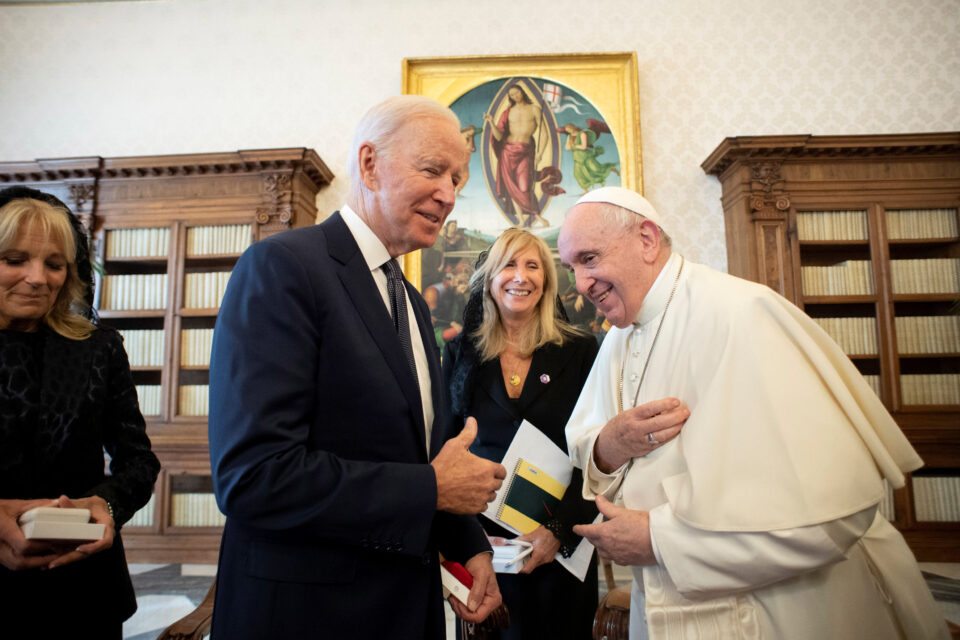 U.S. President Joe Biden held an unusually long meeting with Pope Francis at the Vatican on Friday as a debate raged back home about the Catholic president’s support for abortion rights.

The Vatican said the private meeting lasted one hour and 15 minutes and then about another 15 minutes were spent for picture taking and the exchange of gifts in the presence of other members of the delegation, such as Biden’s wife, Jill.

The meeting with former President Donald Trump in 2017 lasted about 30 minutes and one with Barrack Obama in 2014 lasted about 50 minutes.

Both the White House and Vatican statements made no direct reference to the abortion issue.

The White House said Biden thanked the pope for “his advocacy for the world’s poor and those suffering from hunger, conflict, and persecution”. Biden also praised the pope’s “leadership in fighting the climate crisis, as well as his advocacy to ensure the pandemic ends for everyone through vaccine sharing and an equitable global economic recovery”.

The Vatican said the two discussed “care of the planet”, health care, the pandemic, refugees, migrants, and “the protection of human rights, including freedom of religion and conscience”.

Biden gave the pope a “command coin” sometimes awarded to soldiers and leaders and told him: “You are the most significant warrior for peace I’ve ever met.”

Citing what he said was a tradition linked to the coin, he joked with the pope, saying: “Next time I see you, if you don’t have it, you have to buy the drinks (but) I’m the only Irishman you’ve ever met who’s never had a drink…”

The visit was surrounded by exceptionally tight security because the Italian capital is simultaneously preparing to host the G20 summit of world leaders this weekend.

Swiss Guards in their traditional red, yellow and blue uniforms and holding halberds gave Biden and his wife an honour salute as they and the U.S. delegation arrived in the San Damaso courtyard of the Apostolic Palace. The U.S. flag flew from the central balcony.

The meeting between the first Latin American pope and the second Catholic president in U.S. history took place amid fierce debate in the United States Church, where Biden in under pressure from conservatives over his conflicted position in the dispute over abortion rights.

The president, who goes to weekly Mass regularly and keeps a picture of the pope behind his desk in the Oval Office, has said he is personally opposed to abortion but cannot impose his views as an elected leader.

The U.S. Supreme Court on Monday will hear the first of two major cases this year challenging a series of state laws backed by Biden’s rival Republicans limiting abortion rights. Abortion opponents hope the court will overturn the landmark 1973 Roe vs Wade decision that legalised the procedure nationwide.

Biden’s most ardent critics in the U.S. Church hierarchy have said he should be banned from receiving communion, the central sacrament of the faith, and doubled down ahead of the meeting.

“Dear Pope Francis, you have boldly stated that abortion is ‘murder’. Please challenge President Biden on this critical issue. His persistent support of abortion is an embarrassment for the Church and a scandal to the world,” Bishop Thomas Tobin of Providence, Rhode Island, said in a Tweet.

In June, a divided conference of U.S. Roman Catholic bishops voted to draft a statement on communion that some bishops say should specifically admonish Catholic politicians, including Biden.. They take up the issue again next month.

Asked about the U.S. communion debate last month, the pope told reporters that abortion is “murder”. But he also appeared to criticise U.S. Catholic bishops for dealing with the issue in a political rather than a pastoral way.

“Communion is not a prize for the perfect. … Communion is a gift, the presence of Jesus and his Church,” the pope said, adding that bishops should use “compassion and tenderness” with Catholic politicians who support abortion rights.

Since his election in 2013 as the first Latin American pope, Francis has said that while the Church should oppose abortion, the issue should not become an all-consuming battle in culture wars that detracts attention from matters such as immigration and poverty.

October rainfall only 14 per cent of seasonal levels