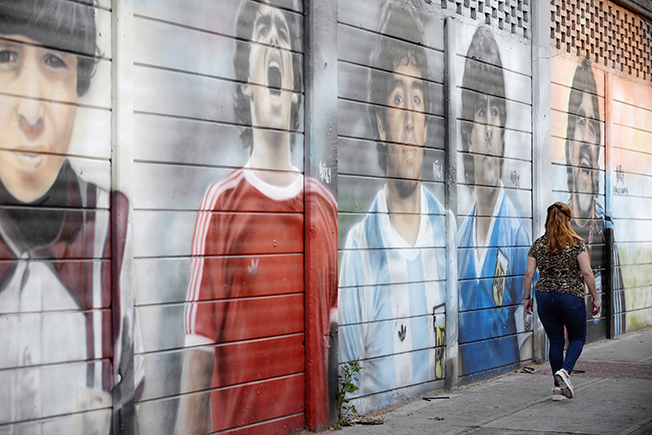 A woman walks in front of murals of the footballer before the premiere of the Amazon Prime Video series ‘Maradona: Sueno Bendito’ (Blessed Dream), in Buenos Aires

A new drama series based on the life of late Argentine footballer Diego Maradona promises to reveal little-known details about the turbulent life and times of the legendary player and has already caused controversy in his homeland.

The series, which was being filmed for Amazon Prime Video when Maradona died https://www.reuters.com/article/soccer-argentina-maradona-death-idINKBN2852JQ of a heart attack in November 2020, tells the story of his rise from humble origins on the outskirts of Buenos Aires to global superstar who battled alcohol and drug addiction.

“Maradona: Blessed Dream” mixes archive footage with dramatised scenes from his life over 10 one-hour episodes. It will premier in Argentina and around the world on Friday.

Four different actors play Maradona at varies stages of his life, and others appear as former players, coaches, agents and family.

“Would he have liked it?” Nicolas Goldschmidt, one of the actors who plays Maradona, said in an interview with Reuters. “I hope with all my heart the answer is yes.”

The famously unpredictable Maradona approved the script before his death, prompting speculation that some of the details will surprise.

It certainly kicks off in dramatic fashion, with a 40-year-old Maradona on a beach, overweight and out of breath. About to be hospitalized after overdosing on cocaine, his business manager Guillermo Coppola tries to hide the event from the world’s media.

But the lows – his battle with drugs and obesity – and the numerous controversies that seemed to follow him wherever he went, are not ignored.

“I think there are a lot of things that are still not known and that we are going to discover because this series deals with private and intimate moments,” said Jean-Pierre Noher, one of the actors who plays Coppola.

The series was filmed in Argentina, Spain, Italy, Uruguay and Mexico and has already stirred debate in his homeland, where Maradona is a folk hero and considered as the greatest footballer of all time.

His former wife Claudia Villafane went to court to get some scenes removed and has said she will wait to see the final cut before deciding whether to take legal action.

Mercedes Moran, who plays his mother in the show, said when people see it that would help dissipate the concerns.

“I think there’s something about Diego, some feeling, some light, something of the best of him,” she said. “That is what we have tried to celebrate with this story.”

Tsitsipas knocked out by Tiafoe in Vienna upset