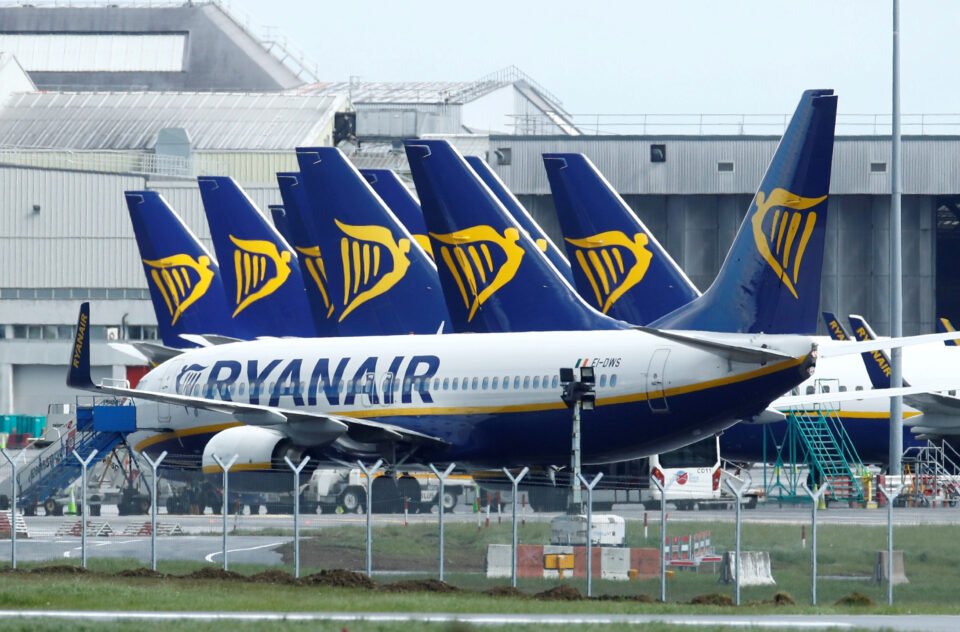 Ryanair (RYA.I) on Monday reported its first quarterly profit since before COVID-19, but downgraded its annual forecast to a loss of up to 200 million euros ($231 million) on plans to sell discounted tickets over the winter and higher fuel costs.

Europe’s largest budget airline, which operated more flights this summer than any European rival, posted a profit of 225 million euros for the three months to the end of September, marking its first quarterly profit since October-December 2019.

But the Dublin-based airline said it expected a loss of between 100 million and 200 million euros for the financial year that ends on March 31.

While that is better than the 815 million euro loss posted in the previous year, it is a downgrade from its July forecast of “somewhere between a small loss and breakeven”.

“There is no doubt that the remainder of the fiscal year will be challenging, the winter will be tough,” Group Chief Executive Michael O’Leary said in a video presentation.

The number of empty seats per plane would shrink from around 20 per cent to under 10per cent by next summer while yields, or fare levels, will return to pre-COVID levels “if not better”, O’Leary said.

The airline expects to return to profitability in the year ending March 2023, he said.

Ryanair shares briefly dropped more than 4per cent to 16.2 euros after what Goodbody stockbrokers described as a “slight miss” and a more cautious outlook statement than expected.

Ryanair carried 39.1 million passengers in the six months ended September, more than double the number in the period last year but 54 per cent fewer than the same months in 2019.

Ryanair said it would fly around 10 million passengers per month over the winter and “just over” 100 million in the year to March.

O’Leary, who has said the pandemic offers the best growth opportunities of his three-decade career, reiterated a forecast that Ryanair would fly 225 million passengers a year by 2026.

Meanwhile, Ryanair (RYA.I), is considering delisting from the London Stock Exchange due to a fall in trading volumes this year after British shareholders’ voting rights were restricted post-Brexit, the Irish airline announced on Monday.

A delisting would be a blow to London which is seeking to bolster its credentials as a global financial centre that can attract and sustain international companies.

Ryanair announced in 2020 that UK nationals, like all other non-EU nationals, would from January 2021 no longer be permitted to acquire ordinary shares.

That decision was taken to ensure the airline remains majority EU-owned and retains full licensing and flight rights in the bloc now that Britain has left the European Union.

Ryanair has a primary listing on Euronext (ENX.PA) Dublin and its American Depository Receipts (ADRs) are listed on the US Nasdaq (NDAQ.O). In 2012 it downgraded its listing on the London Stock Exchange from a premium listing to a standard listing.

“The Board of Ryanair is now considering the merits of retaining the standard listing on the LSE,” the airline said in a statement on the release of its financial results for the six months to the end of September.

“The migration away from the LSE is consistent with a general trend for trading in shares of EU corporates post Brexit,” the statement said.

Britain is pushing to boost the City of London as a global financial centre in the aftermath of Brexit, which has largely cut off the UK financial sector from clients in the bloc.

The bulk of trading in euro-denominated shares shifted overnight from London to Amsterdam after Britain fully left the EU on Dec. 31, 2020.

Finally, Ryanair (RYA.I) on Monday said that Boeing (BA.N) was “delusionary” for imposing a double-digit price increase for an order for the 737 MAX 10 during talks earlier this year.

Europe’s largest low-cost carrier in September abruptly ended talks with the US planemaker over an order of 737 MAX 10 jets, worth tens of billions of dollars because of differences over price.

Boeing did not immediately respond to an emailed request for comment.

“Boeing out of the blue sought a… substantial double-digit price increase. I don’t understand the strategy. We think Boeing’s approach to this is delusionary,” he said, describing Ryanair as Boeing’s only significant customer in Europe.

“Ryanair I think was very close, in active negotiations for a follow-on order for MAX 10 but Boeing walked away from the discussions because they are looking for a price increase at a time when prices should be falling so Boeing can recover its production,” O’Leary said.

“We’ll wait until the time is right and the price is right” for a Boeing plane order, Sorahan said.

UBP leader given 15 days to form ‘government’ in the north

Tourism revenue up 141% between January and July