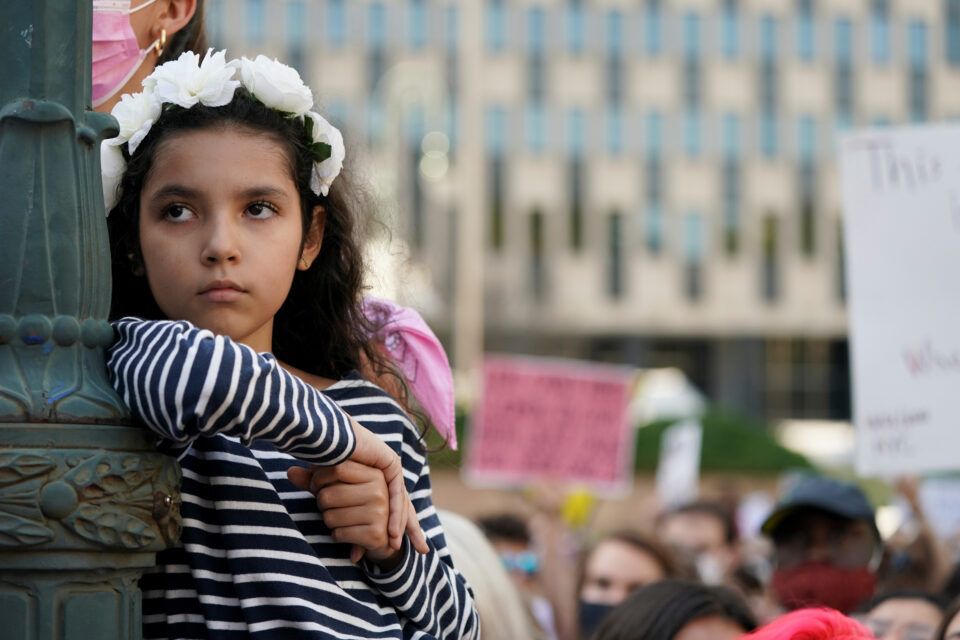 Abortion opponents hope the Supreme Court, with its 6-3 conservative majority, will roll back abortion rights or even overturn its 1973 Roe v. Wade decision that recognized a woman's constitutional right to terminate a pregnancy and legalized the procedure nationwide

The U.S. Supreme Court on Monday held arguments in a major abortion dispute, weighing whether Texas state courts should be barred from hearing cases brought against abortion providers under a Republican-backed law that imposes a near-total ban on the procedure and lets private citizens enforce it.

The justices were hearing separate challenges by President Joe Biden’s administration and abortion providers to the Texas law.

Abortion rights in the United States are hanging in the balance as the nine justices take up the dispute over the Texas law barring abortions after about six weeks of pregnancy before hearing arguments on Dec. 1  over the legality of a Mississippi measure prohibiting the procedure after 15 weeks of pregnancy.

In the first case, brought by abortion providers, the court on a 5-4 vote on Sept. 1 declined to halt the law . But there were signs in the early stages of the oral argument dealing with a multitude of procedural arguments that some of the five conservative justices in the majority on Sept. 1 were still mulling the legal issues.

Justice Amy Coney Barrett questioned clinic lawyer Mark Hearron about whether under the unusual structure of the law defendants could ever get a “full airing” of the constitutional claims on the right to abortion. Under the law, abortion providers can bring up the right to an abortion as a defense only after they have been sued.

Justice Brett Kavanaugh also indicated he was wrestling with the legal questions and was not certain to vote in favor of Texas. He expressed interest in an outcome discussed by liberal Justice Elena Kagan in which state court clerks would be barred from docketing lawsuits brought under the law.

Kavanaugh said the Texas law “exploited” a loophole in court precedent concerning when state officials can be barred from enforcing unconstitutional laws. He wondered if the court should “close that loophole.”

Kagan said the law was written by “some geniuses” to evade the broad legal principle that “states are not to nullify federal constitutional rights.”

Other justices, including conservative Chief Justice John Roberts, appeared skeptical about the idea of judges themselves being sued under the law. Roberts on Sept. 1 had dissented along with the court’s three liberal justices.

Some conservative justices, including Justice Clarence Thomas and Samuel Alito, raised the question of whether anyone would have standing to sue under the Texas law without having a direct injury.

Texas Solicitor General Judd Stone, defending the law, said “outrage” based on opposition to abortion would be grounds to bring a lawsuit.

The Texas dispute reached the Supreme Court with unusual speed. The justices agreed to take up  the matter on Oct. 22, bypassing lower courts that are considering the challenges.

The challenges will determine whether federal courts can hear lawsuits aimed at striking down the Texas law and whether the U.S. government even can sue to try to block it. If the justices keep federal courts out of the process by virtue of the law’s unique design, it could be replicated in other states and curtail abortion access in other parts of the country.

The Texas and Mississippi laws are among a series of Republican-backed abortion restrictions pursued at the state level in recent years. Lower courts blocked the Mississippi law.

Abortion opponents hope the Supreme Court, with its 6-3 conservative majority, will roll back abortion rights or even overturn its 1973 Roe v. Wade decision that recognized a woman’s constitutional right to terminate a pregnancy and legalized the procedure nationwide.

The law bans abortion at a point in time when many women do not yet realize they are pregnant. There is an exception for a documented medical emergency but not for pregnancies resulting from incest or rape.

The Texas measure takes enforcement out of the hands of state officials, instead enabling private citizens to sue anyone who performs or assists a woman in getting an abortion after cardiac activity is detected in the embryo.

That feature made it more difficult to directly sue the state, helping shield the law from being immediately blocked. Individual citizens can be awarded a minimum of $10,000 for bringing successful lawsuits under the law. Critics have said this provision lets people act as anti-abortion bounty hunters.

The abortion providers and Biden’s administration have called the law unconstitutional and explicitly designed to evade judicial review.

The law’s design has deterred most abortions in Texas, which is the second most populous U.S. state, behind only California, with about 29 million people.

The New Orleans-based 5th U.S. Circuit Court of Appeals in the abortion providers case refused to block the law and indicated that federal courts lack jurisdiction to intervene. After a federal judge in the Biden administration’s challenge blocked the law on Oct. 6, the 5th Circuit quickly reinstated it.

Mississippi has asked the justices to overturn Roe v. Wade. The Texas attorney general has signaled he also would like to see that ruling overturned.

Groups of protesters in support and opposition to the Texas law gathered outside the courthouse on a mild autumn day in the U.S. capital.

Julia Deluce, a coordinator with the group Students for Life, said the citizen-enforcement mechanism of the Texas law is a creative and necessary step to take on abortion providers.

Amy Hagstrom Miller, founder of Whole Women’s Health Clinic in Texas, said, “A ban like this doesn’t change the fact that people need abortions. It just changes the kind of abortions they can have.” She said she hopes the justices understand the impact of their decisions “on real people’s lives.”