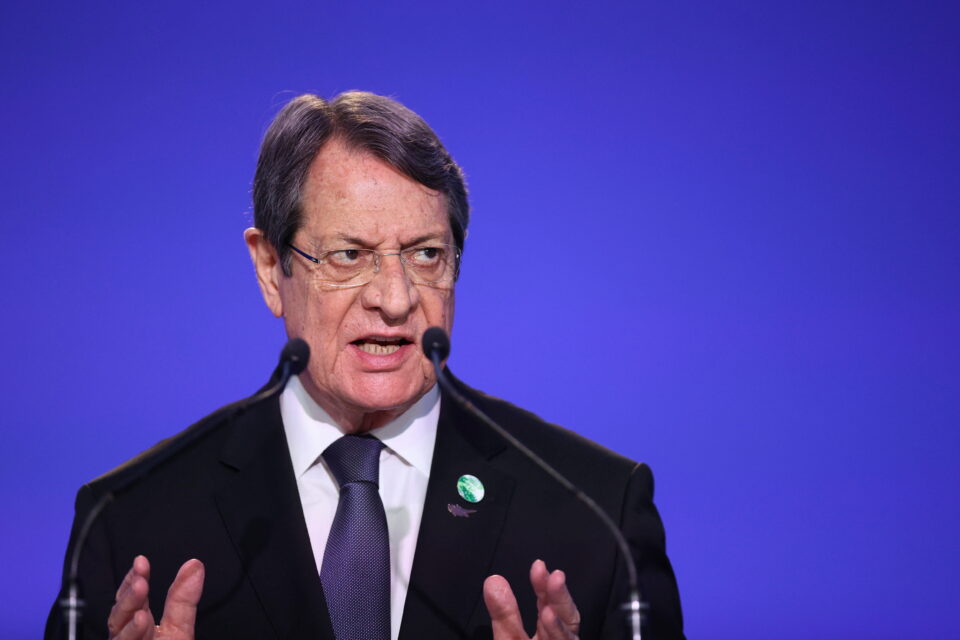 Cyprus will allocate more than €500 million by 2026 to policies to tackle climate change, President Nicos Anastasiades told the 26th UN Climate Conference (COP26) in Glasgow on Tuesday, as he pledged the country’s support to the declaration to combat deforestation.

The summit started this Sunday, bringing together world leaders to accelerate action towards significantly cutting global emissions to reach net zero by 2030 and cap global warming at the 1.5-2 degrees Celsius maximum set out by the Paris Agreement six years ago.

Despite these goals, “there is no sign that we are growing back greener,” he said, as global temperatures continue to soar while the world experiences “heat waves, devastating fires and deforestation, increased water scarcity, droughts, floods and extreme weather patterns”.

This is why the summit “can and should prove to be the historic milestone” in efforts made to address the above “in a way that is fair, efficient and transparent, whilst maintaining solidarity towards vulnerable countries that will be severely affected,” he added.

In this regard, Anastasiades said Cyprus fully endorses and supports the initiatives and declarations of COP26 on halting deforestation, on the transition to coal-free power, on accelerating transition to 100 per cent zero emission cars, as well as the US initiative on methane use.

Co-signed by over 100 countries including Cyprus, the Glasgow Leaders’ Declaration on Forest and Land Use pledges to halt and reverse deforestation and land degradation by the end of the decade, underpinned by $19 billion in public and private funds to invest in protecting and restoring forests.

“Forests matter to me and to my country because forests, forest-based sector, biodiversity and sustainable land use are an essential part in our transition to a modern, climate neutral and resource-efficient economy,” Anastasiades said in a video message.

He added that the commitments and actions proposed in the declaration will deliver “growing, healthy, diverse and resilient forests and ensure their significant contribution to our climate and biodiversity ambitions, thriving livelihoods in rural areas and beyond, and a sustainable forest bioeconomy”.

He added that Cyprus endorses the declaration and is committed to working collectively towards the goals it has set out while also promoting sustainable development.

Beyond the declaration, the president said that Cyprus remains fully committed to take all necessary measures to reach Paris Agreement and EU targets, with the aim of achieving a 55 per cent reduction in greenhouse gas emissions by 2030 and carbon neutrality by 2050.

To this end, he said Cyprus will allocate €500 million by 2026 for the adoption of new policies promoting the use of cleaner fuel such as natural gas and renewable energy sources, and the promotion of necessary investments in relevant areas of transport, agriculture, industry, land use and forestry and waste management.

The president acknowledged that as a small country, Cyprus’ contribution to world climate goals is limited, which is why it seeks to enhance regional cooperation, especially considering “the Mediterranean and Middle East is classified as a global ‘climate change hot-spot’”.

Cyprus has therefore undertaken the initiative of developing a Regional Action Plan involving more than 240 scientists from the wider region, as well as various international organisations who are already preparing policy recommendations, measures and specific solutions.

Once the scientific portion of the action plan has been finalised, Anastasiades added, Cyprus will hold a cabinet meeting and invite leaders to a summit that will initiate “appropriate coordination and monitoring mechanisms for the implementation of our commitments”.

“We are compelled, and people expect from us, to take on urgent action to address climate change and I am certain that you will agree with me that the time to act is upon us. Our vision should be none other than to look to the future with optimism and to use climate challenge as an opportunity to proudly demonstrate what all countries, what humanity can achieve when we join forces,” he finally said.

“I have no doubt that by decisively cooperating and acting together, with unity and greater urgency, we will be able to overcome the dire consequences of a warming planet and bring forward the necessary changes for a sustainable future”.

No rush of job-seekers after end of UK furlough