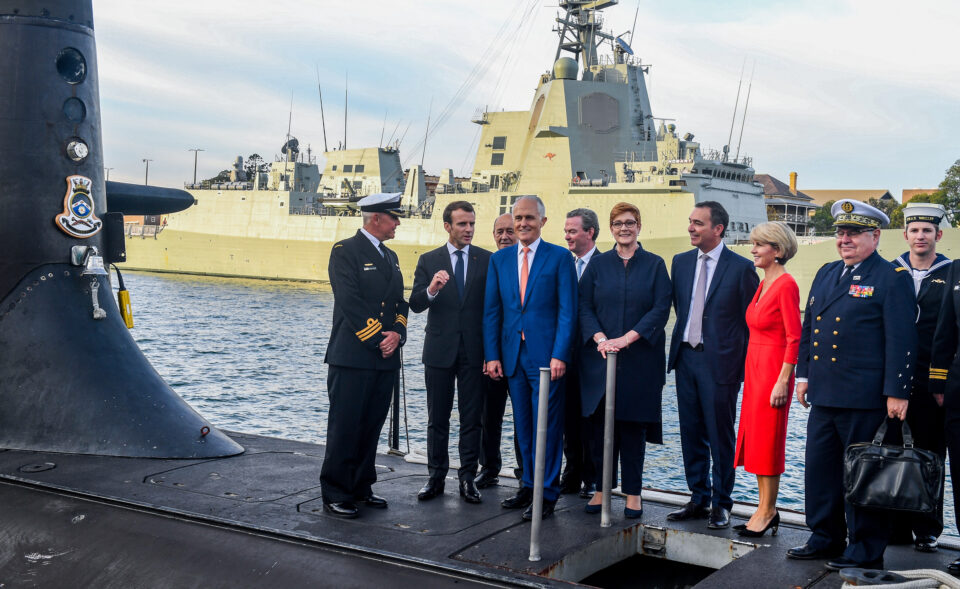 Happier times between as President Macron and former Australian Prime Minister Turnbull on board the submarine HMAS Waller in an Australia and France co-operation event. EPA-EFE/BRENDAN ESPOSITO

France’s ambassador to Australia, Jean-Pierre Thebault, said on Wednesday that Australia acted with deceit when it abruptly cancelled a multi-billion dollar deal with Paris to build a fleet of submarines.

“The deceit was intentional,” Thebault told media in Canberra on Wednesday.

“And because there was far more at stake than providing submarines, because it was a common agreement

on sovereignty, sealed with the transmission of highly classified data, the way it was handled was a stab in the back.”

Australia in September cancelled a deal with France’s Naval Group, opting instead to build at least 12 nuclear-powered submarines in a deal with the United States and Britain.

The new alliance, dubbed AUKUS, is designed to give Australia access to nuclear-powered submarines for the first time.

The decision has caused a major bilateral rift, with France recalling its ambassadors from Australia and the United States in protest. Thebault returned to Canberra last month and the speech on Wednesday is the first time he has spoken publicly on the bilateral relationship.

“These are not things which are done between partners – even less between friends,” said Thebault, who

added that the French government had no gripe with the people of Australia.

“Claims were made and claims were refuted, what is needed now is for us to move on,” Morrison told reporters.

French President Emmanuel Macron on Sunday said Morrison had lied to him about Canberra’s intentions.

Morrison has denied the claim. He said he had previously explained to Macron that conventional submarines would no longer meet Australia’s needs.

Morrison and Macron spoke last week before the Australian leader publicly sought a handshake with his French counterpart at the G20 meeting.

The destabilisation of the usually close diplomatic relations between the two nations now threatens to spill over into trade consequences.

The European Union has twice postponed a planned round of free trade talks with Australia. In solidarity with France, European Commission President Ursula von der Leyen questioned whether the bloc could strike a trade deal with Australia.

The relationship was tested further this week after Australian media published leaked messages between Morrison and Macron that attempted to counter France’s claim that Australia did not give it sufficient warning that the contract would be cancelled.

Thebault said the leaking of the messages represented an “unprecedented new low” and he said that it sent a worrying signal to heads of state that confidential correspondence could one day be “weaponised against you”.

“We had a major political leader call the prime minister of Australia a liar, and you can’t do that diplomatically,” Joyce told the Australian Broadcasting Corporation.

“This isn’t some tin-pot nation in the middle of nowhere… if a person calls you a liar, what are you going to do? You have to defend it and say you are not.”

U.S. President Joe Biden said last week that the handling of the new pact had been clumsy, adding that he had thought France had been informed of the contract cancellation before the new pact was announced.