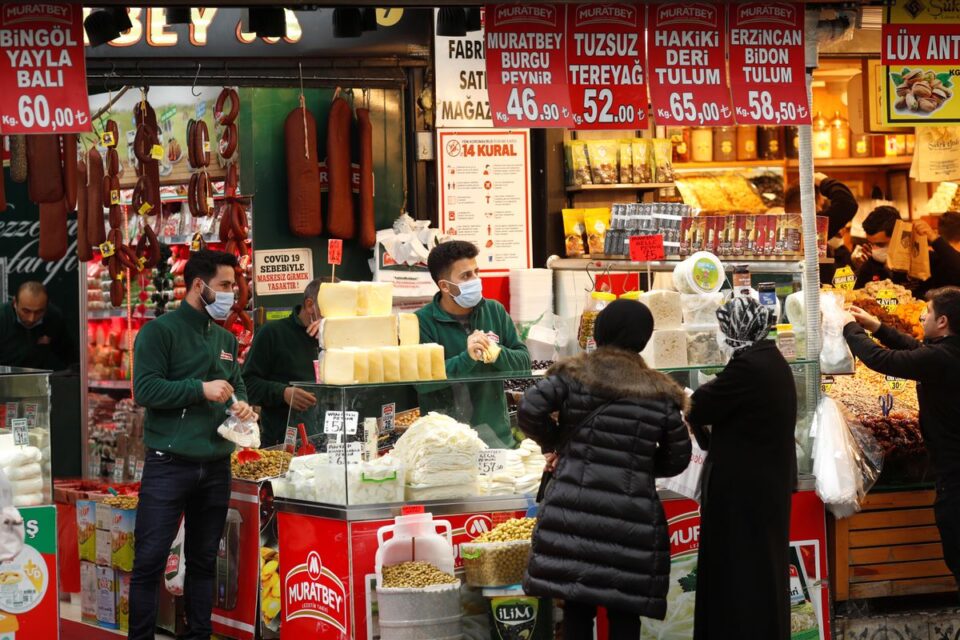 Turkey’s annual inflation rate rose to its highest in more than 2-1/2 years in October, data showed on Wednesday, as the central bank, under political pressure to provide more monetary stimulus, has aggressively cut its policy rate in recent months.

While that was below the 20.4 per cent rate expected in a Reuters poll, it was the highest level since January 2019 and far above the central bank’s 5 per cent target.

With consumer prices and monetary policy heading further in opposite directions, Turkey’s real yields dove deeper into negative territory, a red flag for investors as most other central banks globally move towards tightening policy.

Month-on-month, inflation rose 2.39 per cent on the back of clothing and tobacco products, the statistics agency said, compared to a forecast of 2.76 per cent in a Reuters poll.

The producer price index jumped 5.24 per cent month-on-month in October for an annual rise of 46.31 per cent, the data showed, suggesting inflation should remain elevated for several more months, analysts said.

The central bank shocked markets in September by starting an easing cycle despite the high inflation, and it has since cut the policy rate by 300 basis points, sending the lira currency to record lows.

The bank, under pressure from President Tayyip Erdogan to provide more monetary stimulus, says the inflation pressure is temporary and recently put greater emphasis on core inflation measures, which are lower, and on the need to achieve a current account surplus.

The bank has also signalled that more, but smaller, rate cuts are likely before the end of the year.

The core “C” inflation measure, which strips out energy, food and some other goods, eased to 16.82 per cent in October from near 17 per cent a month earlier.

Analysts say the rate cuts – which set Turkey apart from the policy tightening globally – are a risky mistake given the lira sell-off over the past months and worldwide inflation pressures.

Annual inflation, which remained in double-digits for most of the past five years, has risen in 12 of the last 13 months and it was 19.58 per cent in September, already above the current policy rate of 16 per cent. The central bank forecasts it will dip to 18.4 per cent by year-end.

But the government’s planned fiscal stimulus sets the stage for more price pressures in the months ahead, according to economists.

Turkey’s government is preparing to boost wages and cut some taxes to support lower-income households that are battling high inflation, two senior officials familiar with the plan told Reuters this week.

“There will be a pick-up in domestic demand from the start of next year through this (fiscal) channel in particular,” said a senior Turkish official who requested anonymity.

“We will see inflation going somewhat higher. In this period, it does not seem like inflation is completely at the uppermost target,” the person said earlier this week.

Turkey’s lira pared losses versus the dollar after the data was released though it is still some 23 per cent weaker this year.