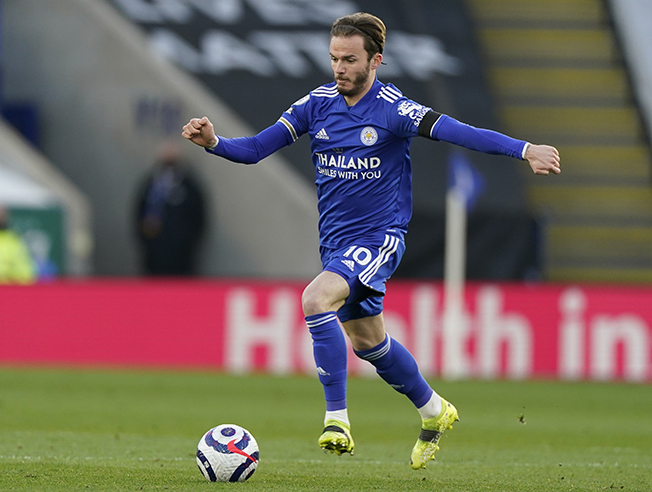 Midfielders Barnes and Maddison are among a trio in the Foxes squad to have been unwell in the build-up to the Group C contest at the King Power Stadium, along with defender James Justin, who was unavailable anyway as his recovery from a long-term knee injury continues.

Rodgers told a press conference on Wednesday: “We’ve got a few players who have had the sickness bug that has been going about, so we have to assess that and see where they’re at.

“If they’re not available, I’d expect them to be OK for the weekend (Leicester’s next Premier League match is at Leeds on Sunday).

“Harvey Barnes, James Maddison and James Justin – those three guys unfortunately have been down for a few days. They’re coming around now. Whether they are going to be at the best level for tomorrow, we shall wait and see.”

Rodgers, who confirmed the sickness was not coronavirus-related, also said Ricardo Pereira was being assessed – he missed Saturday’s 2-0 loss to Arsenal having felt some tightness from the previous match – and that Marc Albrighton remained “a few weeks away” due to his injury.

Ayoze Perez, who has recovered from his own bout of illness, could make his return to action. Leicester are also monitoring Wifried Ndidi, who was back in the matchday squad as an unused substitute on Saturday after a hamstring problem.

Rodgers’ men are third in Group C with four points from three games – two points less than Legia Warsaw, the same as Napoli, and one more than Spartak. They drew 2-2 at home with Napoli, then lost 1-0 at Legia before winning 4-3 at Spartak last time out.

Rodgers said: “It’s a very important game for us. We put ourselves in a position now with two home games, and we want to win those.

“We know it’ll be a difficult game. We had to work very hard out there. If we can minimise the mistakes, and then play to our level and quality, it gives us a great chance to get three points.”

He added: “Ideally we’d love to win the group. But the overall objective is qualification, and if we do that and have to play the (play-off) games in February, that’s what we do.”

The win at Spartak saw Leicester fight back from 2-0 down with Patson Daka, the summer signing from RB Salzburg, scoring all four of their goals.

The 23-year-old Zambia international, speaking at Wednesday’s press conference prior to Rodgers, admitted that game was the best moment of his career to date.

And Daka added: “I’m sure their (Spartak’s) focus and attention is like on me, but I think it’s also a great opportunity for other players because if they concentrate on me, they’re going to leave other players free and anyone in our team can harm them, so they won’t know what is going to hit them.”

With his quartet against Spartak, Daka in one match became Leicester’s joint all-time top scorer in UEFA competition, alongside Barnes and Jamie Vardy.

Daka stressed breaking that record was “not the main focus”, said it had been “amazing” working alongside Vardy, and also spoke about support he has had from back home, including from Zambian president Hakainde Hichilema.

“He has been so supportive, not only to me but to every Zambian out there who are doing well and pushing for their dreams,” Daka said.

“The country is very proud of us, what we are doing. It is not really pressure but a very big motivation for me because I know I carry the hope of 18 million Zambians with me. Even as I’m here, I’m doing it for them, making a pathway for them.”

Moyes makes admission ahead of his 1,000th game as a manager

What happens to your body when you eat spicy food?