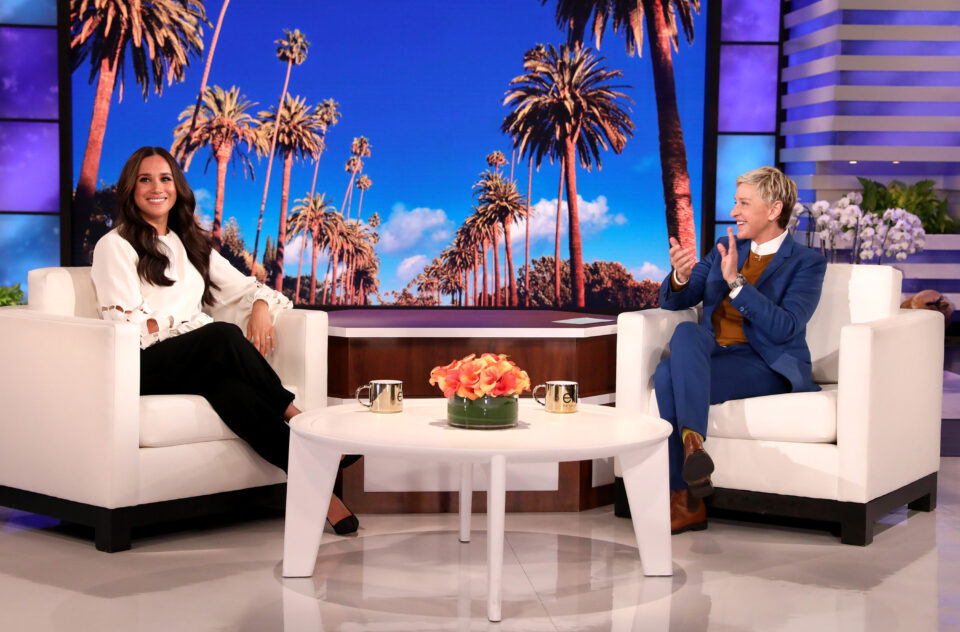 In her televised interview with Ellen DeGeneres, Meghan told of how Archie “loves being a big brother” to his baby sister Lili.

After sharing a picture of the two-year-old feeding chickens while wearing yellow wellies in their home in Montecito, California, Meghan said Archie “loves to dance”.

She also revealed that he dressed as a dinosaur for Halloween, while Lili was a “little skunk like Flower from Bambi”.

The former actress’ high-profile appearance comes eight months after the Sussexes’ controversial sit-down with Oprah Winfrey which left the royal family in crisis.

Meghan and Harry have until now remained private about Lili, who was born in June and was named Lilibet after the royal family’s nickname for the Queen.

They are yet to share a photo publicly of their daughter.

The duchess told chat show host Ellen DeGeneres that “Someone told H (Harry) and I that when you have one kid it’s a hobby, and two children is parenting.

She also said that Harry “loves” the weather and lifestyle in California.

The duchess said Archie “loves to dance” and added she will do the cooking on Thanksgiving.

She told the audience: “I love to cook, we’ll be (at) home and just relax and sort of settle in. It’s our second Thanksgiving (at) home (in) California, so it will be nice.”

DeGeneres then brought up that Meghan is a “great dancer”, to which the duchess replied: “I love to dance, Archie loves to dance now, too.”

The pair quit as senior working royals in 2020 in a bid for personal and financial freedom, and have since signed multi-million pound deals with Netflix and Spotify.

Meghan talked about how Lili was teething, saying “Anything to relieve that?”, before DeGeneres jokingly suggested tequila.

The timing of Meghan’s broadcast has taken place just over a week after she apologised to the Court of Appeal for forgetting that she authorised an aide to brief the authors of the controversial biography, Finding Freedom, about her and Harry.

The appeal by the publisher of The Mail On Sunday, Associated Newspapers Limited, over the privacy case surrounding a letter the duchess wrote to her estranged father also heard how in text messages Meghan chose to address Thomas Markle as “Daddy” because it “would pull at the heart strings” if the letter was leaked.

Meghan spoke of how she spent the celebration with DeGeneres and her wife, actress Portia de Rossi – her neighbours in a celebrity enclave in California.

She said: “We were home and we saw you guys, which was great.

“But no, we wanted to do something fun for the kids and then the kids were just not into it at all.

DeGeneres told how Harry persuaded Archie to put his dinosaur costume on, saying: “Finally, Harry talked him into putting the head on. But Lili was a skunk… it was so cute.”

Meghan replied: “She was a little skunk. Like Flower from Bambi.”

The duchess also revealed how she and Harry once went to a post-apocalypse themed Halloween party disguised in costumes when they were dating to have “one final night on the town” before it was revealed they were a couple.

They were joined by Harry’s cousin, Princess Eugenie, and her now husband, Jack Brooksbank, who were visiting them in Toronto, Canada.

“The four of us snuck out in Halloween costumes to just have one fun night on the town before it was out in the world that we were a couple,” Meghan said.

She added: “It was a post-apocalypse theme. So we had all this very bizarre costuming on and we were able to just sort of have one, final, fun night out.”

The news broke that they were a couple at the end of October in 2016.

The duchess also promoted her children’s book, The Bench, which she said she wrote as a poem for Harry on Father’s Day.

“It was about my observation of him and him being a dad, which was the most beautiful thing to watch,” she said.

DeGeneres asked: “Does Archie know he’s in here? Does he know that’s him and what does he think of the book?”

Meghan replied: “He does. On that first page that you open and you see our dogs, he goes, ‘That’s Pula. That’s Guy’.”

The Sussexes have a black Labrador named Pula and a beagle called Guy.

Meghan also spoke out about paid parental leave, after doing the same earlier this month.

She said the US “is the only country in the world that does not have a paid federal family leave programme”.

The duchess added: “I will do everything I can to make sure we can implement that for people.”

Meghan also told how she made hair scrunchies with fabric and elastic bands and sold them at school when she was a youngster.