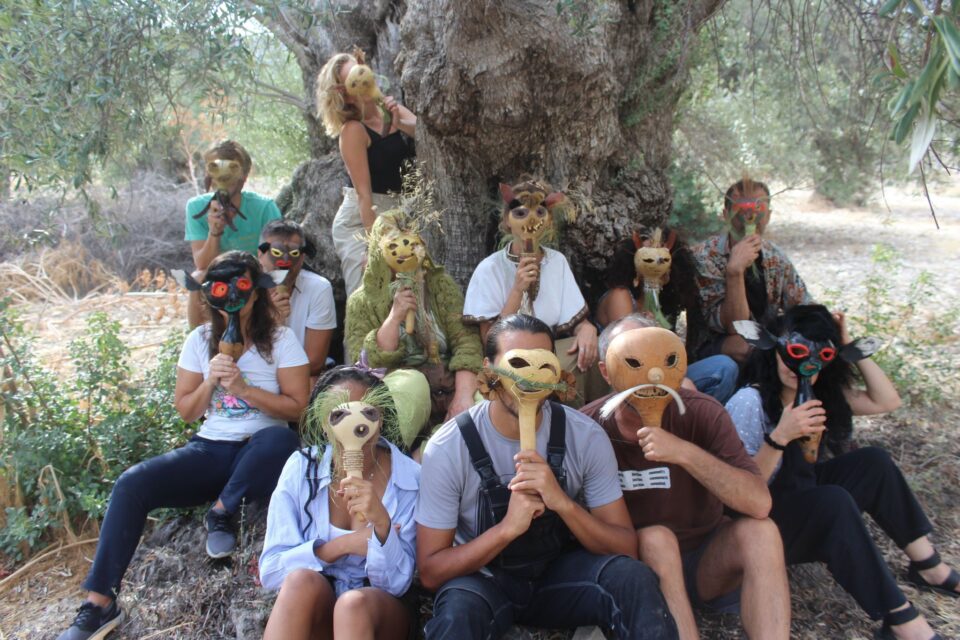 When I talk about green men, I’m not talking here about environmental heroes, although certainly Cyprus is in need of a few. I’m talking about that strange, often misunderstood, personification of humankind’s relationship with nature, especially trees.

Typically, a “Green Man” has leaves sprouting from the mouth or nose and leafy hair, beards and/ or eyebrows and they’re likely to be found in or outside churches. Although the origins of the leafy or foliate faces are rather lost in time, there’s certainly something of the wild and pagan times that preceded even the ancient Greeks and Romans; perhaps harking back to those early Neolithic cultures that go back right to the core of human settlement in Europe.

It’s rather ironic given that women and matriarchal societies were so important in pre-Christian Europe, that there are very few ‘green women’ to be spotted. I think it’s safe to say that the early Christian and Orthodox churches rather excluding policy towards women is to do with that lack of foliate feminine faces.

I could go on about the churches non-recognition of the role of Mary Magdelene and the non-acceptance of the gospel written by her, but this is a whole different story. Suffice to say, Cyprus is a great place to find beautiful examples of the Green Man, from Greek and Roman right through to Venetian and even Ottoman.

So, why do I talk about it now? For me, the wealth of symbolic art surrounding the Green Man in Cyprus (and all over Europe) demonstrates that our ancestors were much more in tune with nature than we are and our de-connection from trees, forests, wildlife and nature, plus massive over-consumption has led to the environmental crisis we are in right now. That crisis is characterised by loss of biodiversity, pollution and global warming brought about by a huge release of greenhouse gases into the atmosphere (mainly from burning non-renewable fossil fuels).

We certainly need a hero, and just maybe he’s staring at us rather coldly and disapprovingly from a church wall. If we raise the profile of the historical and ancient Green Man, we can use him in education and try to reach young people – they being those who will inherit the mess we’ve created.

History of the Green Man in Cyprus

The earliest people in Cyprus were thought to be foragers and hunter gatherers more than 10,000 years BC and there is evidence from Aetokremnos near Limassol of these pre-farming Mesolithic people. They, and the later Neolithic people coming from Anatolia lived side by side with pygmy hippos and elephants. They were certainly living with nature and began to plant early varieties of cereals and domesticate the wild goats and wild sheep (mouflon), although they were still hunting fallow deer and fishing. They are called the people of the PPNB (pre-pottery Neolithic B) era and their art links then to the Neolithic Vinča-culture that spread west from Anatolia and dominated nowadays Northern Greece, Bulgaria, Romania and Serbia. Vinča and Cypriot PPNB art has lots of animal motifs and both cultures seem to have worn masks and be rather matriarchal (led by women). We are not sure that they worshiped nature, but they certainly created lots of clay votives (offered figures) of animals.

With the arrival of Achaean Greeks around 1,200 BC, there was an introduction of their language, religion and customs and we see the first reverence for nature. This divinity was the forest god, Hylates. The arriving Greeks linked him to Apollo and he became Apollo of the woods. He was worshiped from the 3rd century BC until the 3rd century AD by the original Cypriots, Greeks and Romans. We can call him the first Green Man and his shrine is at the Temple of Apollo Hylates near Kourion (Limassol).

Helping in the investigation of Cyprus’ Green Men are the ‘Forest Guardians’, a worldwide group who are a powerful online platform who have sent almost 40 individuals to Grampus Heritage and their partners in Cyprus, Romania and Slovakia.

Although Cyprus was later colonised by Phoenicians, Assyrians, Egyptians and Persians, Hylates was secure and these other settlers probably added more to the personification of tree, forest and nature worship. Archaeologists have not yet been able to gaze on the face of Hylates but the Greeks and then the Romans mixed in Dionysus, Pan, Oceanus and Silvanus and the first Green Men, as we perceive them today began to appear. The game-changing Roman Emperor Trajan followed the cult of Hylates (Apollon God of the Forest) and probably had a hand in all this. Now we do see faces in mosaics (Paphos) and Corinthian pillar capitals…. The Green Man is born!

The Roman settlers and legions took the Green Man all over present-day Europe, the Near East and North Africa, the old Roman Empire. More mixing in of local forest gods from the Celts (Herne the Hunter) and Germanic tribes (the wild men) and the face we know today was cemented in Mediaeval culture. As is so often the case, the Christian church ‘captured’ the Green Man and put him in churches to draw in more (pagan) worshipers and convert them to the Christian cause – now he is the face with the sprouting oak leaves that is so popular today. The Crusaders, Franks, Venetians and Ottomans all brought the leafy faces back to Cyprus from 1191 onwards, a thousand years after the first Greco-Roman faces.

Dionysus, Pan, leaf bedecked personifications of spring and summer, plus emerging faces on pillar capitals and the mysterious ‘wild man’ were all very much demonstrating Greco-Roman close contact with nature as seen in the Paphos mosaics and the Agora at Kourion. They are the first recognisable images of the Green Man.

The Crusaders, Knights Templar, Knights of St. John and the French Lusignan dynasty all used the Green Man symbolic leafy face on churches in Nicosia, Famagusta, Bellapais, Morphou and Choirokoitia. It was a productive and creative time. The local Greeks made up legends about the leafy faces and linked them to this time of abundance and plenty. The incoming knights were all Catholics and this more modern form of Christianity did not sit too well with the Orthodox Greeks

Italian style Green Men appear in churches in Nicosia, Kato Drys and Pano Lefkara. All were built in the Ottoman period but certainly drew on skills taught by the Venetians. The ruling Ottoman Turks allowed Christianity to flourish.

Rare Ottoman Green Men appear in embroidery but also in churches built in the Ottoman time. They are usually floral arrangements suggesting faces because of Islamic proscriptions against portraying the human form. The stony face from the church in Arakapas might have been a deliberate act by Ottoman rulers to dominate the church doorway, but for sure it’s a Green Man with a connection to nature that we’ve lost a bit over the last 150 years.

With Kato Drys Community Council and “For Lefkara”, Grampus Heritage work hard to keep the Green Man a current and topical subject in terms of a representation of local skills, local products and sustainable behaviour, like recycling and the lowering of personal carbon footprints. Panayiota Demetriou, a great mosaic artist trained Alán Tod and Seán Ferrari of the Forest Guardians to create mosaic green men and all 11 Guardians made masks to somehow represent the ancient spirits of nature and the forest.

Of course many of the Forest Guardians are women, so we use art to level the playing field when it comes to cherishing nature and reawakening the Green Man/Green Woman, that is somehow there in nearly all of us and just needs a push!