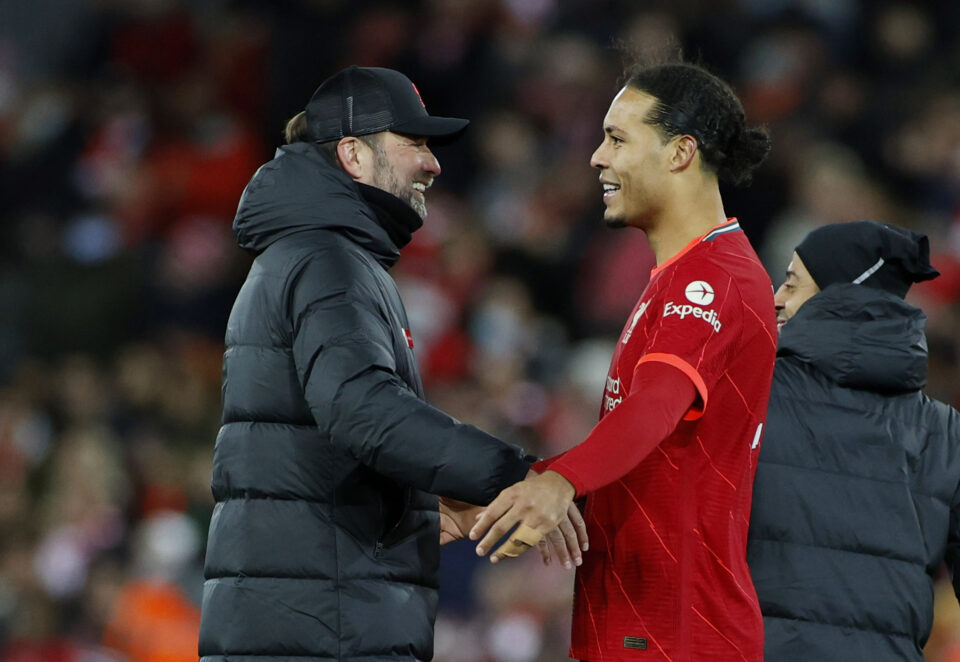 Diogo Jota’s early double set Liverpool on their way to a crushing 4-0 victory over Southampton on Saturday to move up to second in the Premier League standings.

The Portuguese forward steered home Andrew Robertson’s cutback to open the scoring after 97 seconds, before another simple finish following fine work from Mohamed Salah put Liverpool two goals up and in command inside 32 minutes.

Midfielder Thiago Alcantara added to his stunning goal against Porto in the Champions League in midweek with a third five minutes later and Virgil van Dijk helped himself to a fourth against his former club early in the second half.

Jota had a great chance to complete his hat-trick but could not connect from close range as Liverpool eased to a win that lifted them above champions Manchester City, who play West Ham United on Sunday, and one point behind leaders Chelsea.

Southampton had their moments but they could not cope defensively and the loss left them 14th in the standings.

Villa moved up to 11th in the standings, level with 10th-placed Palace on 16 points. The defeat was Patrick Vieira’s first at home since being appointed Palace manager and their first since losing at Liverpool in September.

Villa took advantage of Palace’s vulnerability on set-pieces when Ashley Young’s corner in the 15th minute was delivered deep into the box, where Matt Targett controlled the ball and shot low through the crowd to score.

Palace did not have a shot on target until the 79th minute when Christian Benteke’s acrobatic effort with his back to goal was saved by goalkeeper Emiliano Martinez.

Villa doubled the lead late in the game when a flowing move down the left found John McGinn at the edge of the box and the midfielder curled his shot past the outstretched arms of Vicente Guaita.

Palace scored a consolation in stoppage-time when Cheikhou Kouyate’s cross to the near post found Marc Guehi, who poked the ball past Martinez, but Villa held on for the three points.

Wolverhampton Wanderers were held to a 0-0 draw at lowly Norwich City in the Premier League on Saturday.

Dean Smith’s Norwich, who had won their last two games, had the better of the contest against their sixth-placed opponents but were unable to carve out enough real openings.

Wolves played conservatively and the nearest they came to scoring was a Joao Moutinho shot that was saved by goalkeeper Tim Krul after a poor back pass from Grant Hanley.

Norwich right-back Max Aarons forced Wolves keeper Jose Sa into action just before halftime with a low shot after a strong burst into the box.

Although the home side were on top after the break, Sa had little to do other than get down to keep out a toe-poked effort from Finnish forward Teemu Puki.

Norwich are second-bottom on nine points, two points from the safety zone, while Wolves have 20 after 13 games.