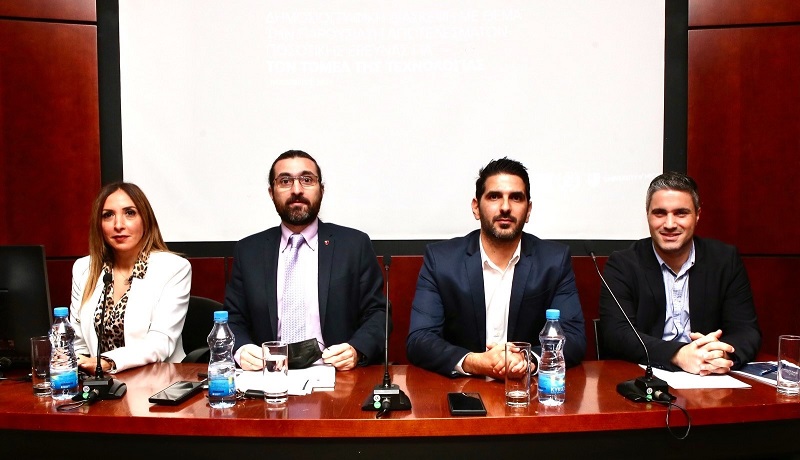 The technology sector can become the new mainstay of the Cypriot economy and offer high-level career opportunities to our country’s youth.

These were some of the key conclusions that emerged from the findings of an October 2021 survey conducted by IMR/University of Nicosia™ on behalf of the non-profit organisation TechIsland.

The purpose of the survey was to explore citizens’ views and perceptions regarding the tech sector’s impact on Cyprus’ economy, compared to other sectors, the prospect of Cyprus becoming a technological hub and the impact this would have on the economy as well as on the young people of our country.

The survey also offers an important tool to understand how citizens view the technology sector and what steps they believe should be taken to strengthen it, and, by extension, empower the Cypriot economy.

The survey’s findings indicate the chief problem citizens face today is economic, and that most generally agree the Cypriot economy should not solely be based on the traditional sectors of activity, with there being a need to expand the sectors on which the country’s economic model is based. In particular, technology, health and education sectors are top of people’s list of priorities, ahead of traditional sectors such as tourism, financial services and real estate, and this could well be the first time this has occurred.

As reflected in the survey, the overwhelming majority of respondents believe Cyprus is able to attract international high-tech companies and the talented human resources required by the sector. Moreover, they favour expanding the incentive framework of attracting them to Cyprus.

Investing in new sectors, decoupling from traditional ones

Investment in new economic sectors and disassociating the Cypriot economy from traditional ones is among the major conclusions clearly emerging from the survey results. When asked how necessary it is to expand the sectors on which our country’s economic model is based, 84 per cent of respondents answered quite or very necessary, thus confirming the need to disassociate the economy from traditional sectors and invest in new ones. 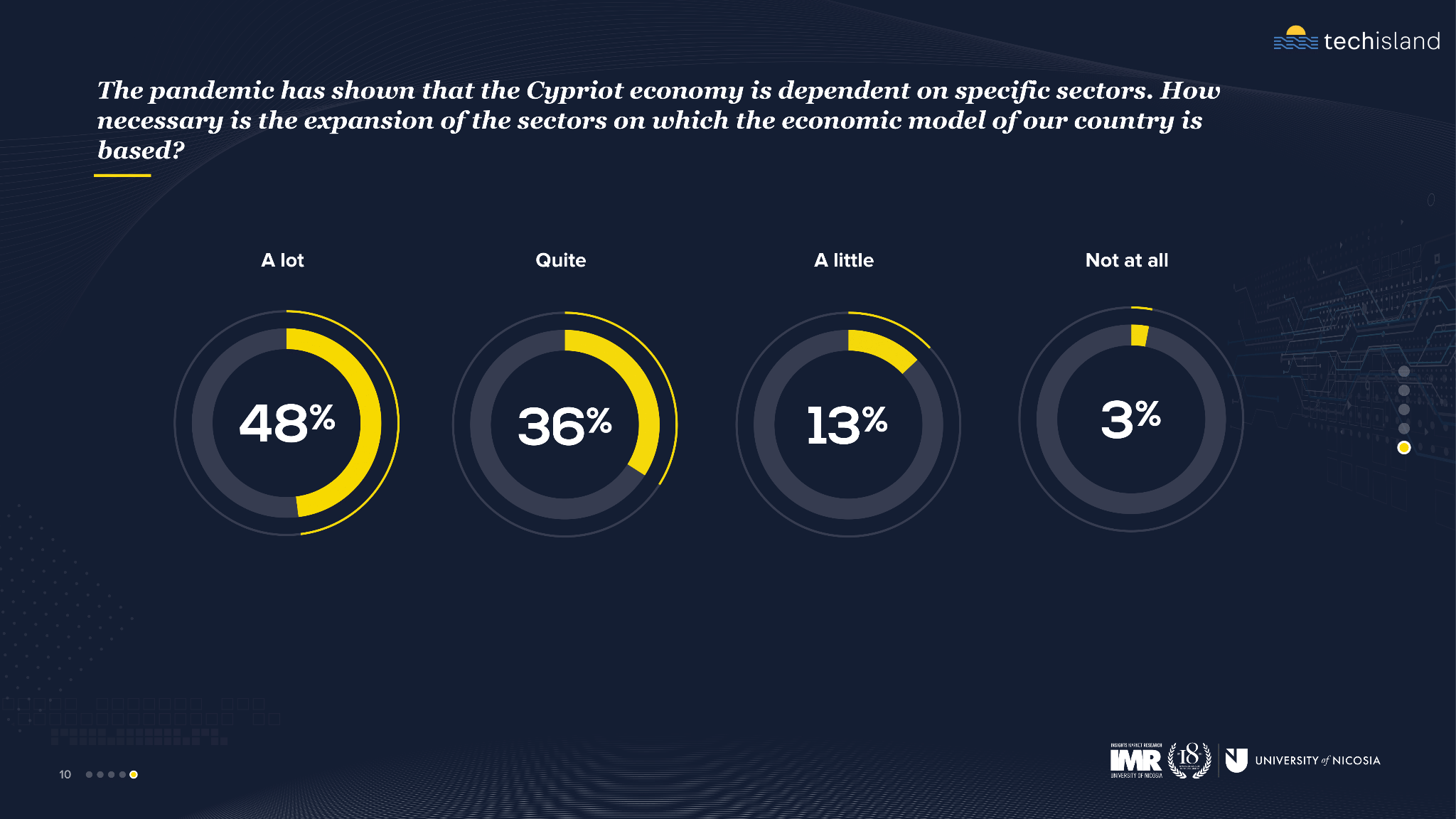 Respondents’ answers were also along the same lines regarding the areas on which to focus to promote economic development. More specifically, in response to the question: “Which sectors do you believe we should invest in, as a country now, in order for our economy to grow?”, respondents placed technology, education and health in the top three positions, with each percentage reaching or exceeding 60 per cent.

This result was surprising, as rates recorded for these three sectors were higher than those for the traditional sectors of economic activity including tourism, financial services and real estate, despite the long-established perception that the latter are the main pillars supporting the development of the local economy. According to the survey, the three traditional sectors were at relatively low levels, with rates of 55 per cent, 32 per cent and 19 per cent respectively. 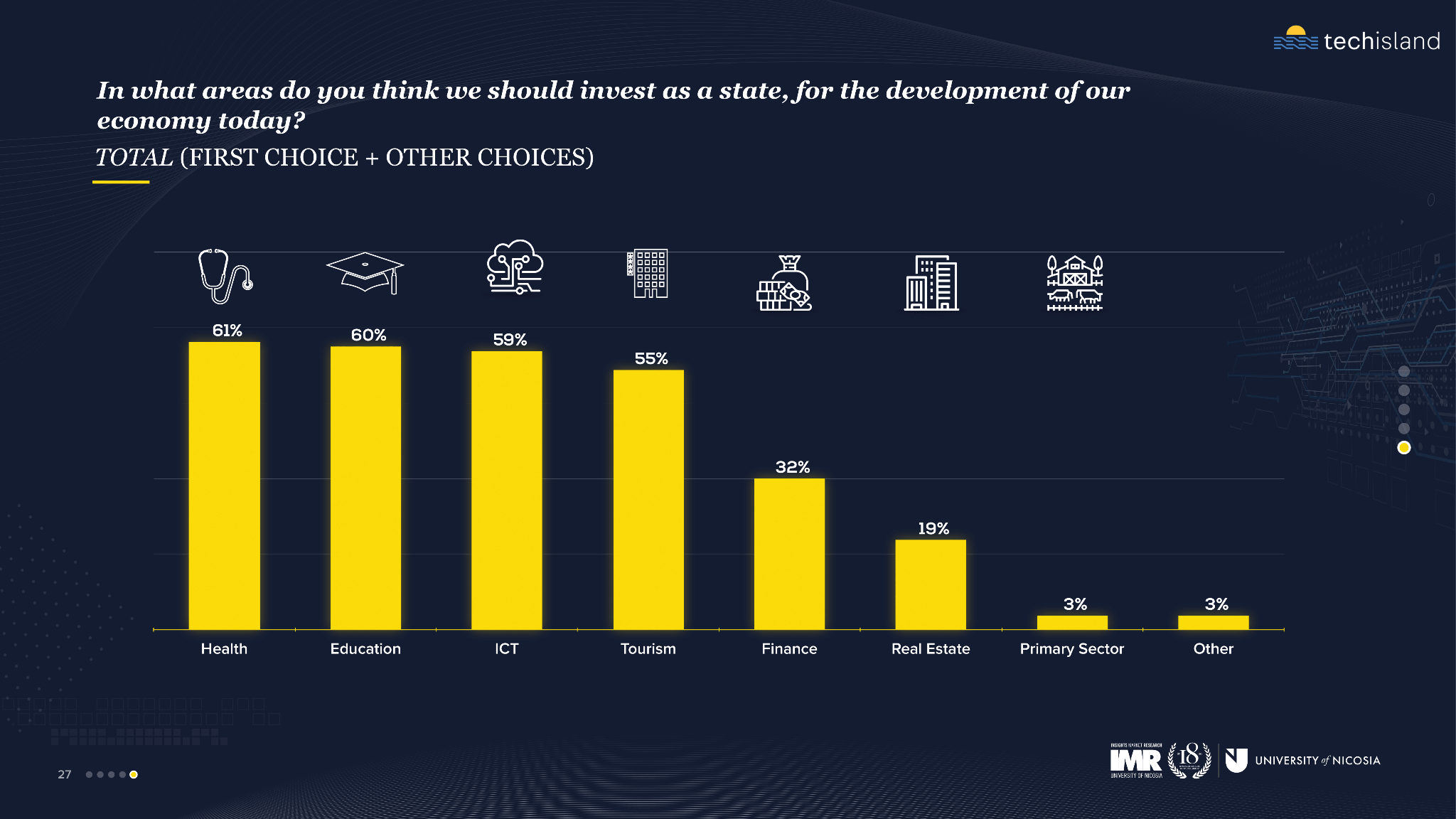 When asked: “What impact do you think the technology/ICT sector has on the country’s economy today?”, 76 per cent of respondents answered that it has a considerable or adequate impact, while the results expressed in regard to the future impact that the sector may have on the country’s economy, if and when Cyprus becomes a base for high-tech companies, were impressive as the percentage of positive responses reached 86 per cent.

When asked whether the sector can become the main pillar of our country’s economic development in the coming years, citizens responded along the same lines, with 82 per cent answering positively, thus confirming the positive perception that prevails regarding the positive economic effects of the sector and its strong prospects. 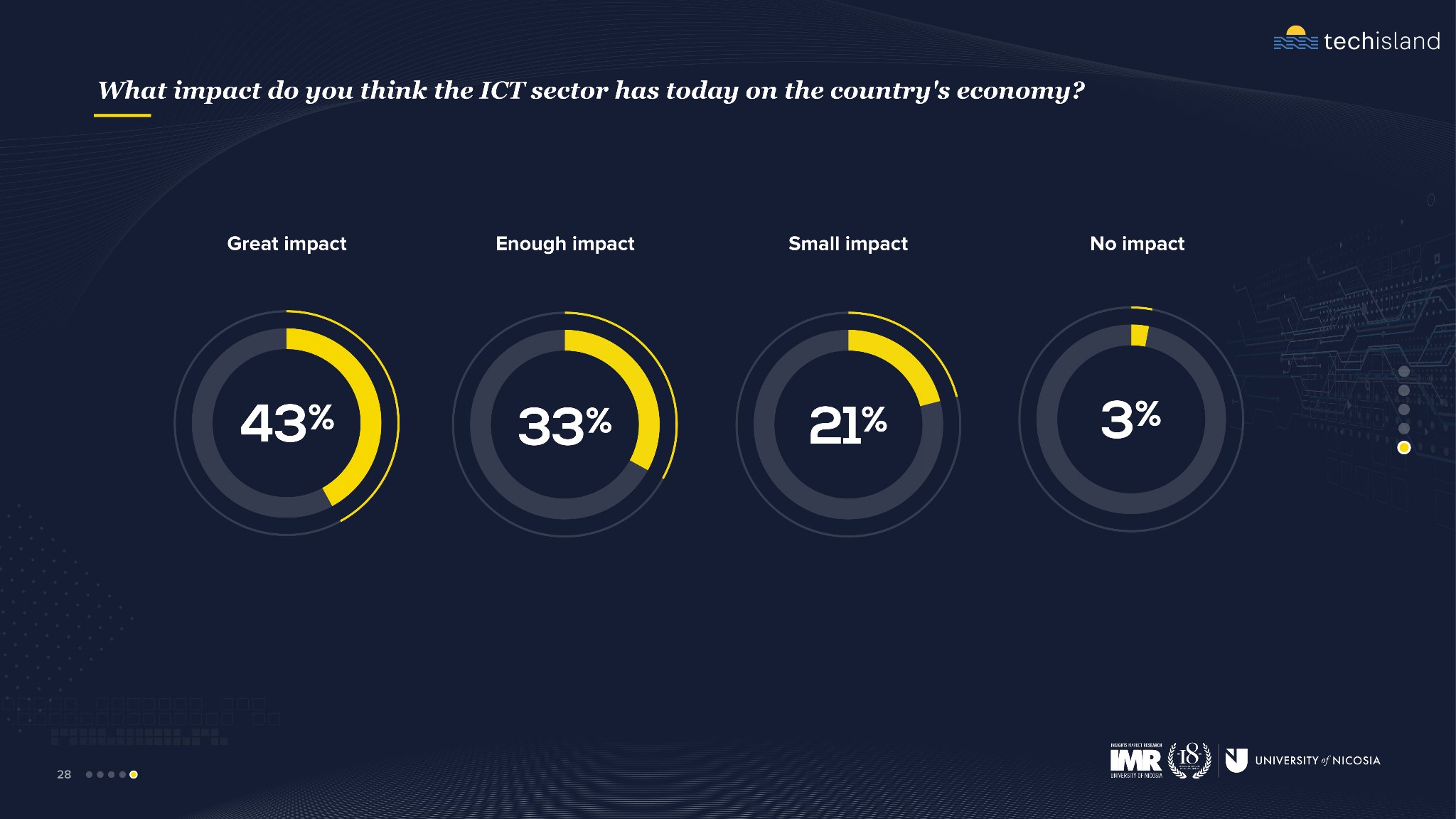 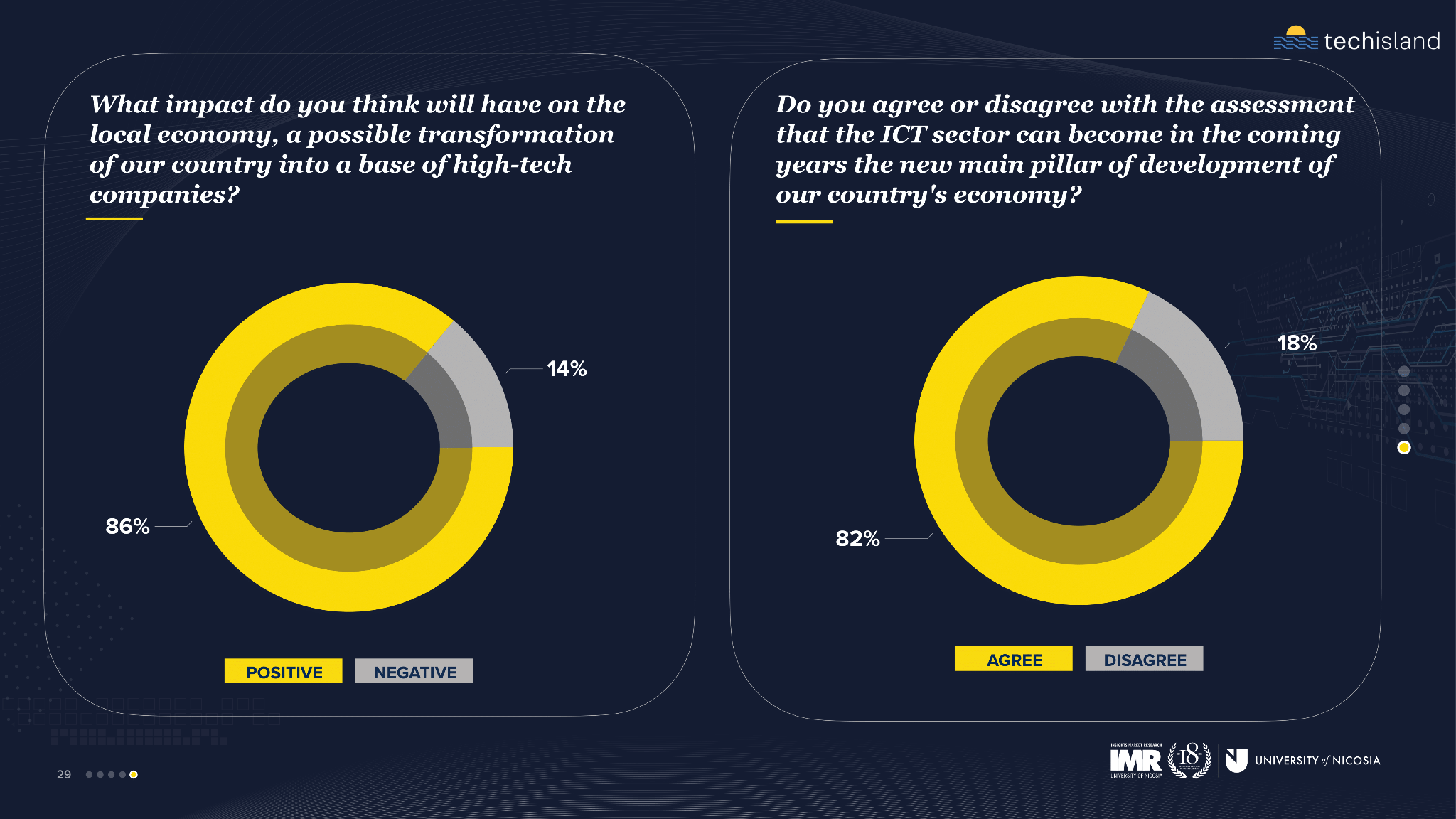 The research also indicated that the sector is especially attractive to young people, as are the professional opportunities it can offer. When asked: “To what extent would you say the technology sector can present an opportunity for a successful career for young people?”, 93 per cent and 95 per cent of respondents respectively, answered positively, highlighting the perception of citizens as to the positive impact the sector can have on the labour market and the local economy in general. It is also noteworthy that the sector’s attractiveness index in the under-25 age group reaches 81 per cent, outperforming any other sector in this age group. 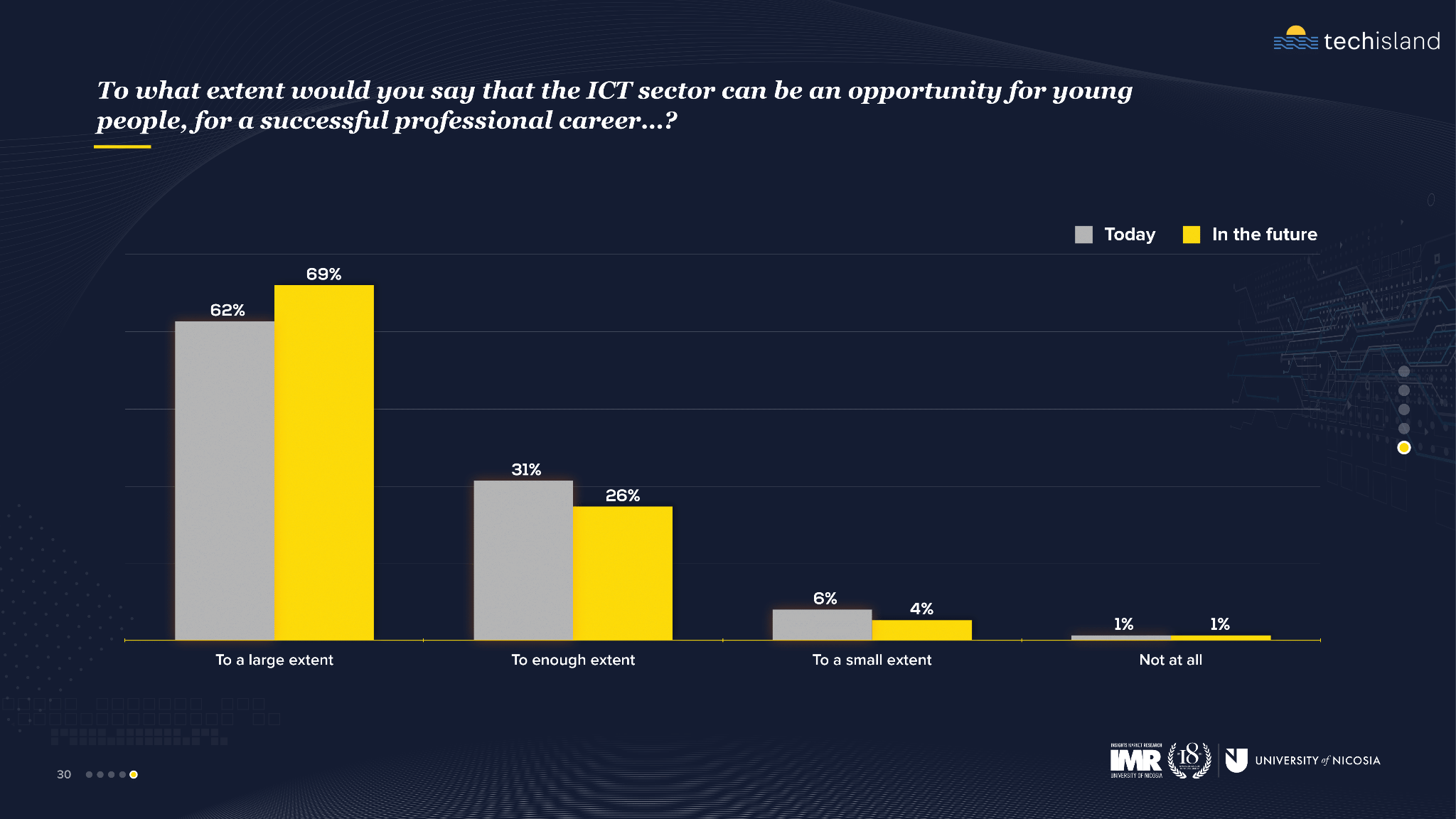 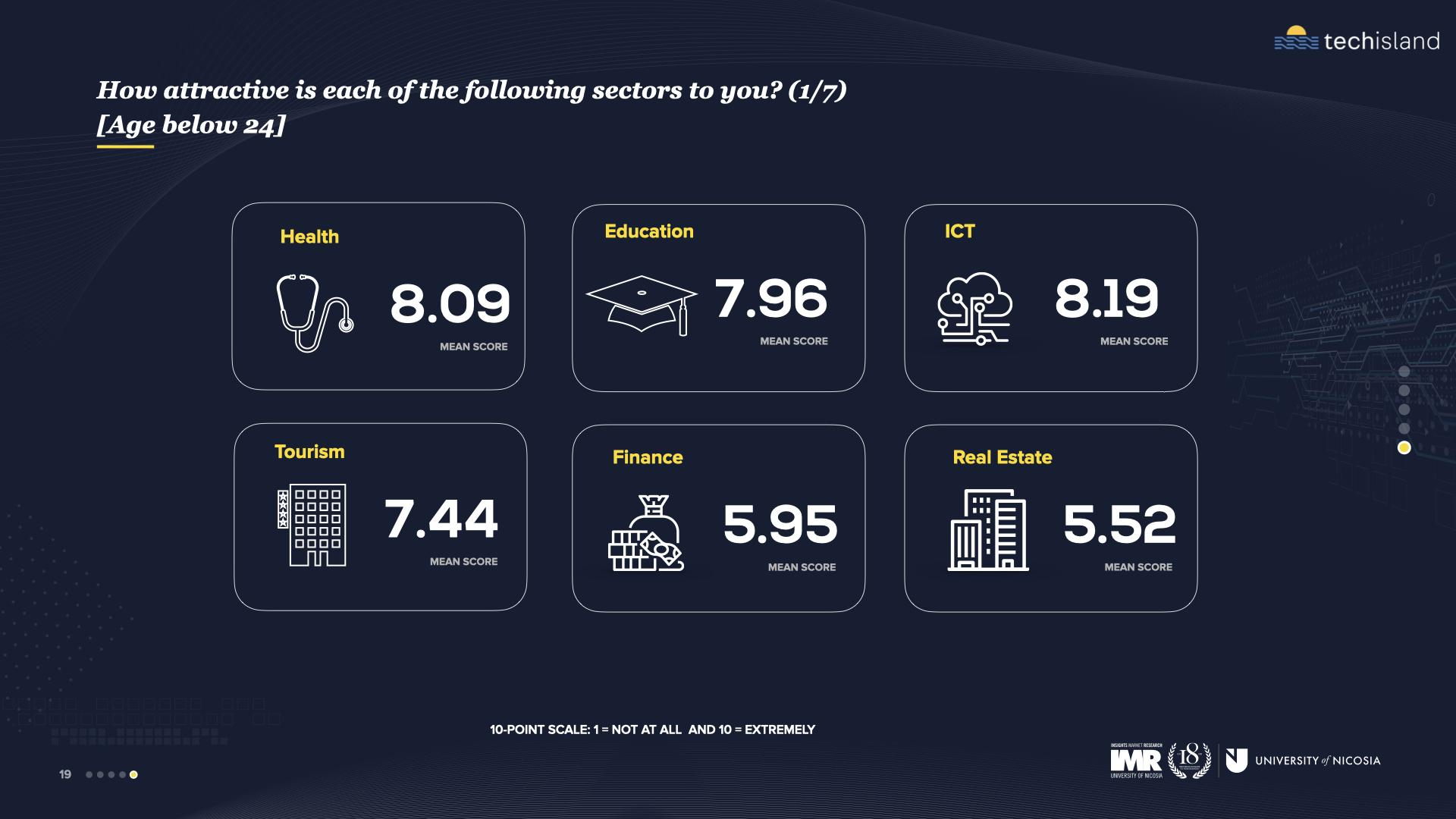 Finally, the results of the survey prove that Cypriots believe the country can attract high-tech companies and talented human resources if and when the government takes additional measures towards this direction, since more needs to be done.

Specifically, when asked whether the steps and actions that have been taken by the state to strengthen the high-tech sector so far are in the right or wrong direction, 51 per cent answered they are in the wrong direction, while, when asked whether the government should take additional measures to strengthen the sector, the vast majority of 95 per cent answered in the affirmative, sending a strong message about the need to invest in the technology sector. 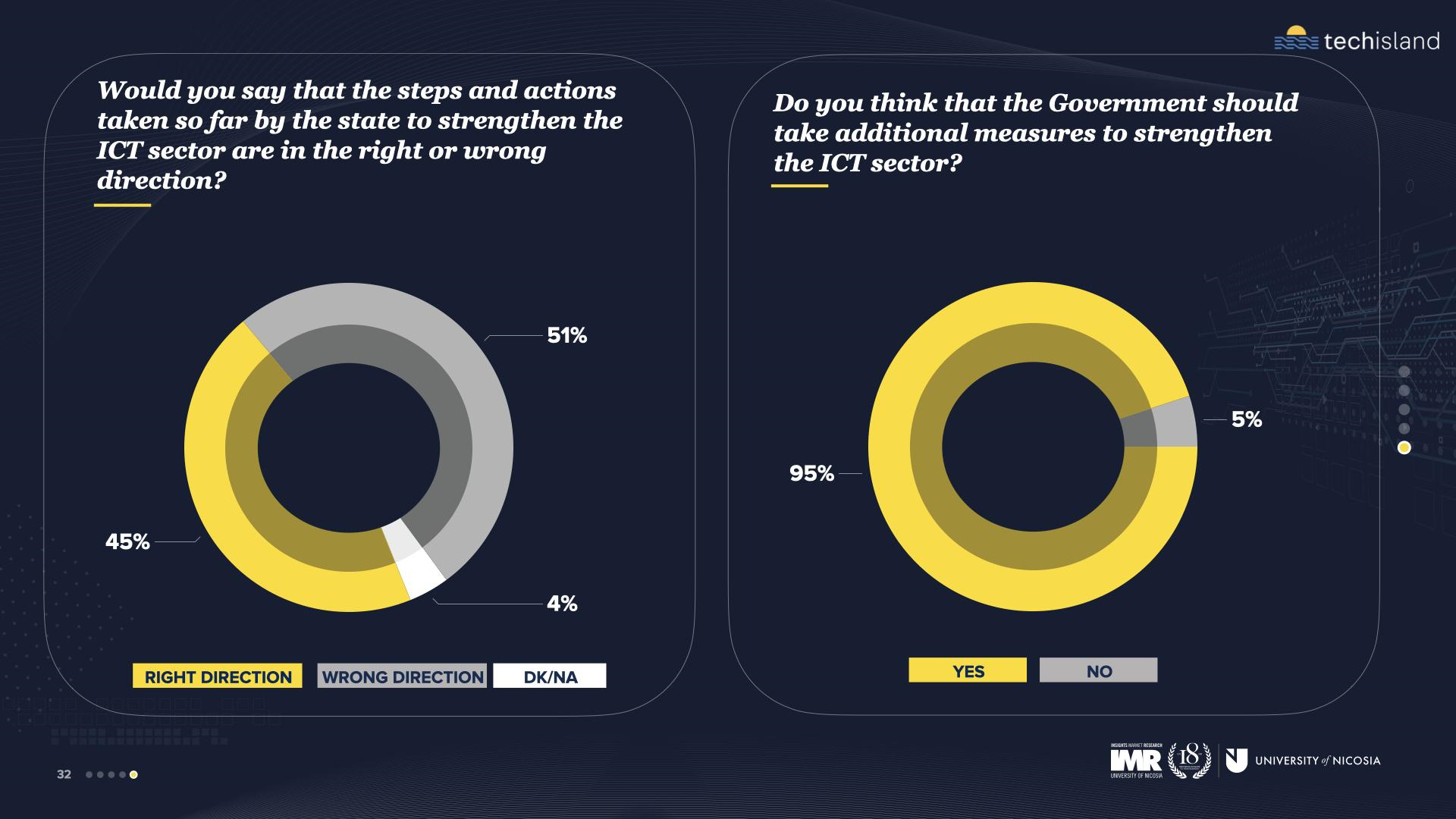 At the same time, it is noteworthy that 71 per cent and 79 per cent of the respondents answered with confidence that Cyprus can attract foreign high-tech companies and talent from this field, stating that facilitating settlement and employment, providing tax incentives and improving licensing procedures were the main areas to focus on. 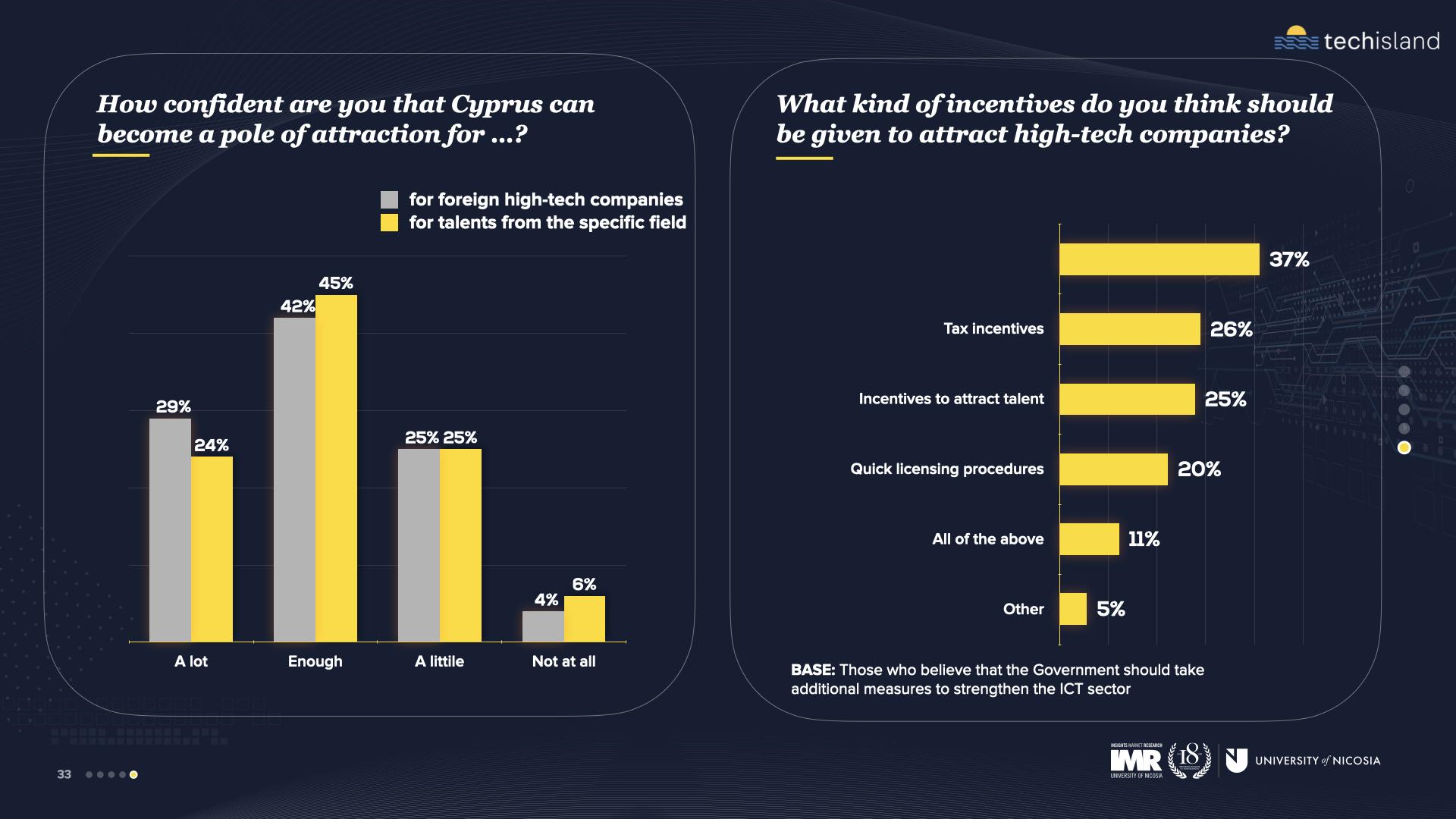