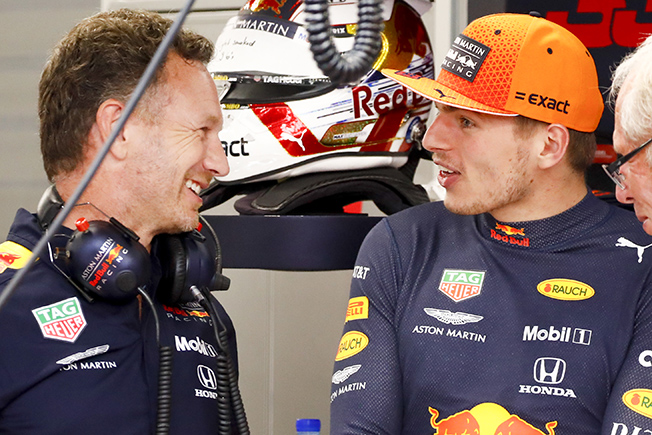 Damon Hill believes Christian Horner’s comments in Qatar prove that “pressure and anxiety” is building ahead of the Formula One title showdown over the next week-and-a-half.

Hamilton roared to a lights-to-flag victory, taking the Mercedes driver to within eight points of Red Bull’s Verstappen with two races to go.

The first of those comes this weekend as F1 visits Saudi Arabia for the first time, taking to the streets of Jeddah.

It remains to be seen if the racing will be more wheel to wheel than in Qatar but, while the grand prix lacked some of the excitement of recent weeks on the track, Horner and his Mercedes counterpart Toto Wolff more than made amends off it.

Horner was hauled up in front of the stewards for comments he made about a trackside marshal, having already verbally jousted with Wolff in a press conference.

He said he had “no relationship” with the Austrian, was not there to “kiss his a**e” and would not be spending Christmas with him – unless Wolff was “in panto this year”.

While Horner got off with an official warning, Hill feels the actions show the “exhausting” nature of being in charge of a team fighting for both the drivers’ and constructors’ championships.

“There’s definitely pressure and anxiety – it is getting so close and so tight,” he said.

“All that hard work and there must have been times this season where they (Red Bull) thought ‘this is doable’ and when you see the gap closing, I wouldn’t say it creates panic in the ranks but it must be exhausting.

“So the stresses are starting to show and the tension between the two team bosses was something I’ve not seen before.

“I mean, it usually took place, probably on phone calls and in Bernie (Ecclestone’s) office years ago or something.

“But to actually put it on display like that in the press conference was a new thing where it was a little bit like watching Britain’s Got Talent wasn’t it.

“It’s publicly probing for the weak-point and the weak spots in people’s persona and that was slightly uncomfortable to watch, but then I suppose it’s understandable.”

Returning to matters on the track, Hamilton is aiming to overhaul Verstappen and become the first eight-time world champion in the history of the sport.

While the Brit may have cantered to the title last season, Verstappen has been more than a match during 2021.

A sparring duo in equally fast cars with strong-willed team bosses has certainly seen interest in F1 pique once again.

“After the the new management moved in there were some doubts as to whether or not they completely understood F1, but I think they’ve shown they understand something.

“This has been a great season, we haven’t had a season like this for a very long time in the points difference between teams over going back over the last 10 years.