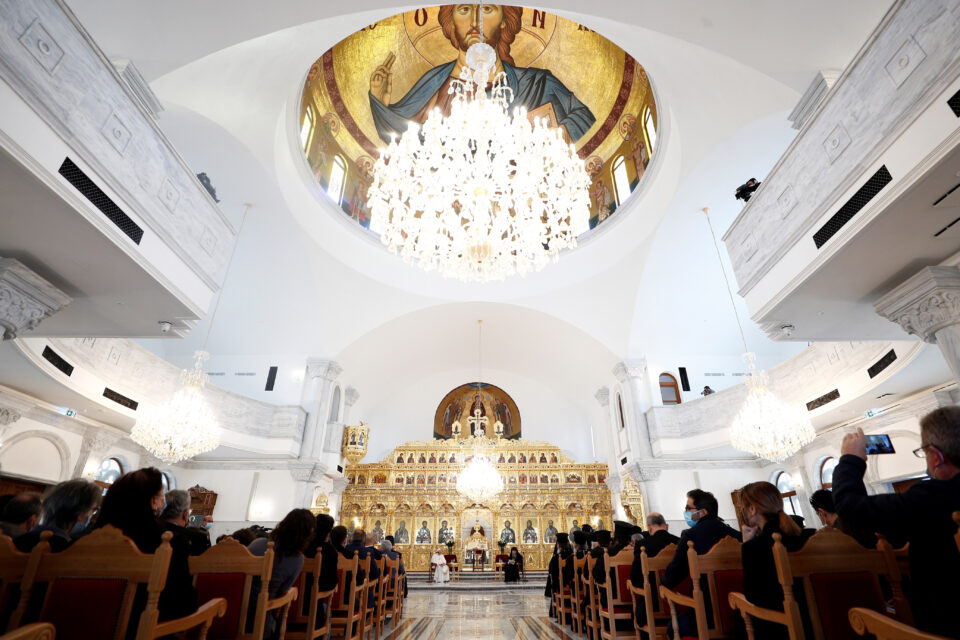 Pope Francis sits next to Archbishop of Cyprus Chrysostomos II during a meeting with the Holy Synod at Apostle Varnavas Cathedral, in Nicosia

Pope Francis on Friday spoke of reconciliation between the Catholic Church and the Orthodox Church during his visit with Archbishop Chrysostomos and the Holy Synod in Nicosia.

“It is my heartfelt hope that there will be increased opportunities for encounter, for coming to know one another better, for eliminating preconceptions and for listening with docility to our respective experiences of faith. This will prove for each of us an exhortation and incentive to do better, and bring a spiritual fruit of consolation,” Francis said.

He said both Churches had a common apostolic origin: St Paul traversed Cyprus and went on to Rome, he said.

“We are thus heirs of the same apostolic zeal, and a single path joins us, that of the Gospel. I like to see us advancing on that same path, seeking ever greater fraternity and full unity.”

He said he was not speaking of what was sacred and helped both Churches encounter the Lord, “but of the risk of absolutising certain customs and habits that do not require uniformity and assent on the part of all” and urged that both not become paralysed by fear of openness or bold gestures, or give in to talk of irreconcilable difference” that have nothing to do with the Gospel.

“Let us not permit the “traditions”, in the plural and with a small “t”, to prevail over “Tradition”, in the singular and with a capital “T”,” he added.

If the Churches set aside abstract concepts and cooperate, for example in works of charity, education and the promotion of human dignity, they would rediscover their fraternity.

“Centuries of division and separation have made us assimilate, even involuntarily, hostility and prejudice with regard to one another, preconceptions often based on scarce and distorted information, and spread by an aggressive and polemical literature. This too makes crooked the path of God, which is straight and directed to concord and unity,” he said.

In his remarks, Archbishop Chrysostomos, after referring to the struggle waged by Cyprus, its Church and its people, for justice in the wake of the Turkish invasion, called on Pope Francis for his assistance in helping to keep safe the island’s cultural heritage as his predecessor had done.
“We also look forward to your help, Your Holiness, to safeguard and respect our cultural heritage and to uphold the timeless values ​​of our Christian culture, which are being brutally violated by Turkey today,” he said.

The Pope left the Archbishopric and headed for the Mass at the GSP stadium in Nicosia where he addressed the faithful. President Nicos Anastasiades also attended the Mass.

Francis on Friday told thousands of Catholics gathered at the GSP stadium in Nicosia that if people remain divided they would never be healed from their blindness.

In purely religious homily, focusing on some of the works of Jesus Christ, Francis said, if each person thinks only of himself or herself, or his or her group, if they do not dialogue and walk together, they will never be completely healed of blindness.

“Often we would rather remain closed in on ourselves, alone in the darkness, feeling sorry for ourselves and content to have sadness as our companion,” he added. “So let us ask ourselves: do I remain wrapped in the darkness of despondency and joylessness, or do I go to Jesus and give my life to him?”.

Each person is blind in some way as a result of sin, Francis said, which prevents them from “seeing” God as the Father and one another as brothers and sisters. “For that is what sin does; it distorts reality: it makes us see God as a tyrant and each other as problems,” he said.

People need to stand by one another to share their pain and face the road ahead together.

“We need enlightened Christians, but above all those who are light-filled, those who can touch the blindness of their brothers and sisters with tender love and with gestures and words of consolation that kindle the light of hope amid the darkness. Christians who can sow the seeds of the Gospel in the parched fields of everyday life and bring warmth to the wastelands of suffering and poverty,” he added.

At the GSP, a large platform was in position where the 7,000 or so congregation, some of whom had come from Lebanon, could have the best view.

People waved flags of Cyprus, the Vatican and Lebanon, among others. Some people wore t-shirts with the photo of the Pope. UN personnel were also there waving their countries’ flags. The choir sang hymns in Greek, English and Italian throughout the mass.

Outside the stadium, giant screens were erected to show the Mass and allow believers who did not manage to secure a ticket to watch.

Police took strict security measures while helicopters were flying over the stadium.
Drawing his Homily to a close, the Pope thanked everyone present for living “with joy” the liberating message of the Gospel, and encouraged them to “keep advancing on this path”.

Hopefully, the above information has clarified things for you. As it was previously mentioned, if you are not sure whether you want to allow the cookies or not, it is usually safer to leave cookies enabled in case it interacts with one of the features you use on our Site. However, if you are still looking for more information, then feel free to contact us via email at [email protected]s-mail.com