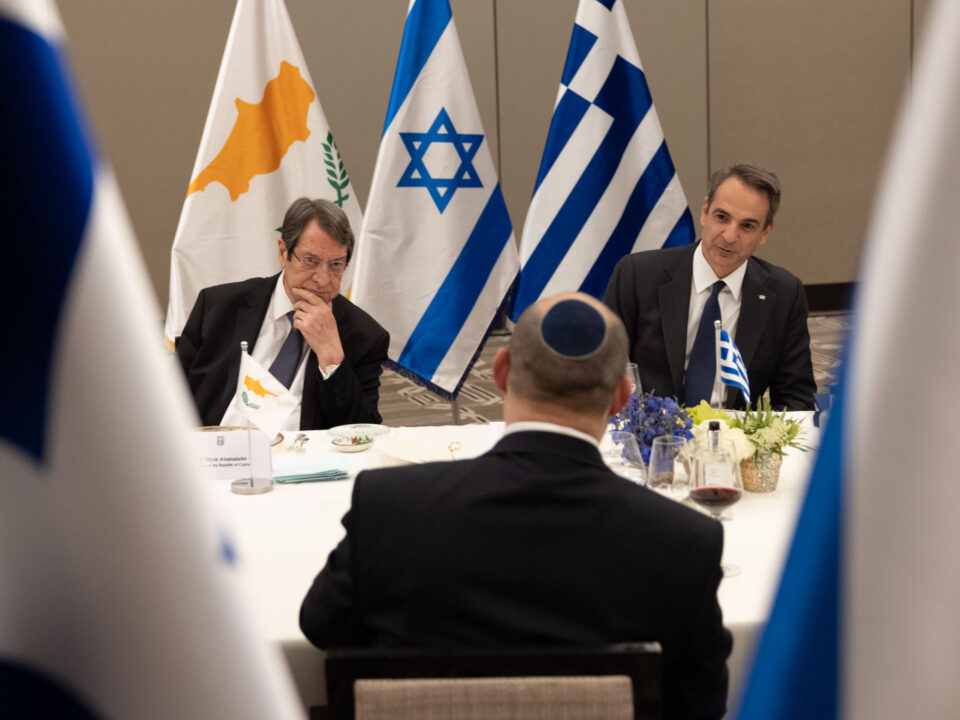 A Cyprus settlement in line with international law and UN Security Council resolutions would significantly contribute to the peace and stability of the region, the leaders of Israel, Cyprus and Greece said on Tuesday following a trilateral summit held in Jerusalem.

President Nicos Anastasiades along with the Prime Ministers of Israel Naftali Bennett and Greece Kyriakos Mitsotakis said in a joint statement they will continue working closely to realise the trilateral’s full potential, to the benefit of their countries and people, and the wider region.

The leaders of the three countries also stressed the importance of respecting the sovereignty and sovereign rights in the Eastern Mediterranean and the Aegean Sea to preserve the stability.

“Trilateral cooperation between Israel, Greece and Cyprus represents a center of joint interests connecting Europe, Eastern Mediterranean and the Middle East,” the Joint declaration read, adding that the three leaders agreed to hold the next summit in Cyprus in the second half of 2022.

On the Cyprus problem, they said they express their full and unwavering support to the ongoing negotiation process, under the UN Good Offices Mission, for a just, comprehensive and viable settlement of the Cyprus problem, based on international law and the relevant UN Security Council resolutions.

“Such a solution, which will reunify the island, based on the respect of democratic principles, human rights and fundamental freedoms of all Cypriots, would not only benefit the people of Cyprus in its entirety, but also significantly contribute to the peace and stability of the region, through Cyprus’ independent foreign policy,”it said.

They also noted that the 3+1 cooperation framework with the US indicates “the importance we attach to the US role in the Eastern Mediterranean” and that they look forward to intensifying their cooperation with the US. This includes planning the participation of the US, at the appropriate political level, at one of their next meetings in line with the letter and spirit of the strong support that the country displays to this partnership.

On energy, and in particular, natural gas and renewable energy, the three countries said this sector could be a solid foundation for cooperation in the region, based on international law, including the law of the sea and the respect of all states to exercise their sovereign rights in their respective EEZ/Continental Shelf.

They noted that EastMed Gas Forum, of which Cyprus will assume presidency on January 1 2022, constitutes a “major opportunity for cooperation and dialogue, for the stakeholders of the region.”

They also acknowledged the importance of regional cooperation in the fields of environmental protection and climate change and expressed willingness to cooperate in the framework of relevant regional initiatives.

In relation to Covid-19, the three countries said they stand committed to offer mutual assistance to overcome the consequences of the pandemic and strengthen their cooperation in this field.