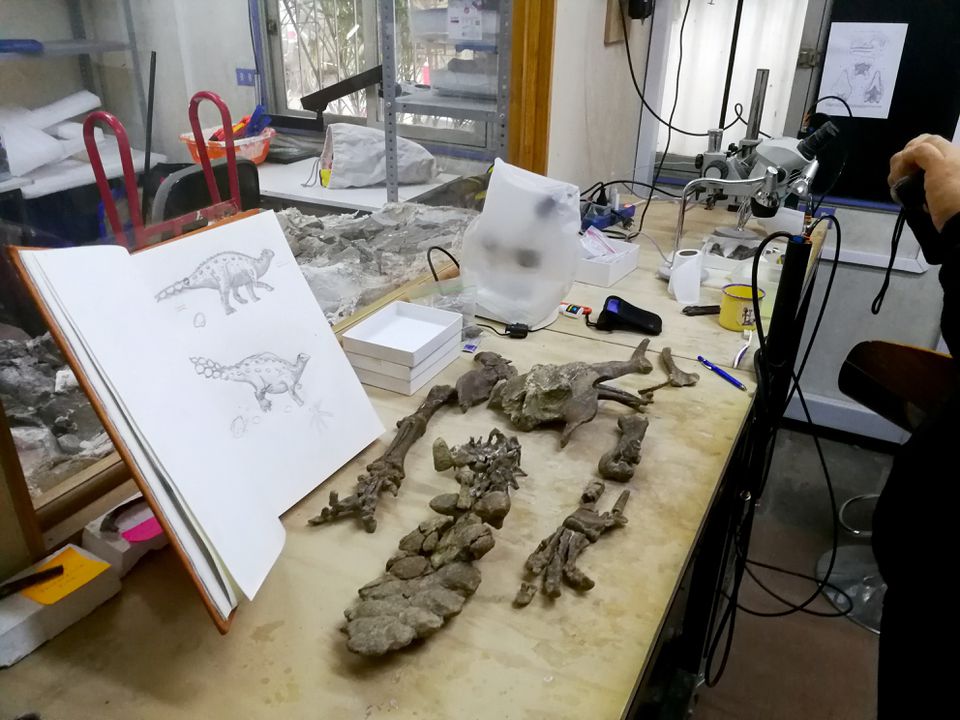 More than half a millennium ago, Aztec warriors brandished a weapon called a macuahuitl, a wooden club with jagged obsidian blades embedded on its sides, to inflict gruesome wounds on enemies in close combat.

A newly identified armoured dinosaur that inhabited the Patagonian region of Chile did much the same thing to ward off predators about 74 million years ago with a tail resembling a macuahuitl, scientists said on Wednesday.

The four-legged plant-eating creature, named Stegouros elengassen, exemplifies the arms race that unfolded during the age of dinosaurs to acquire new traits to survive in a perilous world. It also sheds light on the evolution of a highly successful group of tank-like dinosaurs called ankylosaurs.

Stegouros lived in what is now South America’s southernmost tip during the Cretaceous Period in the twilight of the dinosaur era. It was small relative to other armoured dinosaurs, at about 7 feet (2 meters) long. Stegouros possessed a beak-like mouth for cropping plants. Its back and sides were studded with bony structures called osteoderms that served as a coat of armour.

Its tail is utterly unique among dinosaurs. It is relatively short with fewer vertebrae than other armoured dinosaurs. The tail’s back half is covered by a frond-like structure composed of seven pairs of flattened fused bony elements with craggy edges sticking outward.

“For now, we can only imagine how might Stegouros have used this weapon – and tail-swinging side to side as self-defence mechanism is a good guess,” said vertebrate paleontologist Sergio Soto, a University of Chile doctoral student and lead author of the study published in the journal Nature.

“The macuahuitl was an Aztec war club used in close combat by Aztec warriors, probably in a similar way to a sword, causing massive damage to the opponent. The tail weapon of Stegouros roughly resembles a macuahuitl,” study co-author and University of Chile vertebrate paleontologist Alexander Vargas added.

Stegouros was smaller than ankylosaurs from the northern hemisphere such as Ankylosaurus, which reached 26 feet (8 meters) long. Ankylosaurs, some possessing blunt bony clubs at the end of their tails, are closely related to an earlier group of armoured dinosaurs called stegosaurs whose tail weaponry came in the form of a structure of paired spikes called a thagomizer.

The tail of Stegouros differed from both.

While northern hemisphere ankylosaurs are well understood based on numerous fossils, the anatomy of those from the southern hemisphere had remained mysterious owing to remains that are either fragmentary or not yet thoroughly studied.