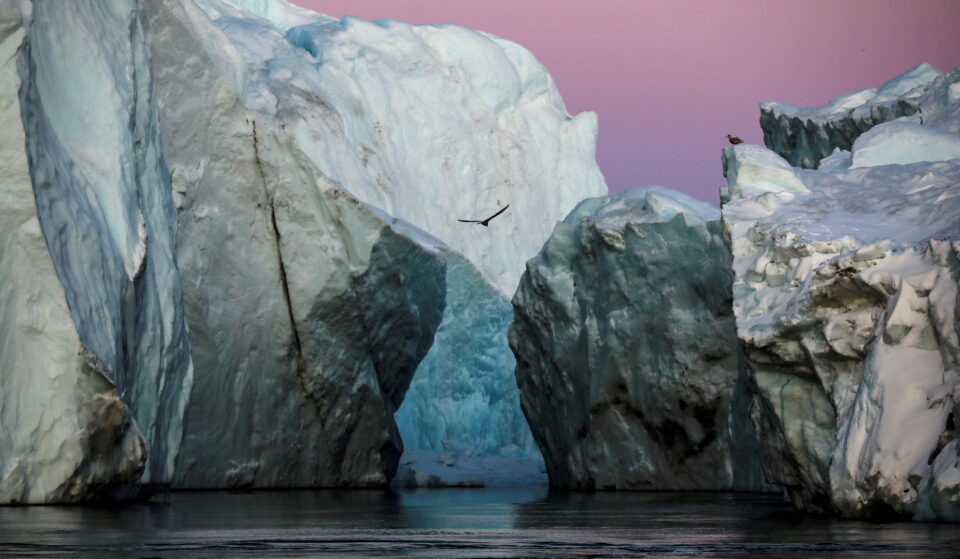 Before the end of this century, most of the Arctic will for the first time receive more rain than snow across a whole year. That’s one of the key findings of a new study on precipitation in the Arctic which has major implications – not just for the polar region, but for the whole world.

While a reduction in frozen ocean surface is one of the most widely recognised impacts of Arctic warming, it has also long been anticipated that a warmer Arctic will be a wetter one too, with more intense cycling of water between land, atmosphere and ocean. The shift from a frozen region towards a warmer, wetter Arctic is driven by the capacity of a warmer atmosphere to hold more moisture, by increased rates of evaporation from ice-free oceans, and by the jet stream relaxing.

The Arctic water cycle is expected to shift from a snow-dominated one towards a rain-dominated one during the 21st century, although the timing of this is uncertain. Now, a team of scientists have published a study in the journal Nature Communications which suggests that this shift will occur earlier than previously projected. The effect will be particularly strong in autumn, with most of the Arctic Ocean, Siberia and the Canadian Archipelago becoming rain-dominated by the 2070s instead of the 2090s.

Such a profound change to the Arctic water cycle will inevitably affect ecosystems on land and in the ocean. You might intuitively expect that a warmer and wetter Arctic would be very favourable for ecosystems – rainforests have many more species than tundra, after all. But the plants and animals of the Arctic have evolved for cold conditions over millions of years, and their relatively simple food web is vulnerable to disturbance.

For example, warmer temperatures can cause larval insects to emerge earlier, before the fish species that feed upon them have hatched. More rainfall means more nutrients washed into rivers, which should benefit the microscopic plants at the base of the food chain.

However, this also makes rivers and coastal waters more murky, blocking light needed for photosynthesis and potentially clogging filter-feeding animals, including some whales or sharks. Brackish water typically supports fewer species than either freshwater or seawater, so increasing flows of freshwater offshore may well reduce the range of animals and plants along Arctic coasts.

Further into the Arctic Ocean, there are more reasons to doubt the potential benefits of warmer temperatures and greater freshwater circulation. The dissolved constituents of rainfall, river water and melting snow and ice reduce the alkalinity of Arctic surface waters, which makes it harder for marine organisms to build shells and skeletons, and limits chemical neutralisation of the acidifying effects of CO₂ absorbed in seawater.

At the same time, rivers flowing through degrading permafrost will wash organic material into the sea that bacteria can convert to CO₂, making the ocean more acidic. Fresh water also essentially floats on denser seawater.

This causes the ocean to become stratified, impeding exchanges of nutrients and organisms between the deep sea and the surface, and restricting biological activity. Therefore the likely impacts of a warmer, wetter Arctic on food webs, biodiversity and food security are uncertain, but are unlikely to be uniformly positive.

Arctic change is decades ahead of global averages

Temperature increases in the Arctic have raced ahead of the global average. This will only be reinforced as snowfall is reduced and rainfall increases, since snow reflects the sun’s energy back into space. As the land becomes less snowy and less reflective, bare ground will absorb more solar energy, and thus will warm up. The Arctic is set to continue warming faster than elsewhere, further diminishing the difference in temperature between the warmest and coldest parts of the planet, with complex implications for the oceans and atmosphere.

The recent COP26 climate summit in Glasgow focused on efforts to “keep 1.5°C alive”. It is worth remembering that the 1.5°C figure is a global average, and that the Arctic will warm by at least twice as much as this, even for modest projections.

The new study underscores the importance of the global 1.5°C target for the Arctic. For instance, at that level of warming Greenland is expected to transition to a rainfall-dominated climate for most of the year. While at 3°C warming, which is close to the current pathway based on existing policies rather than pledges, most regions of the Arctic will transition to a rainfall-dominated climate before the end of the 21st-century.

It’s research that adds further weight to calls for improved monitoring of Arctic hydrological systems and to the growing awareness of the considerable impacts of even small increments of atmospheric warming.

Coronavirus: Further tests will be done after post-mortem on woman with Covid who died at home (Updated)