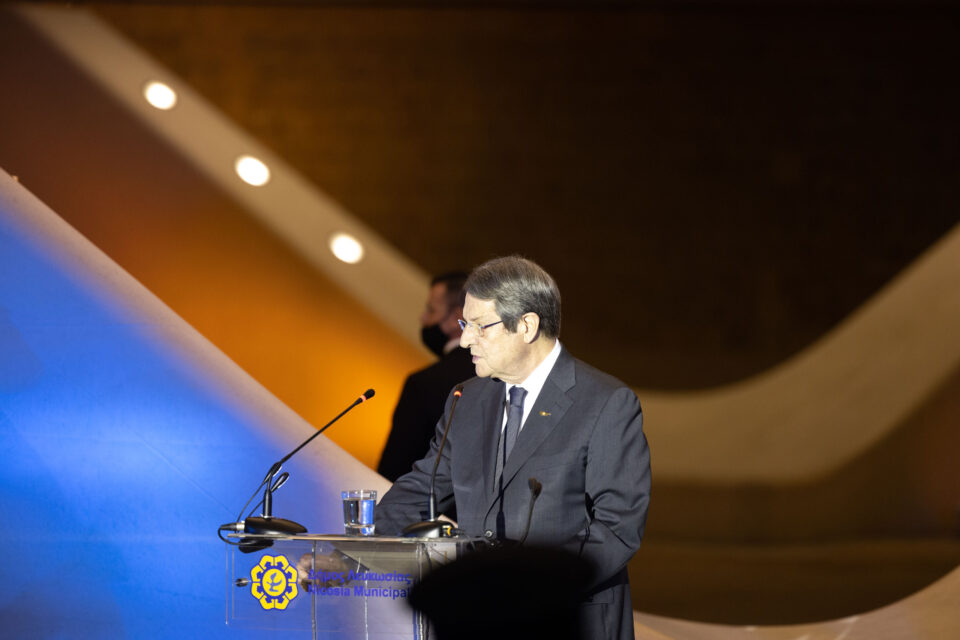 The centre of Nicosia is being transformed from a place of decline to a catalyst for growth, President Nicos Anastasiades said on Friday during the inauguration of the redeveloped Eleftheria Square, finally completed almost 16 years after the process began.

“Today we inaugurate an emblematic work, designed by one of the top architects of the 21st century,” mayor Constantinos Yiorkadjis said, “that will help the square take on the importance it deserves as the central square of a European capital”.

Referring to the delays leading to its completion, he said that it was a highly complex project with very high specifications and requirements in terms of construction quality. “Innovative projects are needed to introduce new knowledge to our island and help it become more efficient and competitive,” he said. “Because it is through difficulties that we move forward and improve”.

He expressed the municipality’s determination to breathe new life into Nicosia, saying that “today we deserve to be happy and proud of our city”.

Apart from being an important project in the upgrading of the capital, the president said in his own address, the square will also be “a special reference point, following the example of other European cities”.

Anastasiades added that the square, which has played a central role in pivotal moments in the Republic’s history, connects old Nicosia and its unique historical elements, to its commercial urban centre, “once more becoming a meeting place for local and foreign visitors”.

The vision for a significantly upgraded and reborn city centre comes with a series of similar projects aiming to make Nicosia more competitive, attractive, sustainable and citizen-friendly, he added.

These include the regeneration of important commercial streets such as Stasikratous, Mnasiadou, Rigenis, Theophanous and Zenas Kanther, as well as Omirou, Kallipoleos, Kennedy and Kyriakou Matsi avenues.

Makarios Avenue joined the list just this Wednesday, when it officially reopened to the public after years of works and traffic disruptions.

The president acknowledged the problems these works have caused local residents and businesses, stressing that the annoyance will be replaced with “significant benefits on an economic, commercial, touristic and political level, both short and long-term”.

He added that he was pleased to see increased traffic in the area thanks to strong activity both on a residential and entrepreneurial level, “through the construction of new hotels and residential buildings, the opening of new venues and businesses in all sectors”.

“I hope that soon, Eleftheria Square, as its name [liberty] suggests, will become a reunification point for our homeland. I wish progress for Nicosia, for Cyprus – our common homeland”.

EU Health Commissioner Stella Kyriakides, who also addressed the audience, expressed similar sentiments, saying that Eleftheria Square has always been a landmark for the whole of Cyprus.

“The renewed square aims to marry centuries long past with the present and the future,” she said, expressing the hope that it can be a place where the island reunites “in conditions of security, development and prosperity”.

Eleftheria Square, she said, will reassume its important role and its historic course through its significant contribution to the socioeconomic development of Nicosia.

Kyriakides also said she looks forward to the day when it becomes possible for locals and visitors to enjoy the square “with one another, without the need for social distancing”.

“It will stand out as a melting pot of people, culture, and civilisation”.

For his part, on behalf of the architects of the project, Christos Passas thanked the municipality for trusting them with the project, wishing for Eleftheria Square to become a meeting place for all people in a free Cyprus.

Our View: If banks want to reduce costs they should act on it