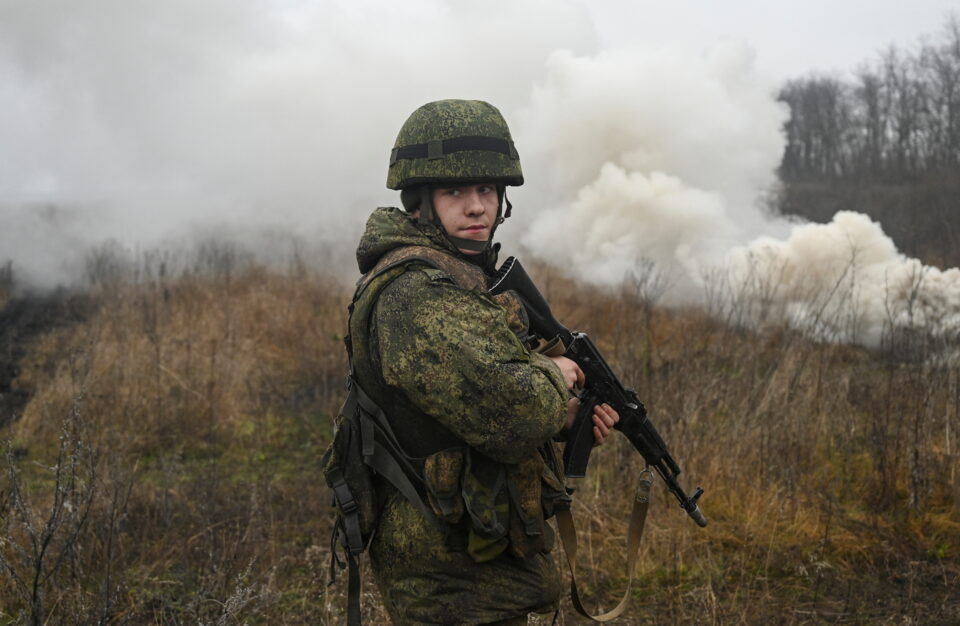 I must admit that I googled the plot of the 1997 film ‘Wag the Dog’ before starting to write this. It’s a dark comedy about a US president facing a sex scandal whose staff invent a completely fictional war in the Balkans to draw the media’s attention elsewhere. But sex scandals are not the Biden administration’s style.

Yet there is certainly something weird going on. In only two weeks a full-scale panic about Russia invading Ukraine has been sold to the Western media, and normally sensible journalists and analysts are talking about war – with Russia, of all places.

All right, if you read the small print they are really saying that the Russians are going to invade Ukraine and that the United States and its Nato allies WON’T fight to stop them. Ukraine is not part of Nato and they’ll sadly have to watch it go under. But they’ll be very, very cross, and they’ll sanction the hell out of Russia. So there!

This story about Russian forces massing on Ukraine’s borders for an invasion first emerged from US intelligence circles in mid-November. Ukraine’s President Volodymyr Zelensky realised that it could mean more American arms for Ukraine, and soon he and his people were singing from the same song-sheet.

Satellite images of Russian tank parks and barracks were distributed. Reports of Russian military units moving from Siberia to western Russia were whispered in the ears of favoured correspondents. Few Western journalists remembered how partial and distorted this sort of ‘information’ was during the Cold War, so most of them uncritically repeated it.

The 92,000 Russian troops that are allegedly now near the Ukrainian border is really not a very impressive a number, given that the Ukrainian army is 255,000 strong, but the same US intelligence sources say the Russians plan to raise the number on Ukraine’s border to 175,000 troops in January and go for broke. How do they know that? Sorry, it’s a secret.

Stop focusing on the troop numbers. If an invasion were really scheduled for January, the forces could be anywhere in Russia’s vast expanse right now and still show up in time for the party next month. Any extra Russian troops ‘near’ Ukraine now are there as a symbolic gesture, not as part of a military plan.

Symbolism and historical stereotypes are what this is all about, and the dominant stereotype in Putin’s mind is the fact that practically everybody on the ‘A’ list of would-be world conquerors has invaded Russia, from the Golden Horde (Mongols) to Napoleon to Hitler. That sort of thing is bound to leave a mark.

Putin, like any educated Russian, therefore feels uneasy about the way that Nato has crept closer and closer to Russia. The military frontier with Nato was a ‘safe’ 1,500 km. west of Moscow during the Cold War, but afterwards it moved.

When some of the former Soviet ‘satellites’ in eastern Europe joined Nato in 1999, that brought Nato forces to within 800 km. of Russia’s western frontier. Then the western-backed non-violent overthrow of Ukraine’s pro-Russian president for a second time in 2014 created the possibility that Ukraine itself might also join Nato.

Moscow is only a six-hour drive up highway E101 from Ukraine’s northern border (although tanks would take a little longer). Nato has been alert enough to Russian sensitivity on this topic not to invite Ukraine to join, but the prospect does weigh heavily on Putin’s mind.

So Putin wants a written promise that Ukraine will never join the Western alliance. Nato countries would never allow it anyway, precisely because there is some risk that it could drag them into a war with Russia, but Biden is unwilling to put it in writing.

Why not? Because he spent the first half of his life in the Cold War, and his attitudes are still shaped by the propaganda of that time. Biden sees Russia as an ‘expansionist’ power that must be ‘contained’. It must never be ‘appeased’, because that was what let Hitler get started. Bad historical analogies are dangerous things.

Both men are of an age where a fundamental change of mind is unlikely. On the other hand, as veterans of the Cold War they both understand that Russia and the United States must never do anything that risks bringing them into a direct military conflict.

That is the best possible guarantee that this nonsense  will not end badly. If you want another, it is that the Western sanctions which would follow really would cripple the Russian economy. They might even undermine Putin’s still significant popularity in Russia itself. There may be all kinds of threatening gestures, but Russia will not invade Ukraine.

Gwynne Dyer’s new book is ‘The Shortest History of War’.

Minister and Disy leader squaring up for top prize

Get to know about some excellent bitcoin trading strategies that will earn you high profits!