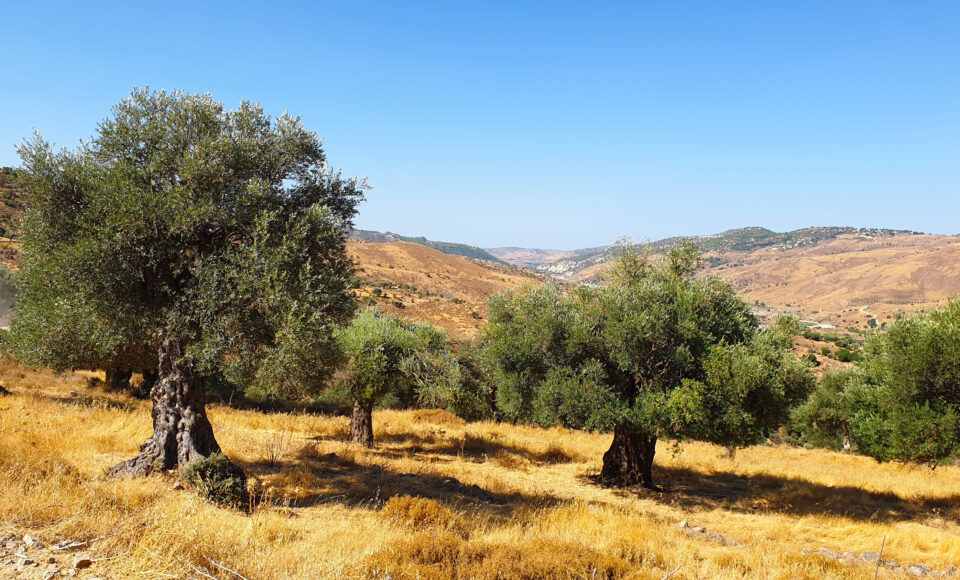 The village of Salamiou is a living museum that presents a rich historical and ecological past, offering an exceptional natural observatory of the Troodos region. The encompassing mountains provide a stunning backdrop for the contrasting red roofs and pale stone of the village houses, elevating this place as one of the most picturesque in the Paphos region. From cobblestone narrow streets and energetic nature to vineyards, olive groves and traditional cuisine, the atmosphere of Salamiou village will appeal to everyone.

Home of the homonymous festival of ‘palouzes’ – a traditional Cypriot dessert made from grape juice, and of the Countryside Animafest Cyprus, the village has become known around the world for hosting and supporting traditional and international artistic events.

Upon entering Salamiou, one will encounter a gentle hilltop charged with a powerful religious symbol that began construction in 1902. Located on the outskirts of the village, the Monastery of Panayia Salamiotissa is a real architectural feat, housing an ancient icon of the Virgin Mary that dates to the 16th century.

Further afield, the Salamiou Environmental Education Centre was established to create awareness of the flora and fauna of the region. The area also attracts great environmental interest, since Salamiou is considered a passage for migratory birds travelling during the spring and winter periods.

However, there is more to Salamiou than meets the eye. Amid the exceptional climate and scenery, and its commitment to using sustainable practices that conserve the natural resources of the area such as honey, almonds, herbs, grapes, and olives, the western slopes of the village are dotted with monumental olive trees that are a testament to Cyprus’ religious heritage.

Symbols of immortality, peace, and reconciliation, Salamiou’s ‘apostolic olive trees’ bear the fingerprints of history. Estimated to be two thousand years old, the trees’ boles have been chiselled by time, and, despite their age, remain alive, fructifying until today.

According to tradition, the Apostles Paul and Varnavas passed through the village of Salamiou enroute to Paphos during their first missionary tour of Cyprus in 45 AD. It is believed that the apostles stopped at the village and had lunch there. The pips of the olives they ate and threw away grew into olive trees. Considered to be both sacred and natural works of art, these olive trees have certain characteristics that make them unique.

Unlike other perennial olive trees in Cyprus, the branches of the apostolic trees tend to grow more upwards than outwards, their fruit is larger than most – almond-shaped and juicy with an extraordinary, rich fruity flavour when ripe. Processed in a nearby mill, the exceptional olives produced by these trees deliver large quantities of excellent oil that is highly appreciated by the locals.

An ambitious project known as ‘Terract’ was launched five years ago to preserve the rare and endangered ancient olive breeds of Salamiou. Combined with the art of dry-stone walling – an initiative of Cyprus and seven other countries (Croatia, France, Greece, Italy, Slovenia, Spain and Switzerland) that has been registered on Unesco’s representative list of the intangible cultural heritage of humanity, Terract seeks to educate locals and tourists to become actively involved in preserving Salamiou’s plant heritage.

“It is all about active participation versus passive tourism,” says Vas Petropoulou Panayiotou, founder of Terract. “Through the initiative, we encourage visitors to get involved in village life with agriculture and food production, living and interacting with the local community, promoting religious tourism, and help build a dry-stone wall to protect the ancient olive trees.”

According to Panayiotou, dry-stone walling plays a vital role in the prevention of avalanches, floods, combating land erosion and desertification, improving biodiversity, and creating the best microclimatic conditions for agriculture.

“When people hear the word conservation, they think of rare or endangered species,” Panayiotou told the Sunday Mail. “However, the process to preserve our natural heritage, especially the 2,000-year-old olive trees that have survived until today, is more overarching.”

Panayiotou has reached out to various organisations in Cyprus to take inventory on Salamiou’s apostolic trees, and continues to raise awareness of their importance and preservation through numerous fund-raising initiatives.

“Although the trees are located on private land, we have acquired permission from the landowners who have recognised their significance. Our aim is for the government to officially recognise these trees as part of Salamiou and the island’s cultural heritage.”

The village is an unspoiled hinterland steeped in timeless tradition. Here, one will unearth the quiet rhythms of country life, religious heritage, environmental tourism and traditional customs. A trip to this magnificent corner of Cyprus offers the chance to walk in the footsteps of the apostles, help build a dry-stone wall and savour the fruits of the sacred olive trees of Salamiou.

Energy: the risks of success