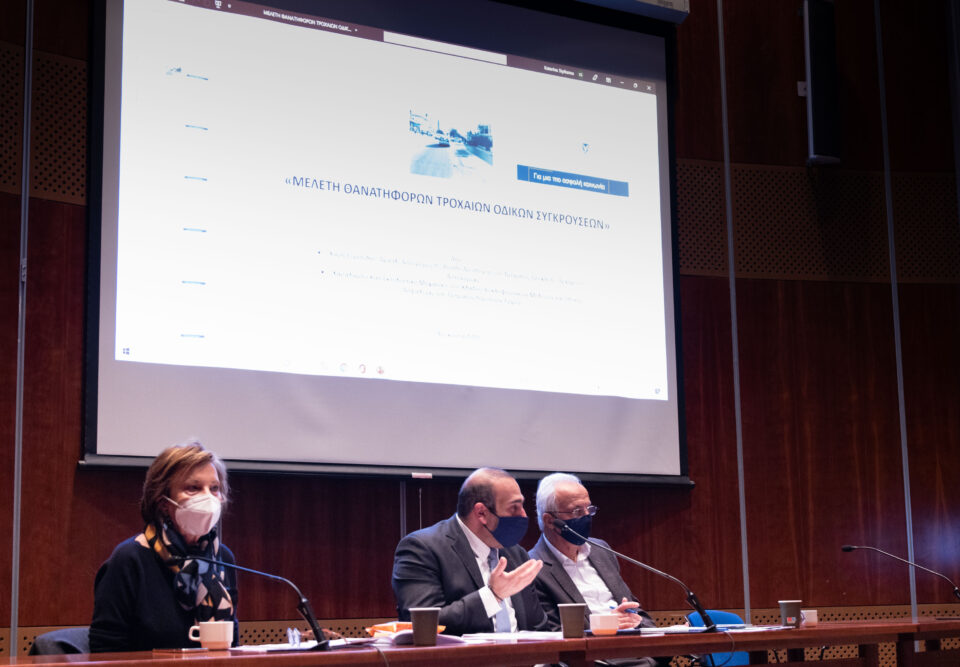 Meeting of the Road Safety Council

Transport Minister Yiannis Karousos on Monday chaired a meeting of the Road Safety Council focused on actions to stem the bloodshed on the roads —  a day after two road fatalities in Paphos.

Forty-four people have lost their lives in 43 road accidents so far this year, including 14 motorcyclists and six pedestrians.

Two of the road fatalities occurred in the Paphos district on Sunday. Androula Papachristoforou, 60, died after a hit-and-run as she attempted to cross Priamou street in Paphos at around 9.15 pm.

Earlier on Sunday, Chris Simmons, a 26-year-old Briton permanent resident of Cyprus was killed when his car went off the road, crashed into a tree and rolled over several times before coming to a stop in a field on Ayios Georgios Avenue in Peyia.

Monday’s meeting, attended also by Justice Minister Stefi Dracou, police officials and representatives of the education ministry, was a scheduled session of the Road Safety Council to review implementation of a strategic road safety plan.

In statements to the media, Karousos said his ministry was taking action to promote better behaviour on Cyprus’ roads, aiming to reduce accidents and deaths to a minimum.

“We are promoting a series of policies that will provide citizens with available means to ensure their protection,” he said.

“We have dynamically and decisively begun the implementation of the Strategic Plan for Road Safety for the period 2021-2030.

“Of the 158 action plans mentioned in it, 70 have already been Implemented in 2021, corresponding to 44 per cent of the total.

“The most important tool at our disposal is the traffic camera system, which has been implemented on a pilot basis on our roads on October 25. The duration of the pilot phase is three months. Eight cameras are being utilised at the moment, four fixed and four mobile. Once the system is in full swing, it will feature a total of 90 fixed cameras in 30 locations nationwide, as well as 20 mobile cameras,” Karousos said.

Data collected from the pilot phase shows that citizens are familiarising with the system, as violations have significantly decreased, according to Karousos.

“Throughout the first week, an average of 804 violations per day were recorded by the cameras, with the number decreasing to 703 the following week and to 423 the one after,” he said.

The minister also added that accidents and deaths concerning motorcyclists are being carefully examined.

According to data collected from the EU-led ETSC Road Safety Performance Index (PIN), a policy tool to help EU Member States improve road safety, from 2018 to 2020 Cyprus recorded the highest death rate of motorcyclists involved in accidents who did not wear a helmet in the entire bloc.

“This is the reason why we have to act quickly, and I have personally met with organised groups of motorcyclists to listen to their concerns and suggestions on the issue,” Karousos said.

In this context, specific amendments to the driving licence law as regards motorbikes have been prepared. The first would introduce an expiry date to the learner’s driving licence, which will cease to be valid two years after being issued, in order to reduce the number of young drivers riding powerful motorcycles without a regular permit.

The second will prevent the holder of a learner’s motorbike driving licence from circulating on public roads without being accompanied by an official instructor.

Moreover, people driving bikes without their licence confirming they are allowed to do so will be criminally prosecuted. Driving schools will also be upgraded and moderninsed.

Karousos also added that in 2022 new plans regarding cyclists and pedestrians will be implemented.

“With the Christmas holidays fast approaching, we cannot afford to lose other lives on our streets. This year let’s all reach our destinations and our loved ones safely,” the Transport Minister concluded.