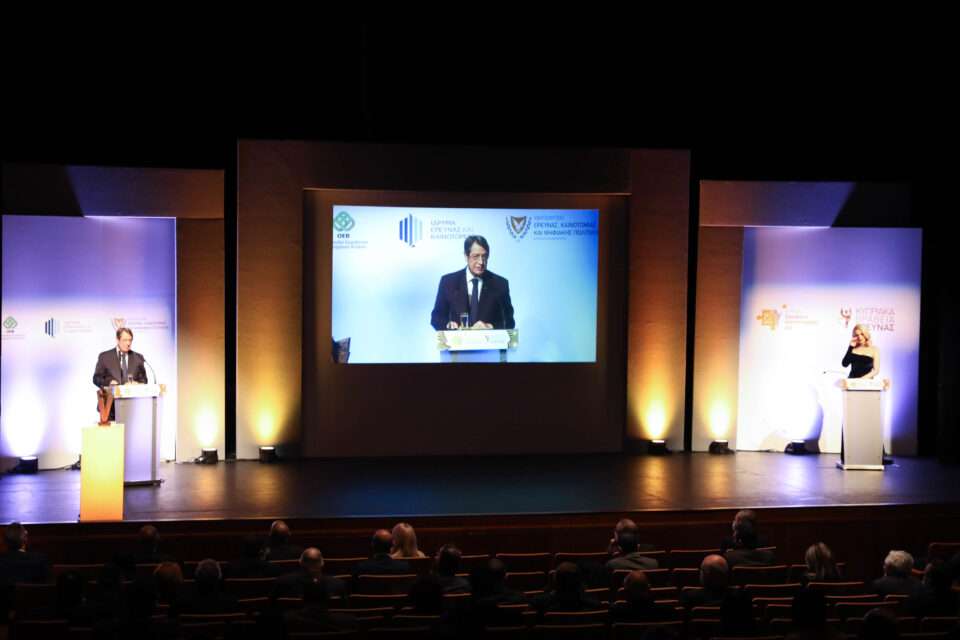 Cyprus ranks first in Europe among countries that secured funding for the creation of Research Centres of Excellence, while it has recorded one of the largest absorptions of projects from Horizon 2020, President Nikos Anastasiades said on Monday.

He was addressing the award ceremony of the Innovation and Research Awards of the employers & industrialists federation (Oeb).

The president expressed the government’s will and determination to utilise research, innovation and technology, with the aim of creating a modern, sustainable and flexible state.

He said Cyprus secured funding for the creation of Research Centres of Excellence, under the Teaming for Excellence programme.

Members of the academic, research and business community of Cyprus, he added, managed to raise funding of over €317m during the period 2014-2020, returning three times the country’s national contribution to the EU.

He also said that under the research and innovation foundations’ business innovation programmes, 85 Cypriot companies, including 60 start-ups, secured funding of over €20m and invested €9m of their own funds, contributing to the growth of private investment and development.

As a result, nearly 200 new jobs have been created in cutting-edge sectors, he added.

He also said that start-ups selected through this process managed to secure high-risk funds, more than €12m, proving their international competitiveness.

Anastasiades also said that within the framework of the national financing programme for research and innovation, RESTART 2016-2020, 724 projects were financed with an investment of €130m. The completion of these projects is expected to create 1,250 new jobs and strengthen more than 500 companies, he added.

He said that the government’s main concern was and remains the creation of further prospects that will allow scientists to develop their creative ideas and initiatives and gain professional recognition in their own country with long-term and substantive benefit for themselves, but also the economy and society.

The government, he said, invests in the cooperation between the business and academic world of Cyprus, which, he added, was key for the transfer of knowledge to the conversion of research results into innovative products and services of added value.

President refuses to confirm his position over aides