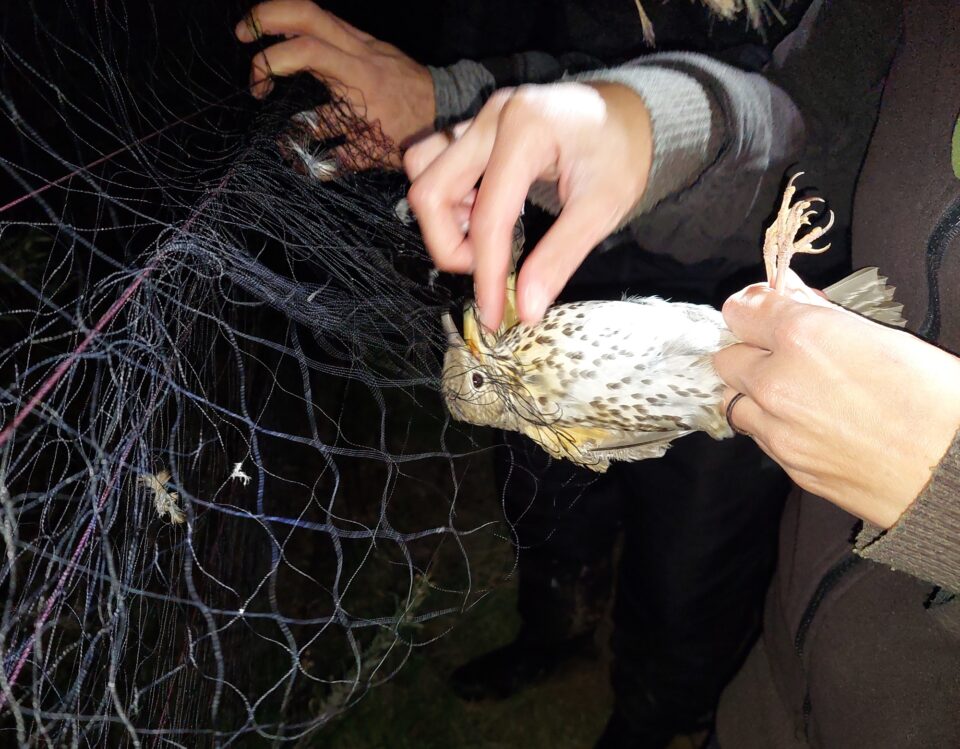 One of the trapped birds being released from the net (Cabs)

Two men, aged 41 and 51 have been arrested in connection with a case of illegal trapping and killing of wild birds in Zygi, following a complaint by anti-trapping activists.

The two were charged and released and are expected to appear before the Larnaca court.

According to police, a woman reported to the Zygi police that a man was attempting to trap wild birds in the area.

Police went to the scene and found two activists watching a man trying to trap the birds with nets.

Another man then arrived there who allegedly tried to intimidate the officer physically. This was the 51-year-old who then left with the other man.

Police issued arrest warrants for the pair and a search warrant for their homes and premises.

Earlier Monday, anti-bird trapping activists Cabs said one of their volunteers was assaulted by a poacher on Christmas Eve during a campaign to prevent trapping in the Zygi area.

The poacher’s ‘boss’, they said also came to the scene and “manhandled” a police officer who had been called by Cabs.

Cabs said their winter campaign started five days ago “and already the volunteers have suffered the first violent aggression in Zygi”.

During the night of December 24, they said their team discovered an active and largescale trapping site on the river mouth east of Zygi harbour.

They said they reported immediately to the Game and Fauna Service, “but since the wardens were not available for the second night in a row, the team had to call the Zygi police for help and were escorted to the spot”.

Cabs said the trapping site was equipped with six huge nets and a tape lure. Six song thrushes and a barn owl were caught in the net, with 23 more dead in a bucket, freshly killed by the trapper.

“Despite the suspect attempting to flee on foot, he was stopped by the police patrol close to the harbour,” Cabs said.

“However, the trapper had already called for back-up and both Cabs team and the police patrol were confronted by two individuals, one of whom did not refrain from challenging the police unit, even manhandling one agent by the uniform’s collar and pulling him around, while unleashing a torrent of death threats to everybody,” an announcement added.

“When our volunteer intervened to try to stop the individual and to shield the police officer, he was punched in the face. The Cabs member was subsequently taken to the hospital for possible damage to the ear membrane.”

Alexander Heyd, Cabs General Director stated: “We do not blame the agents who have done their best given the circumstances, but we do blame the Head of Cyprus Police who dissolved and dismantled the former specialist Anti-Poaching Unit, thereby sending a message to the trappers that they can have free reign and some of them can also abuse police agents”.

Heyd added “Cabs volunteers have been repeatedly received death threats from this trapper and will now file a complaint against him for violence and abusive behaviour, but once again for the third year in a row we urge the Cypriot authorities to stop once and for all this criminal individual who kills around 35,000 birds every year with impunity”.

Cabs plans to report “this unsustainable violence” suffered by their volunteers to the relevant embassies and the European Commission.