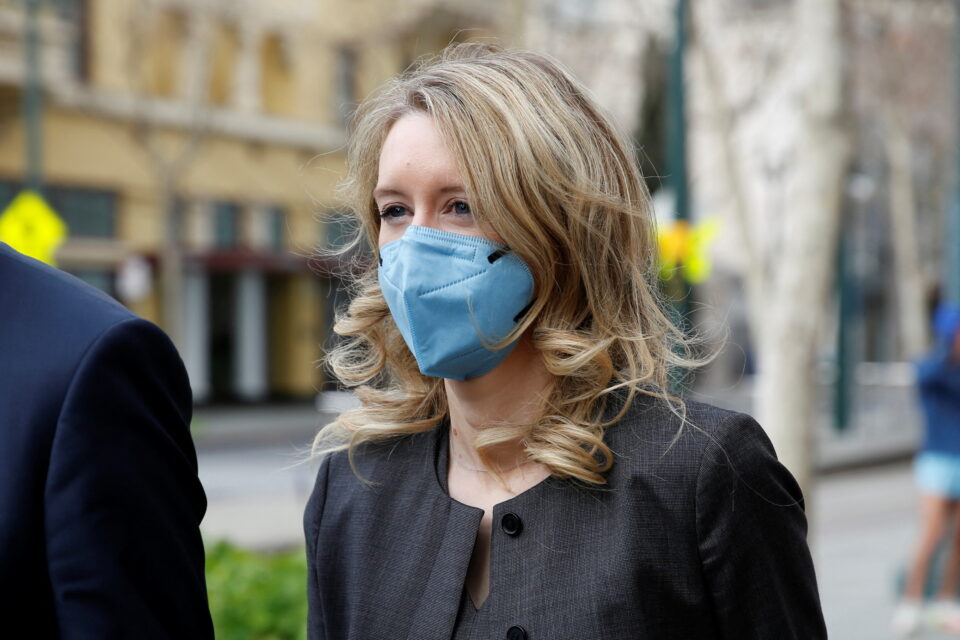 A US jury on Monday found Theranos founder Elizabeth Holmes guilty of defrauding investors in the blood testing startup, convicting her on four of 11 counts.

Holmes was convicted of investor fraud and conspiracy, but acquitted on three counts of defrauding patients who paid for tests from Theranos, and a related conspiracy charge. The jury could not reach a decision on three counts related to other, individual investors.

Holmes, wearing a gray suit, appeared poised after the verdict was read. A sentencing date was not immediately set.

Prosecutors said Holmes, 37, swindled private investors between 2010 and 2015 by convincing them that Theranos‘ small machines could run a range of tests on just a single drop of blood from a finger prick.

Holmes rose to Silicon Valley fame after founding Theranos in 2003 at age 19 and became known for her penchant for wearing Steve Jobs-like black turtlenecks. She attracted both high-profile wealthy investors including media mogul Rupert Murdoch and high-profile board members. Her net worth was estimated at $4.5 billion by Forbes in 2015.

She faces up to 80 years in prison when sentenced by US District Judge Edward Davila but will likely get a much lower sentence.

Holmes was also charged with misleading patients about the tests’ accuracy but was acquitted of those charges.

Holmes is likely to appeal, but her attorneys and a spokesperson for prosecutors did not respond to requests for comment on Monday. The jury’s verdict came after seven days of deliberations.

Theranos collapsed after the Wall Street Journal published a series of articles that suggested its devices were flawed and inaccurate. Holmes was indicted in 2018 alongside Theranos‘ former chief operating officer Ramesh “Sunny” Balwani, who had also been her romantic partner.

Balwani also has pleaded not guilty and will be tried at a later date.

During the trial in San Jose, California, which began in September, jurors heard testimony from former Theranos employees who said they left the company after witnessing problems with its technology.

Former patients testified that they would not have used Theranos‘ tests if they had known the tests were flawed.

Holmes was acquitted on charges of defrauding patients. Her attorneys had argued there was no statistical evidence showing errors were happening at such a high rate that Holmes knew the tests were inaccurate.

Investors testified that Holmes made a range of misleading claims about Theranos, including that its machines were being used in the field by the U.S. military.

Prosecutors said had Holmes been truthful with investors and patients, the venture never would have attracted critical funding and revenue.

“She chose fraud over business failure. She chose to be dishonest,” Assistant U.S. Attorney Jeff Schenk said at the start of closing arguments. “That choice was not only callous, it was criminal.”

Testifying in her own defense at trial, Holmes said she never meant to deceive anyone and said Theranos‘ lab directors were in charge of test quality. In closing arguments, defense attorney Kevin Downey said the evidence did not show Holmes was motivated by a cash crunch at Theranos, but rather thought she was “building a technology that would change the world.”

“You know that at the first sign of trouble, crooks cash out,” but Holmes stayed, Downey said. “She went down with that ship when it went down.”

THE RISE AND FALL OF ELIZABETH HOLMES

2003 – Holmes founds Theranos, then called Real-Time Cures, after dropping out of Stanford University. Then only 19 years old, Holmes aimed to revolutionize diagnostic testing.

2004 – The nascent company raises more than $6 million in funding, reaching a valuation of $30 million.

2010 – Theranos raises a further $45 million in funding, reaching a valuation of $1 billion.

2012 – The company moves to the former Facebook headquarters in Palo Alto, California.

2013 – Theranos begins promoting its technology, claiming to be able to run a wide range of tests on a single drop of blood using a machine called the Edison, and enters into a partnership with Walgreens Boots Alliance.

2014 – Having raised more than $400 million, Theranos is valued at more than $9 billion. Holmes is recognized by Forbes as a billionaire, thanks to her stake in the company.

February 2015 – An article in the Journal of the American Medical Association criticizes Theranos for failing to publish any of its research in peer-reviewed journals.

July 2015 – Theranos wins US Food and Drug Administration approval for a test to detect the herpes simplex 1 virus.

October 2015 – The Wall Street Journal reports that Theranos uses its technology for only a small number of its tests, and that employees doubt their accuracy. The FDA subsequently releases a finding that the company used unapproved devices for tests.

January 2016 – The U.S. Centers for Medicare & Medicaid Services (CMS) releases a report that one of the company’s facilities presents “jeopardy to patient health and safety.” The agency said an inspection revealed that the facility did not meet its own quality-control standards, including not properly calibrating equipment.

October 2016 – Partner Fund Management, which invested nearly $100 million in Theranos, sues the company for securities fraud, claiming it lied about its technology to secure the investment. The case is later settled.

April 2017 – Theranos reaches a deal with CMS barring it from the blood-testing business for two years.

March 2018 – The U.S. Securities and Exchange Commission charges Theranos, Holmes and Balwani with securities fraud. Holmes is stripped of her stake in and control of the company.

June 2018 – Holmes and Balwani are indicted on criminal fraud charges. Both plead not guilty.

September 2018 – Theranos announces that it will dissolve.

March 2021 – Holmes reveals she is pregnant.

August 2021– Holmes gives birth to her child. A court filing reveals that Holmes plans to argue she was under the control of Balwani, who she says was abusive, at the time of the charged crimes. Balwani denies the allegations in court filings.

November 2021 – Holmes takes the stand to testify in her own defense. She denies seeking to mislead investors and patients. She says Balwani was in charge of financial models provided to investors and that he was abusive in their relationship.

Jan. 3, 2022 – Holmes was convicted on charges of defrauding three other investors, as well as conspiring to do so. She was acquitted on three counts of defrauding patients who paid for tests from Theranos, and a related conspiracy charge. The jury could not reach a decision on three counts related to individual investors. A sentencing date was not immediately set. She faces up to 80 years in prison when sentenced by U.S. District Judge Edward Davila but would likely get a much lower sentence.

U.S. to send $4.5 billion more to Ukraine for budget needs