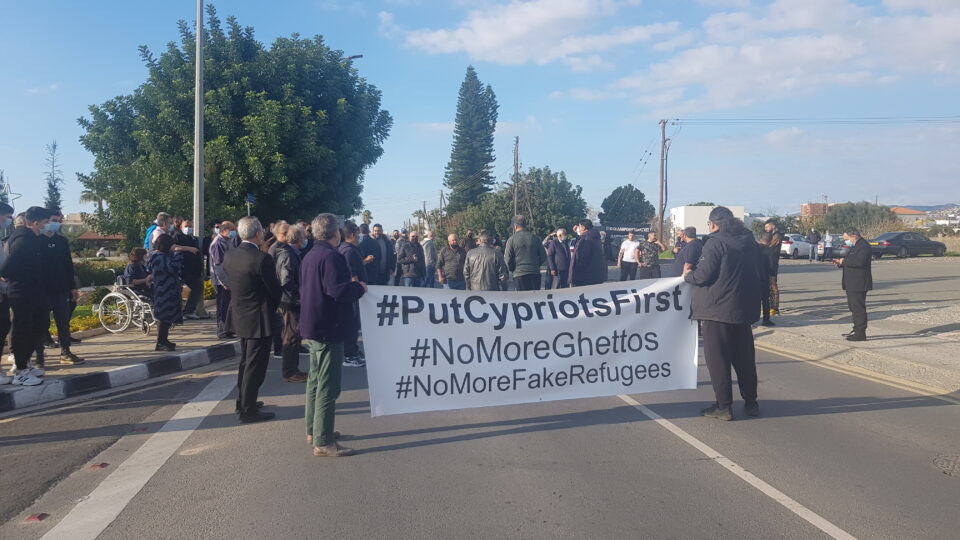 Chlorakas residents staged a  protest Friday evening complaining of ghettoisation of the area following an influx of illegal migrants and against a backdrop of heightened police operations after two massive fights involving third country nationals in the district.

Demonstrators gathered at the entrance to the village at 3pm and closed off the road leading to Chlorakas.

Organisers had also called on residents of nearby villages of Emba, Kissonerga, Lemba and Tala to take part.

Members of the social media group said they had requested the reopening of the police station in the village and referred to several other crimes, including a large number of burglaries, that occurred in the area.

During the protest, Chlorakas community leader Nicos Liasides described the situation in the village as “very problematic” for the past three years saying that residents feel insecure.

“Unfortunately the situation has reached the point of no return,” he said. “Ghettoisation must be avoided.”

Tryfonas Moussis, speaking on behalf of the residents, called on the government to assume its responsibilities. He did not rule out the continuation of dynamic measures.

George Pamporis, a teacher, said the residents wanted to send a peaceful message to those in charge that the situation “has reached a dead end”, adding that they were not “anti-immigrant” and that they welcome real refugees. “But we are against terrorism and all those who cause these incidents,” he said.

Disy MP Charalambos Pazaros expressed his full support to the residents of the Chlorakas for what they’ve been through for years.

He also welcomed the meeting between the ministers for interior, justice, welfare and the police during which, he said, some decisions were taken. MPs from Diko. Elam and Edek also attended the protests making similar statements that something needed to be done.

The protest follows two brawls in Paphos and Chlorakas that involved more than a hundred third country nationals, mostly Syrians, on Monday and Tuesday night.

Ten people have been remanded, including two who participated in both fights, police spokesman Christos Andreou told CyBC radio early on Friday. Another two people are wanted while more arrest warrants are expected to be issued on Friday following additional information, Andreou added.

The first fight occurred on Athinas street in Paphos at around 10.45pm on Monday, reportedly over a football game, with police saying participants were throwing rocks and assaulted each other with knives and clubs. One person, whose ribs had been broken, had to undergo surgery.

Officers had to fire warning shots to disperse the second fight that broke out the following night among 150 third country nationals at an apartment complex in Chlorakas at around 6.50pm. A car was damaged during the fight.

The specific complex hosts about 600 people, including asylum seekers, Chlorakas community leader Nicolas Liasides said after the incident while calling on the state to close it down.

During an operation on Wednesday night, nine apartments were searched, as well as 120 vehicles and 75 passengers. Four residents were taken to Paphos police headquarters where they gave a statement.

The operation was carried out between 5pm and midnight with Paphos police and members of the anti-riot unit MMAD and other directorates taking part.

Meanwhile, an interior ministry decree remains in place banning any more Syrian refugees from settling in the coastal village.

Interior Minister Nicos Nouris instructed police on Wednesday to implement a second decree providing for the closing of the apartment building where the third country nationals have settled.

He was speaking during a broad meeting under justice minister and police chief to discuss the matter.

The closure would force 279 residents of the complex who were granted additional protection status to seek a new place of residence while Nouris said some families will be transferred to Kofinou and Limnes reception centres.

The minster explained the building was deemed unsuitable for human habitation following “exhaustive health inspections” that showed water was unsuitable.

Measures will be taken against anyone responsible for violating the decrees in collaboration with the legal service, Nouris said. These include the owner of the complex who will also be questioned by the police with the possibility of a case being submitted against him in court.