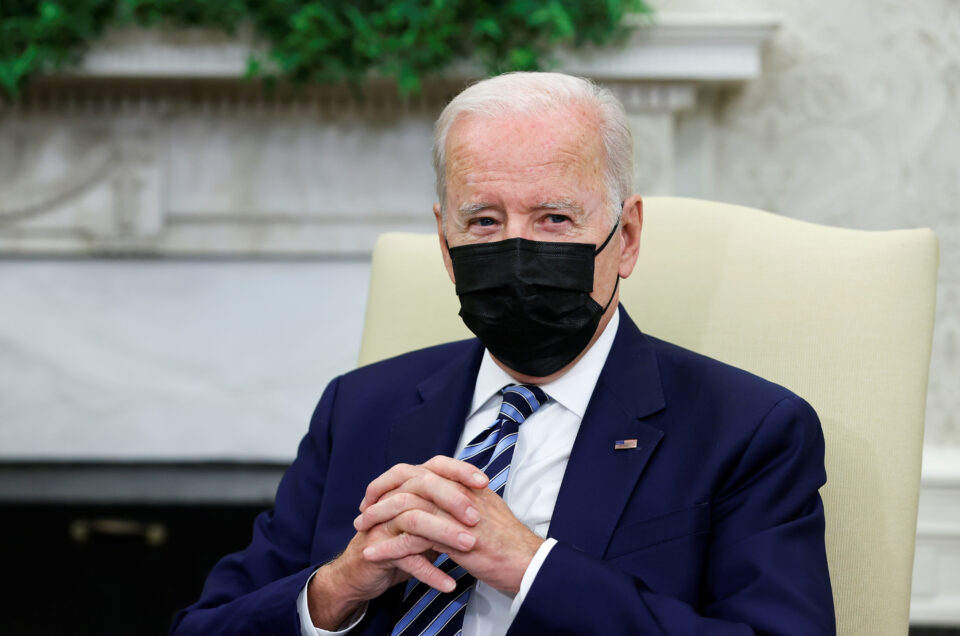 Conservative justices on Friday questioned the legality of President Joe Biden’s vaccine-or-testing mandate for large businesses as the U.S. Supreme Court heard arguments in a request by Republican state officials and business groups to block the policy at a time of surging COVID-19 cases nationwide.

The nine justices were hearing extended arguments in two cases that present a test of presidential powers to combat a public health crisis that has left more than 830,000 Americans dead. The second case involved the administration’s vaccine requirement for healthcare facilities.

The court’s 6-3 conservative majority in the past has shown skepticism toward sweeping actions by federal agencies.

The White House has said the two temporary mandates will save lives and strengthen the U.S. economy by increasing the number of vaccinated Americans by the millions.

The challengers have argued that the federal government exceeded its authority by imposing requirements not specifically authorized by Congress and failed to follow the proper administrative processes for issuing emergency regulations.

Friday’s first argument focused on a U.S. Occupational Safety and Health Administration (OSHA) requirement that workers at businesses with 100 or more employees be vaccinated or tested weekly – a mandate that applies to more than 80 million workers nationwide.

Chief Justice John Roberts wondered whether Congress or the states should have a say. Questioning U.S. Solicitor General Elizabeth Prelogar, who argued for the administration, Roberts appeared skeptical that the 1970 law that established OSHA gave that agency the power it needs.

“That was 50 years ago that you’re saying Congress acted. I don’t think it had COVID in mind. That was almost closer to the Spanish flu than it is to today’s problem,” Roberts said, referring to the pandemic that occurred a century ago.

Some justices raised the possibility of the court issuing a temporary stay blocking the rule while the court decides how to proceed. Some also wondered why the policy would be impermissible in the face of a historic pandemic.

“This is a pandemic in which nearly a million people have died,” said liberal Justice Elena Kagan. “It is by far the greatest public health danger that this country has faced in the last century. More and more people are dying every day. More and more people are getting sick every day. … And this is the policy that is most geared to stopping all this.”

“I would find it would be unbelievable to be in the public interest to stop these vaccinations,” liberal Justice Stephen Breyer said.

The state of Ohio and the National Federation of Independent Business took the lead in seeking to block that mandate.

Roberts appeared skeptical as to whether the OSHA mandate was specific to the workplace, noting that the administration has sought to enacted various mandates. As such, Roberts wondered if it is an issue that the court should address as a broad exercise of executive power.

“Why doesn’t Congress have a say in this … and why isn’t this the primary responsibility of the states?” Roberts asked.

Conservative Justices Neil Gorsuch and Brett Kavanaugh both wondered if the OSHA rule could be held as invalid under a legal doctrine that says Congress must provide a clear statement on a specific issue in order for a federal agency to be able to issue broad regulations on it.

“It’s not that judges are supposed to decide some question of public health, it’s about regulating the rules of a system to ensure that the appropriate party does. … Is this (a question) that has been given to agencies to decide or one Congress has make to decide as a major question under our federal system?” Gorsuch asked.

Conservative Justice Samuel Alito, while saying he is not anti-vaccinations, raised the question of potential risks to some people of getting the shots and asked whether OSHA has ever imposed a safety measure that imposes a “risk.”

Under the second policy being reviewed by the Supreme Court, vaccination is required for an estimated 10.3 million workers at about 76,000 healthcare facilities, including hospitals and nursing homes, that participate in the Medicare and Medicaid government health insurance programs for elderly, disabled and low-income Americans.

The Centers for Medicare & Medicaid Services (CMS), the federal agency responsible for administering the two programs, issued the rule. The states of Missouri and Louisiana are taking the lead in the arguments before the justices seeking an order blocking it.

The administration has argued that Congress gave federal agencies broad leeway to require employers to protect workers and Medicare and Medicaid patients from health and safety hazards.

The justices spent most of the pandemic working remotely but returned to in-person arguments in October. All nine are fully vaccinated, the court said. The court remains closed to the public.

As in many countries, vaccination has become a divisive issue in the United States, with some people adamantly opposed and many Republicans critical of mandates imposed by governments and businesses. The United States and countries around the world are facing an upswing in COVID-19 cases driven by the Omicron coronavirus variant.

Biden’s administration is asking the justices to lift orders by judges in Missouri and Louisiana blocking the healthcare worker mandate in half the 50 states while litigation on the legal merits of the policy continues.

The Cincinnati-based 6th U.S. Circuit Court of Appeals on Dec. 17 lifted an injunction issued by another court that had blocked the OSHA rule regarding large businesses, prompting challengers to ask the Supreme Court to intervene.

Decisions in both cases are expected quickly, with the administration’s deadlines for compliance looming.

Chlorakas residents say at the point of no return (Updated)