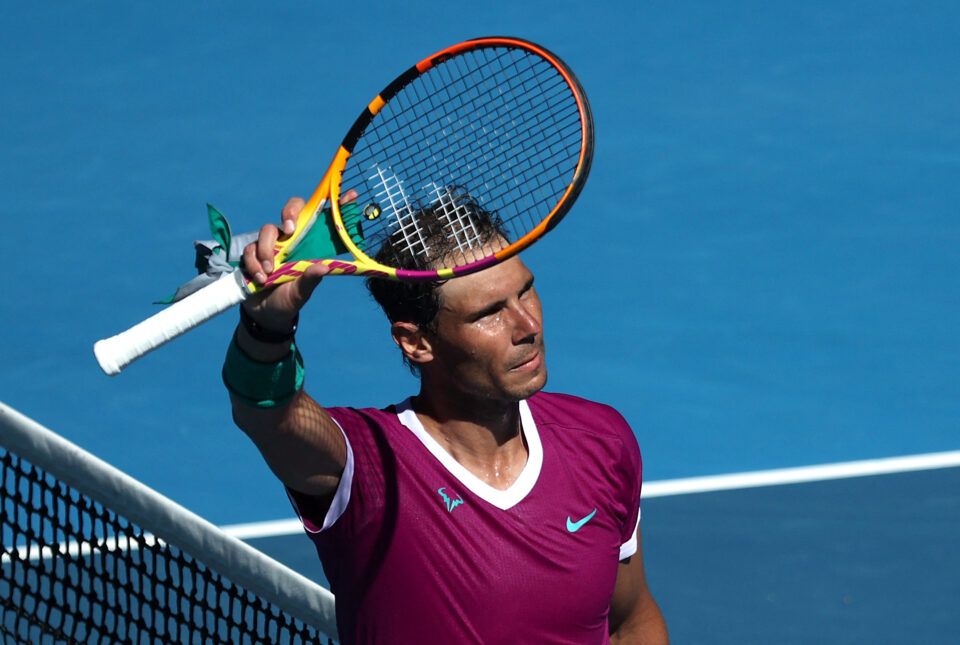 Highlights of the third day of the Australian Open at Melbourne Park on Wednesday, all times local (GMT +11):

Gael Monfils sealed a solid 6-1 6-0 6-4 victory over Alexander Bublik and will face Cristian Garin in the next round.

Third seed Alexander Zverev defeated local favourite John Millman 6-4 6-4 6-0 in under two hours and will face qualifier Radu Albot in the third round.

Fifth seed Maria Sakkari made light work of China’s Zheng Qinwen, romping to a 6-1 6-4 win to set up a meeting with Veronika Kudermetova in the third round.

Defending champion Naomi Osaka put on a dominant performance to swat aside American Madison Brengle 6-0 6-4 in the second round. The Japanese former world number one survived a couple of poor games in the second set to set up a clash with Amanda Anisimova.

French Open champion Barbora Krejcikova continued her charge at Melbourne Park with a routine 6-2 6-3 win over China’s Wang Xiyu. Up next for the Czech is Latvian 26th seed Jelena Ostapenko.

Unseeded Adrian Mannarino caused an upset as he breezed past 10th seed Hubert Hurkacz of Poland 6-4 6-2 6-3 on John Cain Arena.

Amanda Anisimova stunned Olympic champion Belinda Bencic to progress to the third round with a clinical 6-2 7-5 victory. Anisimova, who won in Adelaide earlier this month, will play defending champion Naomi Osaka.

“(I) knew going into it that it’s going to be tough… But I did a good job of just flipping the script, kept fighting, and, yeah, really happy to get away with it,” said Shapovalov.

Seventh seed Matteo Berrettini overcame a minor hiccup in the second set to move into the third round with a 6-1 4-6 6-4 6-1 win over American Stefan Kozlov.

The Italian will next face 18-year-old Carlos Alcaraz, who became the youngest man to reach the third round at Melbourne Park since Bernard Tomic in 2011 after a 6-2 6-1 7-5 thrashing of Dusan Lajovic.

Rafa Nadal continued his quest for a 21st Grand Slam title with a 6-2 6-3 6-4 victory over German qualifier Yannick Hanfmann, finishing with a blistering forehand. Up next for the sixth seed is Karen Khachanov.

1540 SVITOLINA PLEASED TO HAVE MONFILS BY HER SIDE

Elina Svitolina, who married fellow professional Monfils last year, said she was lucky to have found a partner who understands the demands of elite-level tennis.

“It’s important to have someone who understands what I’m going through … This sometimes can get complicated. The mental part is very important,” Svitolina said.

“For me to have Gael next to me at the same big events, it’s lucky in our situation that we’re both at the top of our sport so we’re travelling pretty much the same tournaments.”

1445 KEYS MOVES INTO THIRD ROUND

Eighth seed Paula Badosa said playing on Rod Laver Arena following a breakthrough 2021 in which she tested positive for COVID-19 ahead of the Australian Open felt special.

“I’m really proud of myself… one year ago I was locked in a room,” Badosa said after beating Martina Trevisan. “Being here and playing centre court, because of me, not because I’m playing a seeded player, because now I’m the seeded player, I’m happy.”

1337 BARTY TOO GOOD FOR BRONZETTI

Earlier, 15th seed Elina Svitolina advanced when Harmony Tan retired from their match with a knee issue and left the court in a wheelchair. Tan was down 6-3 5-7 5-1 when she got injured.

Camila Giorgi reached the third round at Melbourne for the fourth time with a 6-2 7-6(2) win over Tereza Martincova.

1230 AZARENKA, BADOSA THROUGH TO THIRD ROUND

Azarenka, the 2012 and 2013 champion, sealed a 6-1 6-2 victory over Swiss Jil Teichmann with a backhand winner, while Badosa firmed as a dark horse for the title with an equally dominant 6-0 6-3 win over Martina Trevisan on Rod Laver Arena.

Play at Melbourne Park got underway on all courts as scheduled on day three of the year’s first Grand Slam.

A warm day is expected for the second round matches with the temperature already at 23 degrees Celsius (73 degrees Fahrenheit) with a high of 28 forecast.