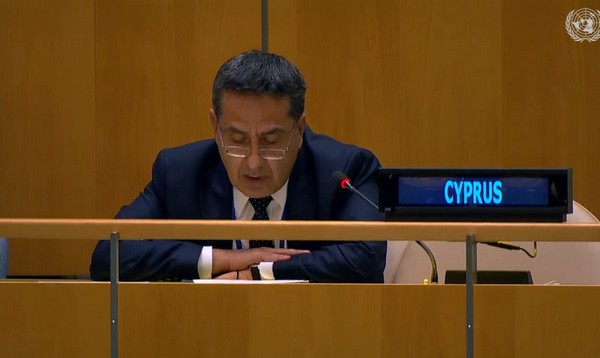 Permanent Representative of Cyprus to the UN, Ambassador Andreas Hadjichrysanthou, has expressed the hope that the Secretary-General will be in a position to appoint an envoy to facilitate the resumption of the peace process as soon as possible.

He made the remark on the Report of the Secretary-General on the work of the organisation, during Friday’s deliberations as part of the 76th Session of the United Nations General Assembly.

Thanking the Secretary-General for his report and his stewardship of the United Nations in the past five years, including his personal involvement in the efforts to settle the Cyprus problem, Hadjichrysanthou wished Antonio Guterres “a productive and successful second term”.

He said Cyprus supports “the focus on the five emergencies laid out by the Secretary-General” and agrees “that the challenges we face essentially represent failures of global governance and that our priority should be to keep multilateralism fit for purpose”, the Cypriot diplomat said.

On the report of the Secretary-General on peace and security, Hadjichrysanthou said for us there is only one element we can use as a barometer for the UN’s effectiveness in the maintenance of peace and security and that is the organisation’s ability to uphold the prohibition of the use of force. The statement of the Secretary-General today that we face the highest number of violent conflicts since 1945 indeed rings the alarm that we must do better, he noted.

Relations among states are more polarized than they should have been 30 years after the end of the cold war. We share the Secretary-General’s concern about the deepening East-West divide, as well as the risk of ending up with a fragmented, or even parallel, global systems in the future.

At the same time, multilateralism is still, not only the best, but the only framework for an effective, international system of collective security that will ensure equality in security for all, the non-tolerance of threats, consequences for aggressors and justice for the victims. Where unlawful use of force cannot be prevented, the UN must ensure that its results are neither accepted, nor legitimized.

He also said Cyprus concurs with the emphasis placed by the Secretary-General on conflict prevention, including in his proposed New Agenda for Peace. At the same time, the plethora of existing conflicts should not be left behind.

Noting the Secretary-General mentioned a number of these conflicts, including Cyprus, “we continue to be grateful for his good offices mission to reunite Cyprus as a bi-zonal, bi-communal federation with political equality as set out in relevant resolutions of the Security Council,” said the Cypriot diplomat. He also noted “we hope that the Secretary-General will be in a position to appoint an envoy to facilitate the resumption of the peace process as soon as possible”.

Stressing that the pandemic has resulted in the concentration of even more wealth in the hands of a few, creating a dangerous chasm, Hadjichrysanthou said as the international community, we need to design more, and better, equalizers to avoid a dystopian future where extreme wealth, or poverty, are the norm.

On the climate crisis, he said it is an existential one for many, mostly small states that bear little responsibility in creating it.

As a conflict state with part of its territory under occupation, and a country that has been experiencing the consequences of climate change for years, Cyprus, he said, “is also extremely concerned about the threat posed to peace and security by climate change. The inability to share the burden of migrant flows gives rise to questions as to how the massive displacement of people due to climate change, which is already happening, will be dealt with”.