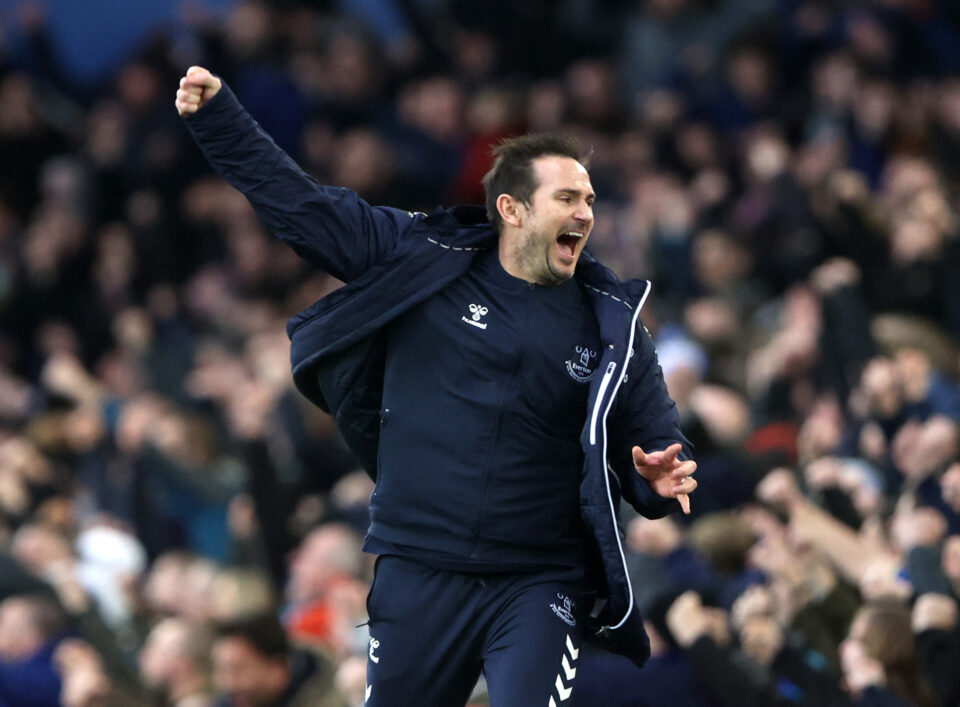 Everton thrashed fellow Premier League side Brentford 4-1 at home in the FA Cup fourth round on Saturday as Frank Lampard got off to a strong start in his first game as manager.

Yerry Mina headed Everton in front at Goodison Park in the 31st minute from a corner after coming on as a substitute for the injured Ben Godfrey. The Colombian defender went straight across to embrace Lampard, named as Rafa Benitez’s successor last week.

Brazil international Richarlison doubled Everton’s advantage three minutes into the second half, quickly nipping in behind the defence and beating Brentford goalkeeper David Raya to the ball before tucking it into the near corner.

Brentford got back into the game thanks to a penalty from forward Ivan Toney, who could have snatched an equaliser a few minutes later but narrowly missed the target.

Andros Townsend rounded off a fine debut in the Everton dugout for Lampard by hitting a fourth goal for the hosts in added time with a thumping strike from just inside the area.

Lampard, who had been out of work for just over a year after being sacked by Chelsea, said his first match in charge of Everton “was something very special” and challenged the team to keep progressing as they bid to steer clear of the relegation zone.

Everton are 16th in the Premier League on 19 points, four above the relegation zone. They visit fellow strugglers Newcastle United on Tuesday in Lampard’s first league game with the club.

“We all hear about the Goodison effect and we wanted to bring that out today – the way the players played did that,” former England international Lampard said.

“It got me excited. Now we need to calm down and look ahead to some important league games. We have a lot of work to do, but I saw some really promising signs.

“We’re an Everton team, so we must be aggressive, sprint, tackle when the ball is there to be won. That was there today and it must continue.”

Manchester City overcame an early wobble as Riyad Mahrez struck twice to help them ease past second-tier Fulham 4-1 in the FA Cup fourth round at the Etihad Stadium on Saturday.

A frenetic opening saw the Championship side grab a surprise lead through Fabio Carvalho in the fourth minute before Ilkay Gundogan levelled for the Premier League leaders, firing home from close range after being played in by Mahrez.

The 19-year-old Carvalho, who came close https://www.reuters.com/article/instant-article/idUKKBN2K90X3 to signing for City’s title rivals Liverpool on transfer deadline day, finished off a well-worked move to give the visitors hope but Marco Silva’s side failed to make the advantage count.

Fulham’s early spark was completely extinguished 13 minutes in when centre back John Stones rose highest to turn in a Kevin De Bruyne corner for his second goal of the season.

A full-strength City ran Fulham ragged after the break as they created chances at will and secured the win through a quickfire double from Mahrez, the first coming from the penalty spot in the 53rd minute after Jack Grealish was brought down following a fine solo run.

De Bruyne turned provider again three minutes later when he latched onto a stray pass from Fulham’s Harrison Reed to gallop forward and tee up Mahrez whose right-foot shot took a slight deflection off Tim Ream.

“It was a typical FA Cup tie. They started better, scored first. I’m glad we scored quick and then took the lead. Overall it was a good game and we controlled it,” said City midfielder Fernandinho.

“The FA Cup is really important for everyone at Man City, especially the players. I hope we can reach the final.”

Silva was proud of his team, who sit top of the Championship.

“I think everyone in this stadium felt that Fulham Football Club was here and we showed what we are capable of,” the Portuguese, who formerly managed Watford and Everton in the Premier League, told reporters.

Scotland edge out England at Murrayfield