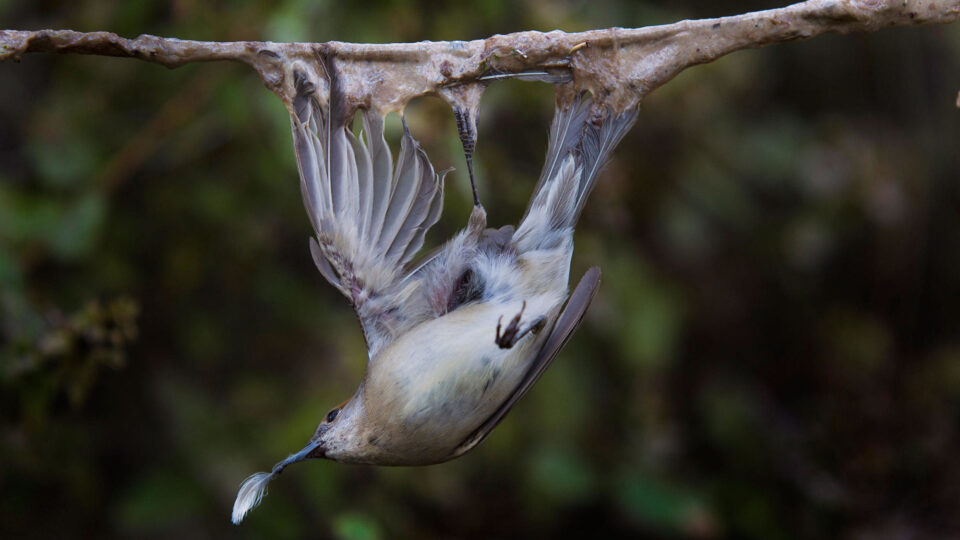 A bird trapped on a limestick (Birdlife Europe)

Over the last two years, parliament has approved relaxations that mean the penalty for limesticking has been slashed to just €200 for up to 50 birds

It is coming back, creeping into to an olive grove or acacia thicket near you. Bird trappers are poised and waiting to spread their particular brand of slow death across the countryside again; if indeed they ever truly went away…

This is an old and ugly story, and you have probably heard most of it before. But it bears repeating. In fact, it has to be repeated. Again and again, until this scourge actually goes away for good. And at the moment, what we are faced with is a reversal of hard-won conservation gains, ground out over the past 20 years.

The trappers and black marketeers trading in wild birds, those who are making big money out of out-lawed ambelopoulia “delicacies”, would like nothing more than for you to grow tired of hearing about their activities. This illegal and lucrative kill thrives on being in the shadows, unseen. We can’t let that happen.

Illegal bird trapping is not only cruel, it is an ecological anathema; totally unsustainable. Using glue-sticks, mist nets and electronic calling devices to lure birds to a sticky, tangled death has been illegal in Cyprus since 1974. This illegal status was then ‘nailed down’, first by the Council of Europe and then by the European Union, as Cyprus signed up to both. Today, the law – at both EU and Cyprus level – clearly states that it is illegal to trap wild birds, to trade in them or put them on a restaurant menu, whether in writing or ‘unofficially’. It is also illegal to eat ambelopoulia.

This blanket ban is not imposed on ethical grounds, though concerns over animal welfare were part of what led Europe to ban trapping across the continent. Trapping is illegal because the catch is both large-scale and indiscriminate. If you go out to shoot birds with a gun, you can – in theory at least – limit both the number and identity of what ends up in your hunting bag. Shooting can be sustainable. Not so with limesticks or nets: there is no way to control how many or what species end up dead. And no, despite what the trapping apologists will try to tell you, it is not feasible to release some trapped birds, such as owls, from nets or limesticks, and keep others. To do so calls for more skill than trappers usually have or certainly care to employ. It takes years of training for a licensed bird ringer, trapping and releasing with painstaking care and for scientific purposes, to learn how to do it right.

Bird trapping is also completely unnecessary. There is no need or justification for it. It is not a ‘beautiful tradition’ as those who defend it – and we are witnessing a resurgence of these ‘defenders of the slaughter’– insist. There are plenty of other traditions and traditional approaches that we have, as a society, left behind, from wearing a vraka to defining a woman’s place as being confined to the home. Trapping is also a deeply distorted tradition, the addition of nets and electronic calling devices multiplying the kill. It may have started as a way to add some meat and fat to a meagre peasant diet, at a time when migratory birds were abundant. Today though, it is big business, worth millions, and migratory birds are among the most threatened wildlife groups, trapping adding to the growing impact of habitat loss, climate change, pollution, agro-chemicals, etc. Limesticks and nets have no respect for rarity: shrikes, flycatchers, owls and falcons end up among the ‘by-catch’ (though shrikes and flycatchers also end up served up as ambelopoulia…).

Over the past two decades, the concerted efforts of BirdLife Cyprus (backed by BirdLife partners in the UK and Germany, the RSPB and NABU) have forced trapping down. By over 90 per cent compared to levels in the early 2000s, in fact. This represents a significant conservation gain: millions of birds have been saved. It represents a victory for common sense and the common good (not to mention for the reputation of our island abroad).

Other local NGOs – such as Terra Cypria and Friends of the Earth – have supported this huge effort. Visiting activists, notably the eco-warriors of CABS, who have the scars to bear witness to the ugly violence of the big trappers, have played a big part. And special mention must go to the undercover experts of the RSPB Investigations Team, not least for their key role in building a real partnership for ‘enforcement-with-bite’ between BirdLife and the British bases (SBA) police. (It can be said with some confidence that gone now are the dark days when Cape Pyla, in the Dhekelia SBA, was one of the worst trapping black-spots in the Mediterranean).

The BirdLife effort has not been just about the risky business of watching, recording and reporting from the field, making sure trappers cannot hide in their olive groves and acacia thickets. It has extended to demanding and securing much more effort from relevant authorities in Nicosia, London and Brussels. Crucially, our anti-trapping campaign has also placed a big onus on shining a light on the slaughter, mostly through the media, and also on ‘changing hearts and minds’, with a focus on schools. Getting schoolkids to grasp the true impact of eating expensive ambelopoulia is key to ending demand and driving out trapping.

But there is a new and worrying twist to this tale. We have come all this way, only to now face the very real threat of a resurgence in trapping. This is all too plain-to-see in the trend data BirdLife Cyprus draws from its systematic field monitoring. To blame for this are our politicians and key decision makers.

Over the last two years, our parliament has approved relaxations to the Cyprus hunting law that mean the penalty for limesticking (or shooting) the trappers’ favorite targets – 14 species including Blackcaps, Chiffchaffs, Bee-eaters and Golden Orioles – has been slashed to just €200 for up to 50 birds. This compares to a fine of €2000 for killing even one bird not on this list of 14 trappers’ favorites, including legitimate game birds. Get caught with one Song Thrush on a limestick and you pay a €2000 on-the-spot fine. But if you are found with 50 Blackcaps on your limesticks, or the same number of shot Bee-eaters strung on your belt, you are liable to a ‘slap-on-the-wrist’ fine of €4 per bird.

This relaxation equates to an invitation to trap or shoot the most sought after birds for serving up as ambelopoulia. The impact is beginning to be seen in the field, and also in the growing, and increasingly open, support for trapping.

These disastrous relaxations were tabled before the House by the relevant authority, the Game & Fauna Service, and voted in by our fine parliamentarians, with few dissenting voices. The law changes make sense only if you accept as paramount a need to appease those among the electorate, and those in the pro-trapping and even the hunting community, who are diehard supporters of indiscriminate bird killing. Over 14,000 people have signed a protest petition, handed to House president Annita Demetriou by BirdLife late last year.

The EU is yet to demand a reversal of this undermining of the legal framework protecting wild birds in Cyprus, a backsliding that flies in the face of the EU Birds Directive. This hesitation could be fatal, allowing trapping to gain a new foothold.

It is time to shout about bird trapping again; time to ‘call out’ those who support this abomination, a wildlife crime which simply has no place in a civilised society.

Our View: Housing policies do not always benefit those in most need