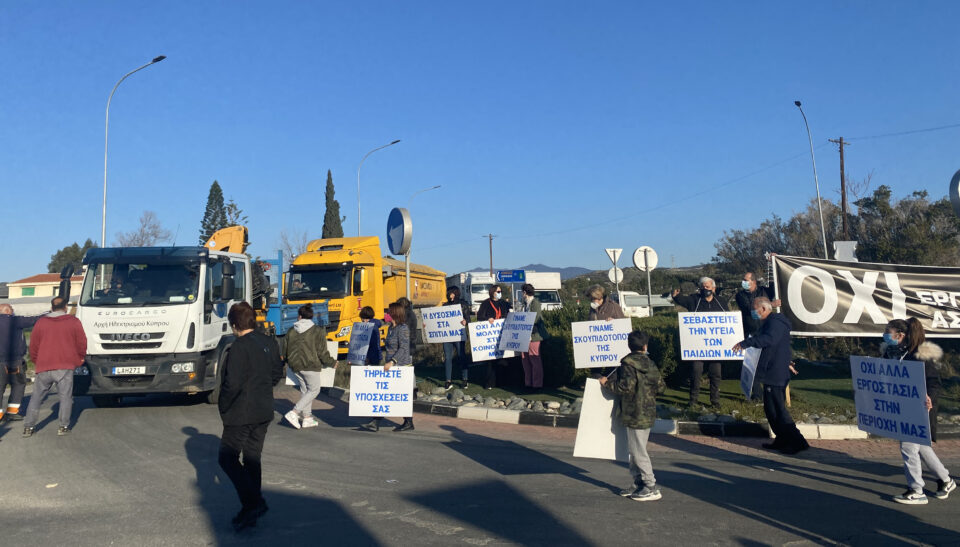 A previous protest of Vasiliko communities

The nine communities living near Vasiliko staged a demonstration on Friday morning to protest the imminent relocation of two asphalt plants to the area, which the government has scheduled three months from now.

Scores of people including children gathered around 8am at the Kalavasos roundabout, blocking traffic from all sides with community council vehicles and holding placards reading “We are not second-class citizens,” “Whatever is unwanted comes to our area” and “Respect our children’s health”.

The plants, which were originally located in the industrial areas of Geri and Tseri, are set to be relocated to Vasiliko in the next three months as a result of a decision prohibiting their operation in the Nicosia communities.

The decision was announced on Thursday by the attorney general’s office, which said it was a result of a successful appeal filed at the Supreme Court against the decisions of Nicosia district court by the communities, demanding the relocation of the plants.

Kalavasos community leader Lefteris Foka, who also headed a coordinating committee uniting the nine communities, told the Cyprus News Agency that the communities were protesting because they felt their repeated calls were not being heard.

“For the past year we have been clear to the government, that we will not accept the relocation of the factories to our area, which is already heavily affected by other factories”.

The Vasiliko industrial area is already hosting fuel terminals, the island’s largest power station, a cement factory, and will also have the energy hub. A waste management plant is also located in the wider area.

“We are observing the sensitivity with which the state has handled the issue when the factories were in Yeri and Tseri, but in our case it seems like our own children’s health has not been considered,” he said.

Citing the 2011 accident in Mari, Foka argued that placing all of the island’s energy sources in one place is dangerous, as an accident or sabotage could paralyse the entire republic’s energy supply once more.

He added that the nine communities have been blocking the construction of factories processing dangerous chemicals in the area since 2013, and had suggested a different area is found for fuel storage.

“We are tired of the government’s promises on this issue,” Zygi community leader Georgia Michael said, adding that the communities can no longer stand the constant accumulation of factories in the area.

“It is not possible for the entire economy of Cyprus to be accumulated in a single region”.

Michael explained that as a result of new factories, the industrial area in Vasiliko is now just 500 metres from residential areas, forcing Mari residents to relocate to Zygi despite the fact their community is located “miles away from the industrial area”.

Maria Georgiou, a Zygi resident, echoed Foka’s statements, calling on the state to show the same sensitivity they have shown for the communities of Tseri and Geri. “We want them to keep their promises and stop any more heavy industry from moving to the area”.

The plants have affected the Geri and Tseri communities and municipalities, while residents of nearby Dali have held many protests against their operation on the grounds of public health.

Although officials had said the move will take place in six months, a recent presidency statement said the relocation to Vasiliko area will be completed in the next three months.

The Supreme Court decision will come into effect 21 days after the relevant order is issued and until the conclusion of the lawsuits, or until the court issues another order.

“It was a given to us that the asphalt factories would not be transferred to our area, but unfortunately this is now happening,” Georgiou said. “As it is a Supreme Court decision, it’s one we cannot dispute”.

Language café to pop up in Nicosia