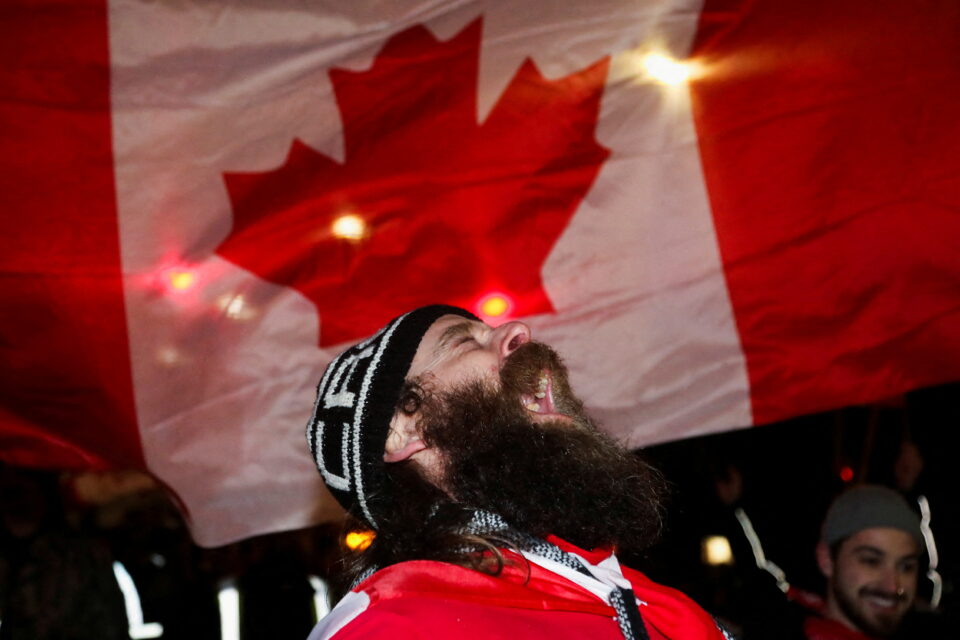 The order came into effect at 7 p.m. Eastern Time (0000 GMT), but five hours after the deadline, some 100 protesters were milling around the entrance to the bridge, waving Canadian flags.

While the number of protesters and police dropped as the night progressed, demonstrators continued to block the bridge with trucks and pick-up vans, preventing any flow of traffic in either direction.

Protesters sang the Canadian national anthem and midnight, and some shouted “Freedom!”

Police, who started to gather in a parking lot a few blocks away from the protesters, began handing out pamphlets that outlined penalties under Ontario’s emergency order, which took effect at midnight.

Trudeau earlier told reporters that no action was off the table.

Companies have diverted cargo to stem losses amid production cuts by companies including Ford .

Superior Court Justice Geoffrey Morawetz on Friday approved the request by auto industry associations and Windsor city authorities hoping to end the protests. Occupying access roads leading to the bridge  on Friday, protesters voiced defiance and there was little sign of them backing down.

“Canada is supposed to be a free country,” said Liz Vallee, a protester from Chatham, Ontario. “When that freedom is threatened, we must stand up.”

Vallee said she and others would stay until all pandemic mandates are lifted.

The protests have inspired similar convoys and plans in France , New Zealand, Australia and the United States, whose Department of Homeland Security is working to ensure that a “Freedom Convoy” event due in early March in Washington, D.C., “does not disrupt lawful trade.”

East of Ottawa, people were expected to gather in Fredericton in the province of New Brunswick for a weekend demonstration. Local police said officers were stationed at entrances to the city to ensure traffic can continue. Canada‘s financial capital Toronto was also bracing for more weekend demonstrations.

Adding to calls for action by U.S. officials and business leaders, Biden expressed concerns over auto plant closures and production slowdowns during a phone call with Trudeau, the White House said in a statement.

“The two leaders agreed that the actions of the individuals who are obstructing travel and commerce between our two countries are having significant direct impacts on citizens’ lives and livelihoods,” the statement said.

“The Prime Minister promised quick action in enforcing the law, and the President thanked him for the steps he and other Canadian authorities are taking to restore the open passage of bridges to the United States,” it added.

Trudeau told reporters that he agreed with Biden that the blockades cannot continue. “Everything is on the table because this unlawful activity has to end and it will end,” Trudeau said.

Biden’s administration had urged Canada to use federal powers to ease the Ambassador Bridge blockade, a step Trudeau’s government has not taken. Trudeau said on Friday his government was not seriously contemplating calling in the military over the protests.

The leader of Ontario, where police have avoided using force to disperse protesters, sought to build pressure on Friday by threatening C$100,000 fines and up to a year in prison for non-compliance.

Announcing the penalties as part of emergency measures, Ontario Premier Doug Ford said they were needed to “make crystal clear it is illegal and punishable to block and impede the movement of goods, people and services along critical infrastructure.”

Windsor police issued a statement warning of arrests, but it was not clear if or when authorities would begin issuing fines or seeking jail sentences.

The stock of Canadian autoparts maker Magna International fell 6.4% on Friday after it said it had seen an initial hit from the bridge’s closure.

The bridge’s shutdown could worsen the tight supply of new vehicles in the United States and contribute to the already fast-rising price of new vehicles, IHS Markit said in a Friday report. Even if the blockade ends, a return to normal will take several weeks as shortages cascade through the supply chain, IHS Markit said.

Governor Gretchen Whitmer of Michigan, home to nearly a fifth of U.S. car production, told CNN: “The Canadian government has to do whatever it takes to safely and swiftly resolve this.”

Biden and Putin to speak as Ukraine warnings mount

A moral call to action: the lesson from Jan Karski