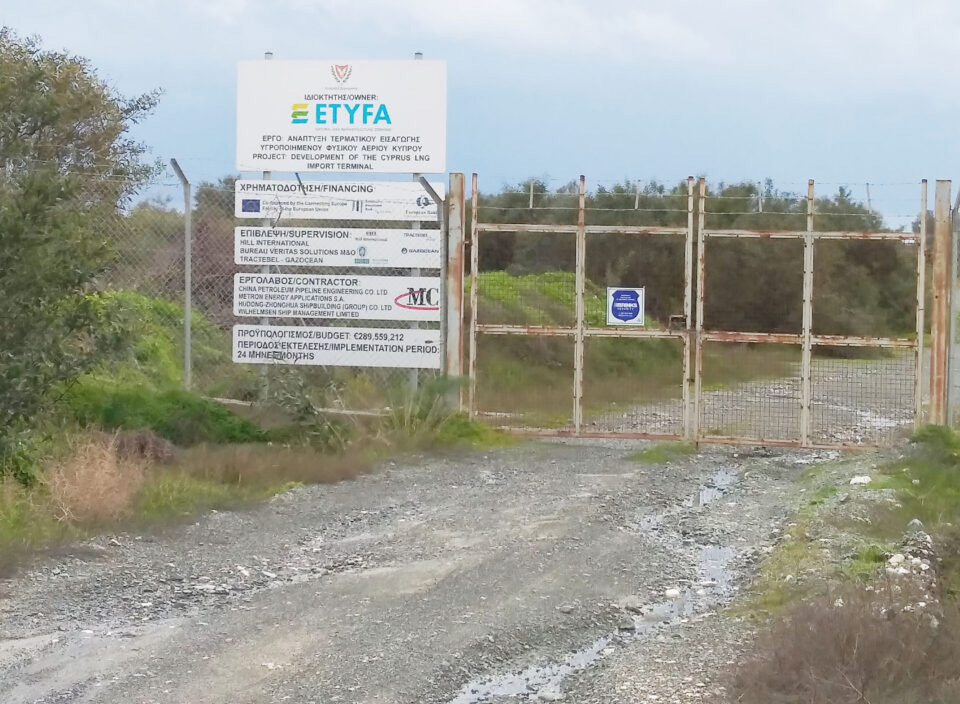 The LNG site at Vasiliko

It was triumphantly hailed by the government as the biggest and most important energy project ever undertaken by the Cyprus Republic, when the contract for the LNG import and regasification terminal was signed in December 2019, but nothing has gone according to plan since then. On the contrary, everything appears to be going wrong with its completion being put back by a year (the optimistic scenario) and the contractor already putting in a claim for an additional amount of money.

Worse still, two years after the contract was signed, very little work has been done, one industry source telling the Sunday Mail that the project is just at 4 per cent. Construction of the jetty at Vasiliko (plans are 90 per cent ready according to the energy minister) and other related facilities has not started, while the conversion of the LNG carrier to a floating storage and regasification unit (FSRU), is still in progress in Shanghai with the company citing huge delays in obtaining materials and equipment from different parts Europe. The blame for the delays has been placed on the disruption caused by pandemic which has also pushed up prices of material and equipment.

Our regular columnist and energy expert, Charles Ellinas, spoke about a possible cost-overrun of about €100 million because of the delay combined with supply problems and the rising prices of equipment and materials. The China Petroleum Pipeline Engineering (CPPE) which leads the consortium that has the contract for the project had reportedly put in such a claim, but energy minister Natasa Pilides insisted the amount would not exceed 10 per cent of the total cost of €290 million. The decision on additional payments would be taken by the Central Committee of Changes and Claims, she pointed out, but nobody knows by the end of the project what the cost over-run would amount to.

While there is no doubt that the pandemic has contributed to delays and cost-overruns, we cannot discount the fact that the project was awarded to a consortium led by a company that specialises in pipeline construction and had no experience in building LNG facilities. Bizarrely, two other consortia, with experience at building LNG facilities, were disqualified at the technical stage of the tenders’ procedure, leaving the CPPE-led consortium on its own to negotiate terms without any competition. It beggars belief that a complicated and difficult, €300 million project was left to a consortium that had never built LNG facilities, while the two consortia that had the expertise were disqualified at the technical stage.

A similar decision, with disastrous results, was taken during President Anastasiades’ first term when the contract for a waste treatment plant in Pentakomo was awarded to two companies with no experience or expertise in waste treatment, because they made the lowest bid. The treated waste is being buried in the ground (the plant was set up because the EU wanted all landfills closed) and the contractor has put in claims for additional payments by the state. We can only hope that the same mistake has not been made in the case of the LNG terminal, because the economic consequences for the country would be much worse.

Auditor-general Odysseas Michaelides criticised the tenders process, but on the surface everything was done by the book. That technical requirements were included in the tender documents that two international consortia could not, or would not, satisfy is very peculiar indeed. This does not necessarily mean the specs were compiled in a way to help a specific bidder – something that has been known to happen – but that there was a high level of ineptitude by those who prepared them, even if they were considered experts in the field. There is also a tendency, among state officials, to think they have a duty to make things as difficult as possible for bidders.

Whatever the reason, a tenders’ process that leaves just one bidder, with no expertise in building LNG facilities can only be described as faulty. Making the project even more difficult, the ‘Engineering, Procurement, Construction, Management’ contract also stipulated that the jetty would act as a ‘gas station’, supplying vessels that use LNG with fuel. There are complex technical and safety requirements to set up such a jetty, prompting an industry insider to describe it as “probably the biggest showstopper.”

The government, Defa and Etyfa are not in a strong position. They are in a corner, and it is questionable whether they would be able to re-negotiate the agreement with the contractor securing a fixed project schedule and budget. This would be the least harmful solution, so long as the additional cost is not prohibitive, because the project would be completed, even if it would be in 2024. If the two sides do not agree and the dispute goes to arbitration, the project would be put on hold until it is resolved.

Perhaps the government should also calculate the cost of abandoning the project – this might be cheaper than allowing it to continue without agreement on a fixed schedule and budget. Whether the state services and consultants could be relied on to make accurate calculations on costs and take the right decision, given the mess they have created so far, is another matter.

Tales from the Coffeeshop: Gesy is a conquest of the doctors

North is ‘the back yard of the mafia’